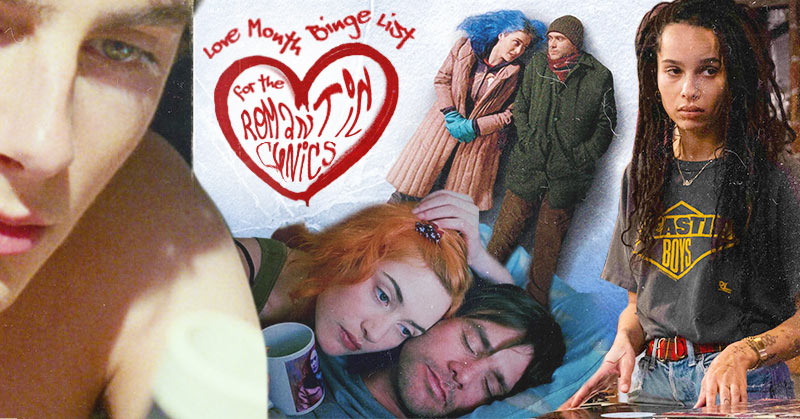 Maybe you’re a film snob or just have contrarian tendencies, or perhaps you’ve been burned in the past and are now jaded to conventional movie romance. But whatever the reason, the notion of spending an hour and forty minutes sitting through a Jennifer Aniston-led rom-com may not appeal to everyone, and could in fact induce acute eye rolling. For those that want to enjoy a true “romantic” movie that is mostly bereft of the traditional Hollywood-based algorithm, this Love Month list is for you.

Eternal Sunshine of the Spotless Mind

Jim Carrey and Kate Winslet play a broken-up couple that delete each other from their respective memories. It is an emotionally moving picture with plenty of lucid and surrealist imagery by director Michel Gondry.  Also, Jim Carrey’s transition from 90s screwball comedian to serious actor (but still slightly screwball) is noteworthy.

John Cusack plays a vinyl record store owner managing the after effects of a sudden breakup; ironically, there are a lot of laughs in the process. Jack Black plays a supporting role as an unruly record store clerk but steals every scene he’s in.

Paul Giamatti plays a morose divorcee and aspiring writer who embarks on a road trip to Northern California wine country with his fun-loving best friend. It is equal parts hilarious and tragic, but ultimately makes for a rewarding viewing experience. This may be Alexander Payne’s finest work to date, and is perfect for cynics this love month.

Even if you’ve decided to cancel Woody Allen, there is no denying his longevity as a filmmaker. Out of his expansive body of work (dating to the mid-60s), Annie Hall is often considered his best. Allen and Diane Keaton star in this New York romance that paints an earnest picture of the highs and lows of a relationship, with a lot of neurotic witticisms along the way. This movie was released in 1977 yet still manages to feel fresh and contemporary.

Eighteen-year-old Jamal Malik (Dev Patel) answers questions on the Indian version of Who Wants to Be a Millionaire, flashbacks (both painful and uplifting) show how he got there and eventually navigate back to his childhood love. This movie has it all: a love story, drama, Bollywood dancing, third world grit. It’s a definite epic and has the accolades to prove it.

Call Me By Your Name

Elio (Timothee Chalamet) and Oliver (Armie Hammer) meet in rural Northern Italy, and an unconventional affair blossoms. It’s a touching film with spectacular views of the lush Italian countryside, not to mention an otherworldly soundtrack.

A British period epic starring Kiera Knightley and James McAvoy, whose onscreen romance is abruptly halted after McAvoy’s character is falsely accused of a crime, thereby changing the course of several lives forever. If you’re into period films, this one is accessible as they come. Just keep tissues within arm’s reach; it is love month after all, and the emotions might run wild.

Bill Murray and Scarlett Johannsen make an unlikely, ambiguously platonic yet heartfelt connection as they struggle to find meaning amidst a magical Tokyo backdrop. This is Sofia Coppola’s debut film, and is the moment she effectively stepped out of her legendary father’s shadow.

The first of three installments, Before Sunrise stars Julie Delpy and Ethan Hawke as young twenty-somethings that meet on a train traveling Northern Europe, and the chemistry is instantly palpable. A fairy tale without being one and an absolute classic.

RELATED: 2022 Dating Trends for the Single and Coupled