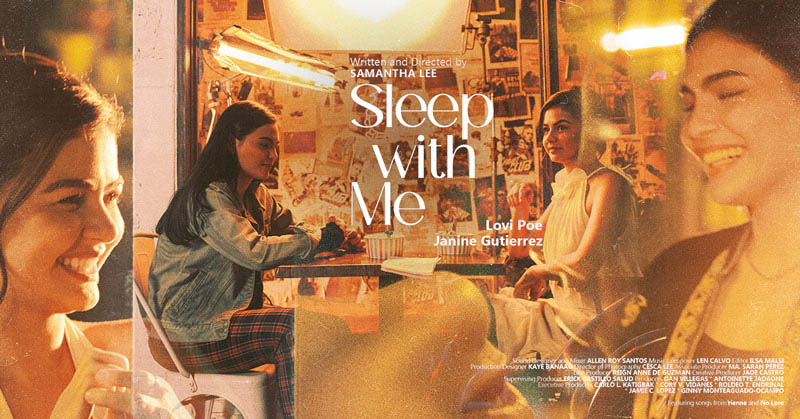 We spill our thoughts and feelings about “Sleep with Me”

Editor’s Note: A previous version of this story included a quote that may have been misleading or misrepresentative of the creator, cast and production team of “Sleep with Me.” We have since removed the quote to avoid further misunderstandings and kept this review purely from the writer’s perspective.

In Baka Bukas, one of the first scenes involves Jasmine Curtis’s Alex pitching a queer story in front of a couple of media company executives. They didn’t like it. So they shot it down, and gave weird-ass suggestions before telling her to rework the story for a straight main lead. Later on, director Sam Lee revealed in an interview with CNN Philippines that this scene, in particular, contains actual lines said to her. Uncomfortable and disheartening but, given the industry then, not entirely unexpected. And yet years later, here she is with Sleep with Me, starring Lovi Poe and Janine Gutierrez; a TV series written and directed by Sam Lee herself.

Co-produced by Dreamscape Entertainment and Project 8 Projects, Sleep with Me is one title many look forward to watching. Aside from highlighting a queer love story between two women, the show also explores the world from the perspective of persons with disabilities (PWDs). The girls’ love (GL) series follows Harry (Janine Gutierrez), a physically disabled late-night radio DJ and Luna (Lovi Poe), a girl who suffers from a rare sleeping disorder, as they navigate a world designed for the able and heterosexual. And while the title might suggest otherwise, most of the scenes between Harry and Luna remain wholesome and sweet—at least for the first half of the season.

Team Wonder got the chance to watch the first half of the series during its special screening. And with that alone, it’s highly understandable that it received the Audience Award for Best Episodic at Outfest Los Angeles LGBTQ+ Film Festival. This win crowns Lee as a two-time winner at Outfest, the first being the Emerging Talent Award for Baka Bukas.

But we all know what you’re here for, so here are our *actual* first impressions of Sleep With Me:

Of course, Sam Lee’s visuals never fall flat, with scenic shots, familiar locations and a lovely wardrobe (a thing I always seem to love pointing out). Yet, there remains a more important message behind its looks. In a world where women-led queer stories are written for the male gaze, Sleep with Me presents romance through the female gaze: cliché meet-cutes, cheesy scenes designed to douse the viewer with as much kilig as possible. Despite her cool, calm and masungit (bitchy) energy, Luna loses her marbles when pushed into a corner by Harry’s advances. On the other hand, Harry’s bravado is nothing short of admirable, even going as far as laughing when she leaves Luna in a fit of gay panic. (Now, in that sense, are you more of a Luna or a Harry?)

But the world isn’t as forgiving as it seems. Even with a flourishing romance, the two girls still exist in a world where they get othered and are reminded of that daily. Harry’s physical disability often makes her a recipient of microaggressions from people who call her an “inspiration” for existing. Not to mention the daily issues she encounters, especially when PWDs are rarely considered in the designs of public spaces. Meanwhile, the people around Luna perceive her as a wild party gal because she always seems to fall asleep when the sun begins to rise. But behind her cool exterior, Luna feels lonely and even misunderstood—she never wanted to stay awake that late anyway.

Sleep with Me aims to amplify the voices often left ignored by society: women, the LGTBQIA+ and PWDs. How does the world fail them in adjusting to the most basic of things, down to the preconceived notions we fail to unlearn? The way we view ourselves as saviors and advocates while simultaneously speaking for the community we proclaim allyship for. While the first half witnessed the two grappling with the every day, we hope to see more of them taking their power back and with more agency than regular heroines.

The conversation on representation is always a tricky one to navigate. Representation might be different for many—what’s accurate and respectful for one might not be the same for the other. So there is merit in the point that some members of the communities that Sleep With Me hopes to highlight might feel some discomfort and doubt about seeing two leads played by non-disabled, straight women. Especially when in 2022, the conversation of casting actual queer and PWDs continue to float. Despite all this, Sleep with Me is visibly written and made with diligent research, care and heart that you feel their intent seep through every scene and nuanced dialogue. So while I have my questions, we can’t deny the ripples the show has already made.

Nonetheless, I hope this doesn’t deter curious ones from giving this series a chance. Because while Sleep with Me shouldn’t be hailed the one-all-be-all for representation, it’s already a far step from the starting line of having more inclusive and diverse TV shows. In a world where women who love women (WLW) series can appear rare and short-lived (Netflix’s First Kill, anyone?), perhaps Sleep With Me could usher in a new change in Philippine TV. We hope to see more stories about PWDs and queer people in the spotlight—and a seat at the table of mainstream media.

“Sleep with Me” drops on iWantTFC on August 15.