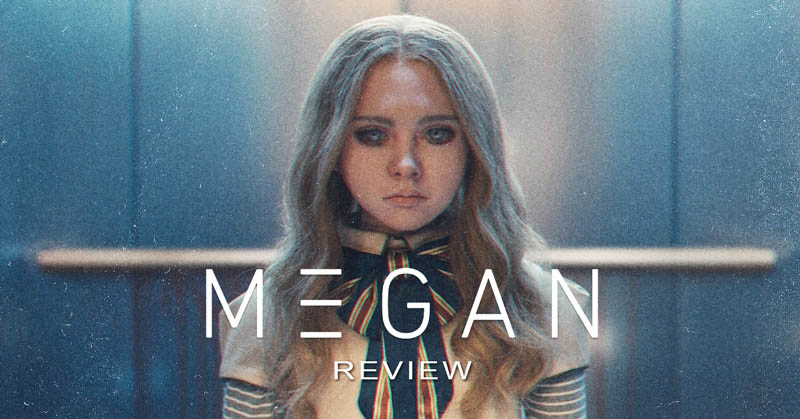 Fresh off the heels of 2022’s The Black Phone comes M3GAN, a sci-fi horror film produced by Blumhouse Productions and James Wan (Saw, Insidious and The Conjuring franchises). On the director’s chair sits the award-winning Gerard Johnstone. This time, they veer away from the elements of the supernatural and dive deep into the horror of technology. Get Out’s breakout star Allison Williams stars as Gemma, the roboticist responsible for M3GAN and immediate guardian to Cady (Violet McGraw from The Haunting of Hill House).

As far as plots go, the film follows M3GAN (short for Model 3 Generative Android), an Artificial Intelligence (AI)-powered robot that looks like a little girl. Gemma initially designed the toy to protect its user at all costs, whether physically or emotionally. But it ends up wreaking violent havoc on their lives. M3GAN fights bullies and plots revenge against neighbors. When her prime creator tries to lay boundaries down as she finds herself highly attached to Cady, and the helpful gadget transforms into a demented, blood-thirsty robot. Think Annabelle, Siri and The Terminator all programmed into one human-looking robot.

The model paired with Cady is a rushed and only a prototype, prematurely tested on Cady due to Gemma’s inability to connect with her orphaned niece. The roboticist also pitches it to the company as a last-ditch effort instead of a dead-end project. Its brilliance leads David to push for its launch as soon as possible. So M3GAN lacks finer details and codes that lay down the boundaries and safeguards, especially in letting technology have all information at reach. Each red flag is glaring, but these are also regularly pushed back in the name of deadlines and profit. Had Gemma not fed into the rush, she might not have had a blood-thirsty, overprotective robot on her heels. Instead, her reliance on AI and substituting her connection with her niece, Cady becomes obsessively attached to M3GAN as she enjoys her company more than any other human’s.

But one of the striking characteristics of the film is its campiness. The movie opens with a true-to-life for FUNKI’s PurRpetual Petz, a Furby-inspired doll that uses AI to generate genuine, real-time reactions. David claims that FUNKI has finally beat Hasbro with the doll’s release with a $10,000 price point. M3GAN, on the other hand, has the behavior of a glitchy adult human in a tin body looking like a little girl. She fiercely takes off her sunglasses, busts out in weird dance moves and breaks into autotuned song. So it borderline gets insane in some parts that it naturally extends to the promo. Talk about crowds of IRL M3GANs sightseeing and a Twitter feud with the OG freaky doll: Chucky. (Sorry, Annabelle, you don’t count!)

RELATED: 5 Killer Doll Movies to Watch if You Love Horror

You see, hyperrealistic and life-sized dolls are already creepy in themselves. Add the absurdity of an artificial creation questioning its existence, lacking humanity and with no understanding of boundaries—it becomes a recipe for disaster. M3GAN may be an all-in-one toy, but she followed her primary duty: to take care of and protect Cady by any means necessary. And she will do this ‘til death, shut down or full malfunction tears her apart.

For all its craziness, such as a titanium-made robot singing Sia’s popular track of the same name, M3GAN hits the nail on the head for social commentary. Blumhouse, Wan and Johnstone work in great synergy to bring the perfect blend of downright horrific and bonkers-level insanity that you want to see through. As the world constantly seeks technological advancement, sometimes driven by curiosity, profit, a personal vendetta or whatever reason, we tend to miss tackling nuances. The film might have no big twists and major surprises, but it doesn’t remove the horrifying fact: playing with technology with no bounds might stab us in the back before we know it.

Full disclosure: M3GAN is both scaredy-cat-friendly and worthy watch material. Do yourself a favor and learn (or laugh—your choice) from this cautionary tale. Once you’re done, you’ll know the answer to this final question: Will M3GAN beat Chucky in a fight?