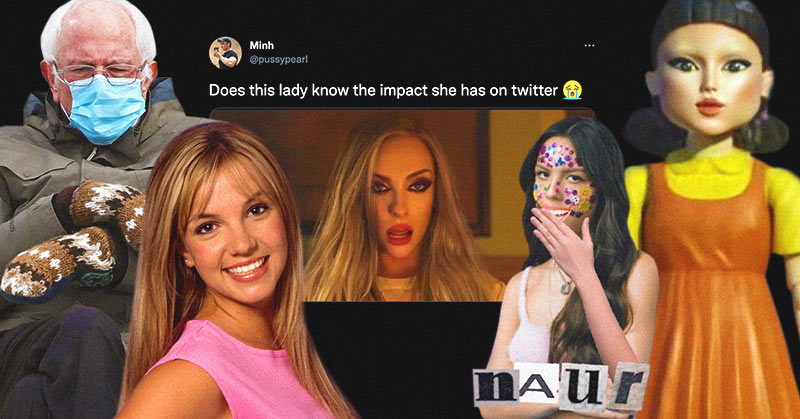 2021: A Year In Memes and Pop Culture Moments

We all laughed the year off with memes, didn’t we?

In Death To 2021, Lawrence Fishburne describes the past year as “a year that made 2020 feel like a mere prequel.” Safe to say, he was right. We opened the past year watching Republicans riot at The United States Capitol, witnessed multiple Covid-19 variants spread worldwide and pretty much ended 2021 with an unexpected plot twist. There were triumphs, issues and difficult conversations. As my friend said, “2021 was already sad, so give me something to laugh about.” We list down the defining memes, celebrations, and pop culture moments of 2021.

And laugh away the sorrows we did (and continue to do) thanks to memes, iconic milestones, and other happy moments. We needed material to stay entertained, distract ourselves from stress or make light of an already heavy situation. At least the internet, with its humor, provided and kept us sane.

Bernie Sanders and His Mittens

At the Biden-Harris Inauguration

A post shared by The People for Bernie Sanders (@peopleforbernie)

As the United States watched the inauguration of Joe Biden and Kamala Harris as the country’s President and Vice President, the senator and former Democratic Party front runner Bernie Sanders became an unexpected star of the show. The camera panned onto a socially distant Sanders trying to keep himself warm with his attention-grabbing mittens. His funny and unmoving position led him to become one of 2021’s viral memes, with different users on the internet editing him into other movie scenes and photos.

Youngest one to get the honor, too

Around February of 2021, Conde Nast appointed 27-year old Margaret Zhang as the Editor-In-Chief of Vogue China, dubbing her the youngest in its roster. The multihyphenate creative began her career in 2009 by launching a fashion blog at the tender age of 16 years old. Zhang’s resume now runs long, covering titles from film director, stylist and photographer to writer and the occasional model. From appearing on one-off features by British Vogue and other titles, she’s now running the show for Vogue China—a full-circle moment.

The 13-year-old conservatorship comes to a close

Around June 2021, Britney Spears spoke up against her conservatorship in an open court hearing for the first time. The graphic retelling of the experiences she went through reinvigorated the #FreeBritney movement as fans and supporters rallied behind her for her freedom. Spears experienced win after win as the case moved fast as she hired her own lawyer. Next, her father agreed to step down from the conservatorship and in November, the court terminated the arrangement altogether.

RELATED: “Hide The Pain Harold” Is Back On Twitter

Gen Z doesn’t believe in the power of the Sophie Amoruso-led #Girlboss movement. Refinery29 defines this phrase as “a counter-meme against the overwhelming pressure to forge ahead, to progress at all costs, to be a cog in a wheel that refuses to stop spinning.” As we struggled with work-life balance this year, there’s nothing like hyperbolic humor to get us through. Go big or go home, right?

But the phrase also encapsulates the absurdity of internet discourse and humor, where different buzzwords get overused. Stringing them together, you get an alliteration that describes you as one of two things: the worst human possible or an iconic Rosamund Pike antihero (think Amy Dunne in Gone Girl or Marla Grayson in I Care A Lot).

There seemed to be a sudden interest in how Australians spoke to the point that non-Australians worldwide attempted to articulate “no” in their accent. Hence, the birth of “naur.” Tracing its origins would be difficult as many Australian celebrities’ accents were subject to jokes. But BuzzFeed editor Estelle Tang also chalks its popularity to K-pop, specifically the fascination with BLACKPINK Rosé’s and Stray Kids Bang Chan’s accents. So what started as fandom inside jokes permeated the entire Twitterverse and cemented “naur” as a meme.

SZA Releasing I Hate U

After it blew up on TikTok

In the past years, blowing up on TikTok seemed like the go-to peak of any musician, such as BENEE’s Lonely and Charli XCX’s Unlock It. But in the case of SZA, the spliced soundbite of her Soundcloud-released song I Hate U went viral on the app. Once lip-synching “And if you’re wondering if I hate you, I do” became a trend, a lot of her fans and listeners begged the singer to put it on major streaming platforms. “Ask, and you shall receive,” wrote SZA on the announcement of the song’s official drop after much egging from fans.

TikTok Sounds Giving The Soundtracks of our Lives

The Backyardigans, Waking Up In The Morning, and more

TikTok’s power as the go-to social media platform in quarantine did not wane in 2021. If anything, this place became the new spot where memes populate. We can thank the endless library of sounds that became the soundtracks of our lives. The top sounds for 2021 involve tunes from The Backyardigans and the Real Housewives of New Jersey. The latest ones would be the bass boosted remix of Saucy Santana’s Material Girl.

Instagram filters have changed how we do beauty, even as extreme as warping our beauty standards, as well as affecting our self-image and mental health. But Gen Z took the issue the best way they know how: making light of it with hyperbolic memes. Enter: Yassification. This meme involves the over-exaggeration of Facetune alterations onto a photo: clear skin, snatched makeup and thick lips to the point that the person is unrecognizable. While this meme has been around LGBTQIA+ spaces since 2020, the Yassified video of Toni Collette in Hereditary sparked its entrance into mainstream.

Now, Yassification just means altering something to the point that it’s unrecognizable. You know, slapping a filter on a photo to make the image seem better than it actually is. Pretending that everything’s sound and well when it isn’t. Isn’t that the perfect way to describe 2021?

If you somehow know everything that went down this year in memes and pop culture moments, I recommend touching some grass. I know I need to.