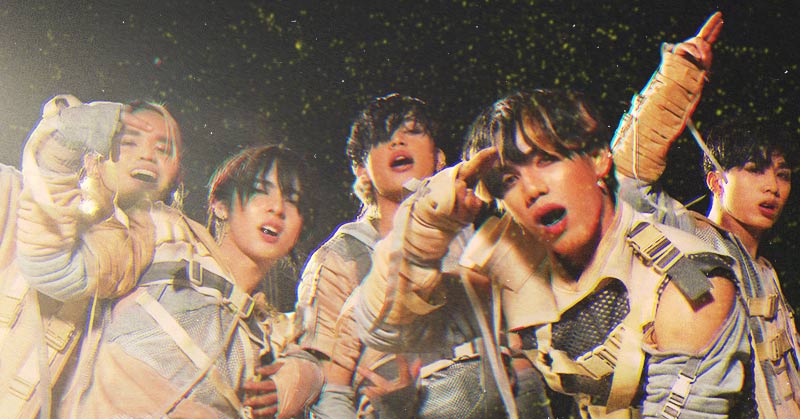 When Spotify’s executives told the press that SB19 would be featured in a video campaign for the streaming platform, it felt like a full circle moment. Beyond the fact that Spotify, as the top music streaming platform in the Philippines, directly contributed to SB19’s explosive rise to fame, the video itself felt fitting.

The minute-long video features Josh, Pablo, Stell, Ken and Justin tuning and decorating jeepneys with local artists. The members take turns narrating the stories behind the six songs on their newest EP, Pagsibol, which translates into germination or growth.

From the album and its tracks, the casual Filipino narrations and jeepney representation, the video threads together the fibers of SB19’s being. It’s well-produced and commands your attention, but it’s humble and true to their roots.

Having freshly unlocked a new set of achievements—charting on the Billboard Social 50 top ten, getting a monumental BBMA nomination, setting the wheels in motion for their long-awaited virtual concert—it seems there’s no better time to revisit their beginnings. And with Pagsibol, the five-piece group does just that.

RELATED: Look Back, March Forward: SB19 Powers Through a New Era with MAPA

The new SB19 comeback EP is made up of six tracks. From the tracklist, three had been released over the course of the pandemic, while three were fresh drops.

What?, one of the older tracks on the EP, was released by SB19 to headline a shift in direction earlier this year. While most of their fan base had been reeled in with the bubbly synth of Go Up and Alab (Burning), they bravely turned on their heels and trudged in the opposite direction. Make no mistake, it’s the same SB19 fans know and love—just bolder, braver and truer now.

This fearlessness forges a clear path to Bazinga and Mana, two of the new tracks on Pagsibol.

Upon first listen, Mana bears a sonic resemblance to What?—something about the staccato choruses paired with grandiose instrumentals feels so familiar that one might wonder if they were intentionally composed to be that way. When asked, members Justin and Pablo explain that while What? and Mana may share certain similarities, it isn’t just these two that share a connection. All the tracks on Pagsibol are interconnected, forming smaller parts of a greater narrative.

Like Love Goes from their Get In The Zone EP, Bazinga seems to be their current crack shot at reaching an even wider international audience. The trap-pop track is written almost completely in English, with the occasional line or two in Filipino. There’s a little Japanese in the mix too, just for kicks. It’s dynamic and unflinching in the statement it makes, a battle cry to the haters whom they’d previously addressed in Wonder’s February 2020 cover:

Bazinga is also the gutsiest display of the group’s rap skills thus far. Josh delivers a solid verse to set the tone in the first minute of the track. While Pablo and Ken’s back-to-back verses pack a heavier punch, Josh’s delivery—clear and well-enunciated as always—works in his favor. It wouldn’t be an SB19 without ambitious vocals, and Stell and Justin deliver flawlessly on that front.

MAPA and Ikako come in to balance out these hard-hitters. Ikako is one of the group’s earlier pandemic releases, a tribute to the frontliners who continue to fight the brave fight. Meanwhile, MAPA is a love letter to their parents, which we discuss further here. In true SB19 fashion, Pagsibol takes listeners for a ride, shifting from strong bangers to tender ballads at the drop of a hat. I find that the tracklist could be shuffled around for better flow, but that’s my personal take. Their goal of showcasing their diverse capabilities is accomplished either way.

SLMT rounds out the EP, closing things off on a light note. Despite this track being the closer, Pablo pinpointed this track as the one he wanted their fans to hear first. The reason is clear: it’s a classic “thank you” anthem between fan and artist. Catchy and spirited, the song could pass as a soda ad jingle—it’s got that same feel-good air to it. You know what I mean; it makes you think of good days and demands a smile to form on your face.

RELATED: SB19 and Samsung Unleash Awesome With the New Galaxy A Series

In an exclusive roundtable with the media, Pablo explains that Pagsibol may feel different to their previous EP. The biggest reason behind the shift: the increase in control that the members now enjoy. Unlike Get In The Zone, the team worked on Pagsibol’s production, lyrics and music videos through and through. Before this, songs were primarily assigned to the group. This time, the group wrote the tracks from scratch, getting to call “90 to 100%” of the shots. And I don’t mean to state the obvious, but it looks like this creative freedom is paying off.

With preparations for the virtual concert in full swing, things are looking even more promising for OPM’s latest poster boys. As they continue to sprint full speed ahead, we’ll be watching, cheering and streaming from the sidelines.