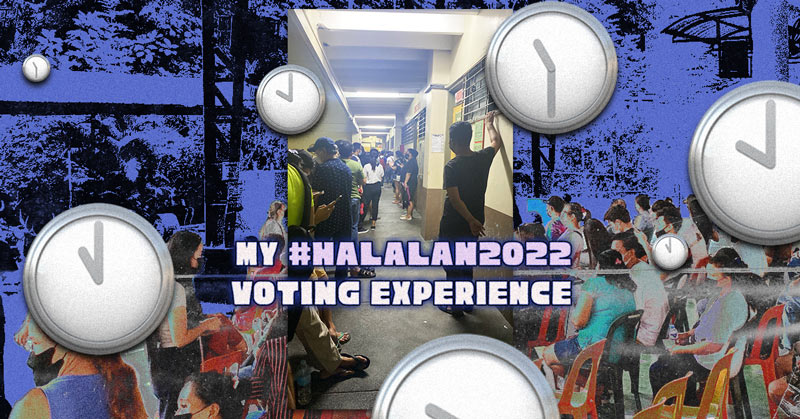 With the elections having just concluded on the evening of May 9, we are still collectively reeling from the partial and unofficial results—those numbers that flash on every news channel, and change, just incrementally, every time we see them.

But before those numbers and before these feelings—whether of grief or satisfaction—we did our part by lining up and exercising our right to vote. We all had different experiences, but this one is mine:

I woke up the day after an eight-hour flight, and wondered if I should make my way to my precinct early. After all, the day had finally come: it was voting day for #Halalan2022 But no one else in the house seemed ready to go, so I told myself it would happen after lunch, and let myself sleep in a little more.

After checking my precinct for the fifth time, I realized my brothers weren’t eligible to vote anymore. In my family, I was the only one voting. And it made me wonder how many voters with good intentions lost their chance to vote because of circumstance. It’s particularly strange for my brothers, because the only reason they missed the last two elections was work: one is a healthcare worker and the other volunteered legal services for the elections.

By lunch, I wanted to make my way to the precinct; my neighbors told me not to bother yet. The machine was broken; I would be in line just waiting. So I left at 3:30PM, as advised, instead.

RELATED: How To Deal with Election Anxiety—Yes, It’s A Thing

By 3:45PM, I was at my designated location with no clue where to lineup. I asked the people already in line, and went around in circles until I finally found someone that told me: “Ate, wala ba tumulong sa ‘yo sa baba? Sasabihan ka nila kung anong classroom dapat. (Didn’t anyone help you downstairs? They’ll tell you what classroom to go to.)”

So I went to a sir, asked him where I should go, and went to my proper line. Thirty minutes in, the line hadn’t moved in inch. A girl announced to us that the machine was still broken, and it would take an hour to replace. By that point, the poll watchers and election volunteers were telling us we had a choice: wait in line for a working machine or opt to hand in our ballots so that they could plug them into the machines later (not to mention missing out on checking our receipts).

In the next three hours, I stayed in the same line while a 1) a technician tried to fix the broken machine, 2) a human took the broken machine but didn’t replace it and 3) my precinct finally got a replacement. It was close to 7PM.

As my line inched closer and closer to the classroom door, news outlets were already reporting partial counts for #Halalan2022. I questioned whether or not I should still bother, if I wasted my day, and whether my one tiny vote would make a mark in the million count-discrepancy I was seeing before me. But I stayed. I thought I deserved to stay, to vote, to shout into the void and be heard in one way or another.

RELATED: For Campaign Season and Beyond: How to Effectively Deal With Online Trolls

There is nothing much to say, because I am still living in the after. We all will be until the next president of the Philippines is sworn in—if then. I am hearing less noise now, but there is still noise. So many people are refusing to close the chapter of #Halalan2022. Is it over? I can’t tell.