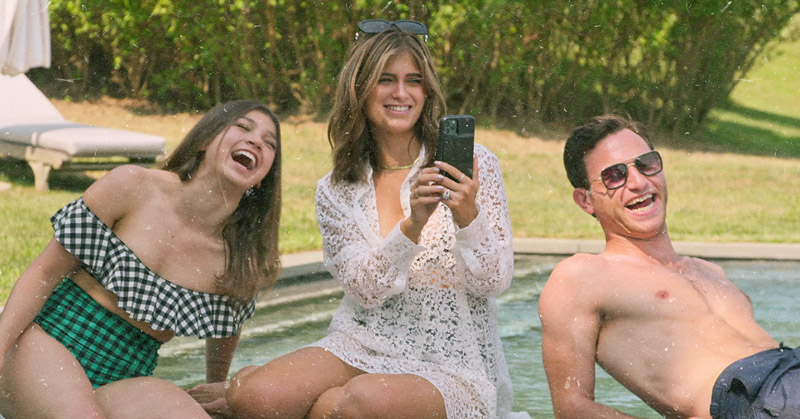 At some point in life, one is confronted with the conscious choice to question and either choose or abandon religion. This, after all, is a consequence of free will. For Elite World Group’s CEO Julia Haart, she left her ultra-Orthodox Jewish community at the age of 43, with four children to boot, and pursued “worldly” success, rebelling against the truly outdated idea that women are only meant to be homemakers.

Netflix’s reality TV series My Unorthodox Life revolves around Haart’s life as a fashion designer-turned-business mogul of a global talent empire and mother to social media maven Batsheva, app whiz Miriam, lawyer-in-the-making Shlomo and high schooler Aron. As a family, they confront the realities of growing up in an ultra conservative environment and choose to carve out their own paths in Manhattan—with or without religion. The matriarch sets to revolutionize the media industry from the inside out and empower women with her well, unorthodox, story.

In an emotional exchange with her youngest, Julia shares, “I lived in that [fundamentalist] world, and it’s a very small and sad world, and [is] a place where women have one purpose in life and that is to have babies and get married.”

The binge-worthy nine-episode unscripted series displays her pursuit of freedom even if this simply means wearing high heels or showing off a sex toy after years of being repressed. She hopes the show reaches women who are in similar situations but can’t leave because they aren’t equipped to do so (for many, secular college isn’t an option). Still, many feel deceived by her portrayal of the Jewish faith on the show.

In an interview with Entertainment Weekly, she shares, “I had to change my phone number since the show has come out. I’ve had death threats. It wasn’t an easy choice to make, but I chose to do it because—whether it’s that you live in a restrictive or repressive society or environment, or you’re just in a bad marriage, or you would’ve been told your whole life that you are less than—I felt that it was a story that hopefully can provide other women with inspiration and hope. And I felt that it was something I have to do.”

She adds, “It’s never pleasant—but if you attack fundamentalism, fundamentalism is going to attack. The reality is that I need to keep speaking with love and kindness and make sure that no voice can silence progress…and we will keep on demanding change until the day change is made.”

Although My Unorthodox Life is a glaring tale of female empowerment, it is also a story of candid courage to pursue radical religion—beyond the constraints of what is considered traditional—most evident in Julia’s adult children. It’s the ability to educate one’s self continuously on their chosen religion, and not simply following it blindly because it’s what’s familiar or comfortable. It’s questioning aspects of one’s faith, but also acknowledging that we are finite and limited, and simply can’t know the answers to everything.

A post shared by My Unorthodox Life- Batsheva (@batshevahaart)

In one scene, Shlomo declines an invite from Miriam for dinner with the family, to do his weekly Shabbos or Sabbath, a day of religious abstinence from a number of activities recognized by Jewish law, which begins before sunset on Friday afternoon and ends at nightfall on Saturday. He shares, “I think Miriam wants me to break Shabbos because she looks at religion as it’s outdated. She doesn’t like anything that holds you back. For me, I love the idea of, you know, taking a day off the week to really just focus on what’s important in life.”

He adds, “It’s a good feeling you get sometimes when you just pray and sing the words, just lose myself in the moment with some prayer. Even if I feel like I decide to not be religious, I don’t think I’ll ever fully give Shabbos up. I still would want to, you know, celebrate our tradition.”

In another scene with Miriam, Shlomo and Aron, things get slowly heated as they discuss the benefits and drawbacks of a Jewish upbringing. Shlomo talks to Aron, the youngest who still lives in their ultra-Orthodox community, and says, “I think the point of what ima (mom) was trying to do is not try to get you away from, like, shomer mitzvos (observance of the commandments). I think she’s trying to show you that there’s a middle path. You don’t have to be extreme on one side or the other.” Miriam adds, “We want to show you different ways so you can make that decision for yourself.”

RELATED: Emmy-Nominated Shows To Catch Up To

My Unorthodox Life is an undeniably refreshing type of reality TV for religious and non-religious viewers alike. It’s a story of one woman’s courage to question everything she’s known her whole life, abandon it, and embrace her truth and her family’s unconditional love.

Stream My Unorthodox Life only on Netflix.