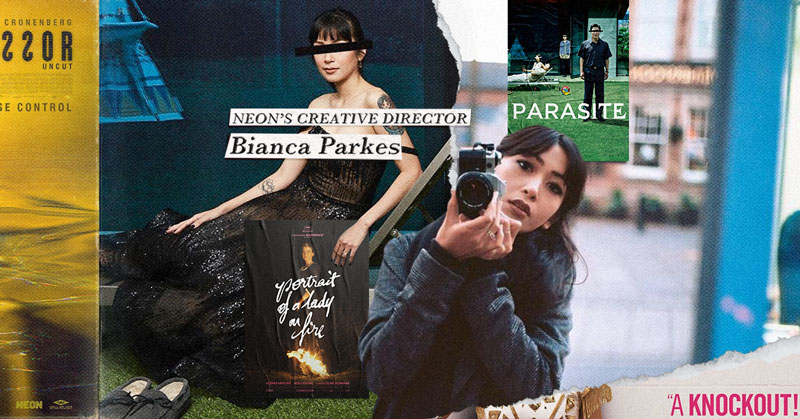 Bianca Parkes of Neon gives us her thoughts

The Academy Awards, the year’s biggest night in movies, is less than a month away and we are excited. Below, is our conversation with Bianca Parkes, the Filipina-born, Barcelona-educated and now LA-based creative director of Neon. So, naturally, we talked to Bianca about her thoughts on the state of the film industry and this year’s Oscars.

Wonder: What do you do at Neon?

Bianca: I work as the Creative Director/Head of Design.

W: How would you describe your overall aesthetic? How is it distinct to you? Talk us through your creative process.

B: I like to keep things minimal when it makes sense, although it really depends on the projects and the source material. The initial creative exploration is my favorite part of the process. I love immersing myself in different worlds and building on that.

W: How has working at Neon changed your opinion of the movie industry? And movies themselves?

B: Without a doubt [it has changed my opinion, but] more than that, 2020 only accelerated the changing film industry. I love that films have become more accessible through streaming service and what have you, but it’s definitely made it harder for theatrical releases. Long live cinema!

W: What are some of your favorite movies of all time? What criteria do you look for in a good movie?

B: Some very obvious but very influential choices here. 2001: A Space Odyssey is at the very top. I watch it at least once a year, and I come out of the trip with something new every time. I watched Citizen Kane when I was in school, and to this day, I still dream of Rosebud. Mel Stuart’s Willy Wonka and the Chocolate Factory and GDT’s Pan’s Labyrinth are childhood favorites.

W: When Neon picked up Parasite, did you have a feeling it would achieve the success it later did? Did you feel it was special? Why or why not?

B: Other than the Bong Joon Ho of it all, I went in cold not knowing anything about Parasite and immediately recognized how important it was. It’s not just good for diversity, it is a brilliant social satire about class and all around a great film. It deserved all the success it got and goes to show that the rest of the world (outside the US) has so much to offer.

W: Attending the Oscars Parasite after party in 2020 must have been very memorable. Can you talk us through that day? And through the build-up of Parasite from nominations to the awards in general?

B: I had faith in the film and Bong [Joon Ho] from the very beginning. The whole day felt surreal. The crowd erupted when Bong won Best Director and then again when the film won Best Picture. I may have shed a tear or two. I worked on it throughout [my] pregnancy and through the lens of an Asian woman living in the US. To say it was special is an understatement.

W: What words of advice do you have for other creatives in the industry that want to “make it” in a big city like LA, New York or London?

B: Three words: go for it. Have a clear goal in mind and take steps towards it every day. Corny, but there’s really no replacement for hard work and persistence.

B: There are way too many to mention, but here are handful that come to mind: The Power of the Dog, Ascension, Licorice Pizza, Titane, Flee, The Green Knight, The Worst Person in the World, Dune, Quo Vadis, Aida? and Inside. Plus a few TV mentions: Succession, How To with John Wilson and Get Back.

W: What can people look forward to from Neon this year? In terms of upcoming projects, new talents.

W: What are your favorite Neon releases?

B: Parasite. Portrait of a Lady on Fire. Flee. Border. Gunda. I, Tonya. Night of the Kings. Possessor.

We don’t know how this year’s Oscar season will conclude, but we do know this: The art of film, thankfully, is far from dead.

Neon is an independent movie production and distribution company that has released such critically acclaimed films like Parasite and I, Tonya.