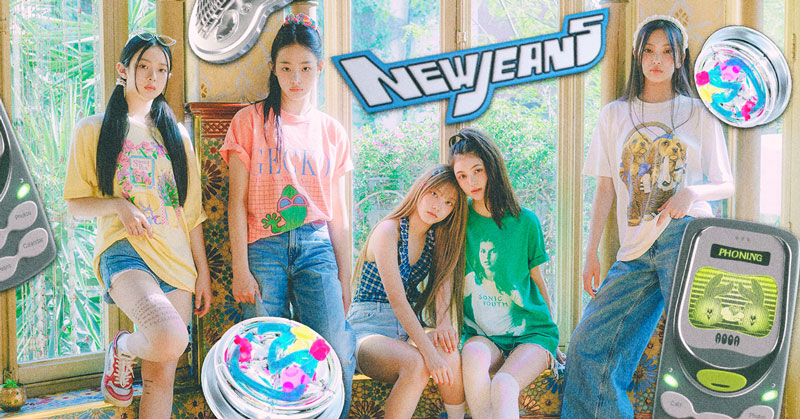 Why NewJeans Definitely Has Our Attention

Attention is what they want—and they got it!

In a previous article, I proudly proclaimed 2022 as the “Year of the Girl Group” because many of this year’s hits came from women-led acts. From Nayeon’s bubbling POP! to Red Velvet’s Feel My Rhythm to IVE’s LOVE DIVE, I know for a fact that the ladies of K-pop will keep giving. Safe to say that this claim continues to hold true, especially with the entrance of NewJeans into the scene. The quintet made up of Minji, Danielle, Haerin, Hanni and Hyein, hail from HYBE’s independent label, ADOR (All Doors One Room), headed by CEO and head producer Min Hee-jin.

RELATED: Five Young Filipino Talents To Watch Out For

HYBE and ADOR introduced NewJeans through a surprise drop of their first B-side, Attention—with no teaser photos or reels. The refreshing music video featuring an easy R&B slow jam was enough to entrance everyone. As the song ended with a cheeky chant of “A-T-T-E-N-T-I-On / Attention is what I want,” the girls of NewJeans successfully made an effective buzz. ADOR released two more B-sides in the following days, with four versions of Hype Boy and the dreamy Hurt.

While I’m not one to call myself a K-pop expert, the rollout for NewJeans follows a unique new pattern. NewJeans continues to make ripples in the K-pop scene with the element of surprise and abundant content, such as consistent posts and even a dedicated social media app for their debut. Did we mention that one of their album versions comes in a circular bag? These are just the tip of the huge iceberg. Here’s why NewJeans definitely have our attention.

So far, their music videos to Attention and Hype Boy seem to capture the freshness of youth through individual storylines. They dream of meeting someone in a concert, pining over someone from afar, looping in friends about one’s first love woes and discovering that the chase is as thrilling as the actual thing. Meanwhile, in Hurt, the girls sing about protecting themselves from love’s cruel games while leaning against each other in a field. With close-up shots of their faces, it’s easy to realize that these girls are still so, so young. The all-teenager lineup exudes a youthful charm with their fresh faces and sweet grins—a breath of fresh air just in time for South Korea’s summer.

Of course, another thing one notices about a K-pop group is their concept’s cohesiveness and quality. But based on what NewJeans has put out so far, they’re doubling down on everything hot about Y2K and the early 2000s. Low-slung jeans, mini-skirts, baby tees, oversized sports jerseys and colorful prints—their stylists know how to dopamine dress for the summer. The rest of their visuals don’t fall far behind, too. Mixing Gen Z’s knack for anything analog, like film cameras and wired earphones, cute icons and kitschy accessories with a touch of futurism, and you get NewJeans.

But what makes people stick with NewJeans could easily be their music. R&B-laced pop tracks seemingly plucked out of the early 2000s, each song with its own distinct flavor. The girls’ smooth vocals sound full with each line and verse sung. Not to mention a lack of a forced rap break in between. This direction in music is intentional, showcasing the girls’ innate talents without pushing them too hard. In an Instagram post, NewJeans writes, “The EP presents a sophisticated brand of pop—easy listening anywhere, anytime—and has been produced in a way that focuses on the members’ natural voices without overengineering their sound.”

It just feels like a crime that the album drops on streaming services on August 1, 2022.

RELATED: Going Global: Why Some Fans Go Abroad To See Their Favorite Artists In Concert

As early as now, it’s evident that HYBE and ADOR hope to make the year’s biggest debut with NewJeans. But we can also say that they’ve successfully captured listeners, not only those from the same age group but a couple of teens at heart that still hope to enjoy a fresh summer.

The curious ones can anticipate the release of their title song, Cookie, and their official debut with a live performance on a coveted music show. Get to know the girls of NewJeans better with this video.