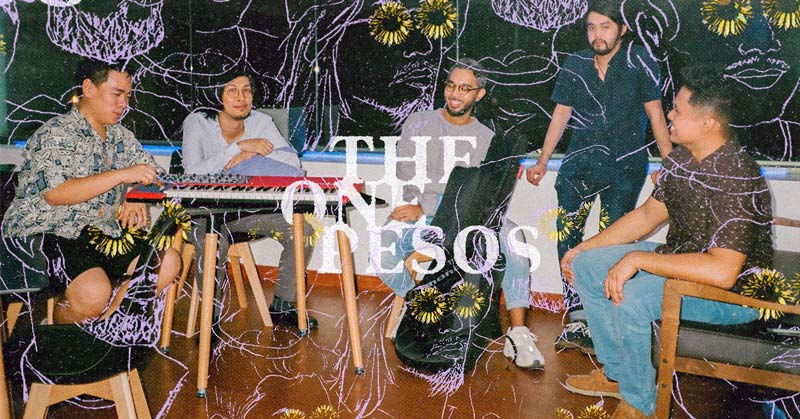 The One Pesos Reminds Us To Breathe with “Di Matapos-tapos”

OPM band The One Pesos talks routines, changes and their newest single

After two years (and counting) of living in a pandemic, the world now expects that we’ve gotten the hang of living with the virus. With over 70% of our routines involving working from home, we still find ourselves working on overdrive. We rush through workdays and weekends like clockwork. Staving off cabin fever has us taking on one thing after another. However, despite speeding through multiple tasks simultaneously, languishing continues to hang in the air. We ask, “When will it end?” and “Can we take a break?” In their latest single, Di Matapos-tapos, The One Pesos OPM band perfectly verbalizes these feelings as they remind us to take a breather and lay down our load.

RELATED: No Rome Talks About New Album “It’s All Smiles”

It’s been two years since all of The One Pesos OPM members were in one room, but they managed to pull through and continue writing. They used music as an outlet and extended their stories for others to hear—and maybe even reached those who feel the same way. Despite the world closing its doors and life seemingly zooming by, they recalibrated their creative processes and took it day by day. They’ve shared their thoughts on needing to slow our paces down, too, while doing some mindful yoga. As a result, their quarantine album (aptly named Di Matapos-tapos) made “during, because of and in spite of COVID-19” came to fruition.

We caught up with The One Pesos’ OPM band members Enzo Zulueta, Jason Romaboa, Andrew Florentino, AA Enriquez and Migi de Belen. And they talked about routines, changes, and the choices behind the OPM band song Di Matapos-tapos.

Wonder: Hi, guys! How has quarantine been treating you guys? Any new hobbies or changes in your routines?

Enzo Zulueta: Nagpakasal, nasira ang diet at naubusan ng papanoorin sa Netflix at YouTube. (I got married, got my diet interrupted, and ran out of things to watch on Netflix and YouTube.)

Jason Rombaoa: Two years na, nakalimutan ko na ‘ata ang buhay pre-pandemic. (It’s been two years, I think I’ve forgotten what life was like before the pandemic). Work from home, no gym, no jam. But I got a chance to reconnect with old hobbies and practice drumming.

W: Di Matapos-tapos talks about taking a breather in such a fast-paced world. So what made you guys want to explore this topic for the song and use it as the album’s title?

AE: While working from home, the idea is you have the most time to do things. But also it’s the most pressure to do something with our lives. You see so many people building businesses and gaining from investments on social media. You don’t have to pressure yourself to always make something creative or successful, don’t feel like it’s a waste of time! Sometimes you just need to lay in bed the whole day.

MDB: I think we all have life projects that, as we get older, we feel the urgency to accomplish more and more. The pandemic amplified that anxiety. At the same time, I found it funny to make “‘Di Matapos-tapos” (Unfinished) the title of our band’s project. Joke’s on us, ang hirap talaga tapusin! (Joke’s on us, it’s really difficult to finish!)

W: From Slow Us Down to Di Matapos-tapos, your “post-pandemic” OPM band songs explore struggles we became familiar with because of what we’ve all experienced. They serve as reminders of what we’ve been through, specifically living through a global crisis. Do you think putting music out with these messages is essential? How come?

JR: Essential for the listener or for us? Bahala ka na kung tatamaan ka sa music namin, kung mamo-move ka (If you get moved by our music, that’s up to you). For me, doing what makes you happy is essential.

AE: People are going through tragedies, losing their jobs…I don’t think it’s necessarily essential to put out a message people already know. But it’s good for us as a band to tell our story and put it down on record at this moment, so we can look back in time and realize, “Oo nga ito nga nangyari, this is what we went through (Yeah, this happened, this is what we went through).” Essential or not, this is a good and healthy practice.

MDB: For me, the act of putting out music is part of the process of perpetually asking yourself what you value in life, what’s important, what matters? And that’s healthy!

RELATED: Music As An Escape: A Conversation with Indie Pop Duo reon

W: On the technical side, you mentioned that the pandemic pushed the OPM band to strip down your recording process to the essentials. Can you walk us through your band’s creative process and how you came to that decision?

W: Given that you guys recorded Di Matapos-tapos separately, how has it affected your songwriting processes? Did you learn new things or find other ways to get inventive with your sound?

JR: Nung live kami magsulat at mag-areglo, mas funky. Ngayon mas simple ang song structures, less syncopation at more downbeat lang. Less technical siya, mas streamlined kasi bagong process. On my side, Garageband lang ako sa iPad. Kailangan kong pilitin ‘yung sarili ko na ‘wag masiyadong maging flashy. Simplehan lang talaga pero rock. Personal challenge wala akong recording gear, pero nahasa naman programming skills ko. Mas naging in-touch ako sa producer side ko kaysa sa performer side. (When we would write and arrange live, it was funkier. Now, the song structures are simpler, less syncopation and more on downbeat. It’s less technical and more streamlined because of the new process. On my side, I just use Garageband on my iPad. I have to for myself not to make it too flashy. Make it simple but rock. It’s a personal challenge that I don’t have recording gear, but it trained my programming skills. I became more in-touch with my producer side instead of my performer side.)

W: What’s the most challenging part of putting an album together separately?

MDB: Dati (Before), the period between the initial demo and the finalized arrangement or pre-production was when we’d get to jam out and test different ideas live in real-time. The way we do things now feels much more linear, and I guess it’s good to have a strong sense of structure, but it’s been two years since we last jammed or even met up.

W: Dialing back to the song of the OPM band, what do you want people to pick up from Di Matapos-tapos?

MDB: Ako kasi (For me), I write songs because I can’t help it. It’s essential to me, and if by continuing to release music other people feel motivated to continue doing what they, in turn, find essential, that’s the best response we could hope for.

AF: Our music is more of self-expression without expectation.

W: Lastly, what else can we expect from The OPM band, The One Pesos in the coming months?

MDB: Before the pandemic, we were already working on an album. So we’ve got about a dozen songs already written. [Yung] iba nga mixed and mastered na. Pero sa ngayon, malapit na naming ilabas ‘yung music video nitong Di Matapos-tapos, so expect that soon! (We’ve already mixed and mastered some tracks. But now, we’re about to release the music video for Di Matapos-tapos, so expect that soon!)

While we wait for the music video for Di Matapos-tapos to release, at least we can stream the single on Spotify.