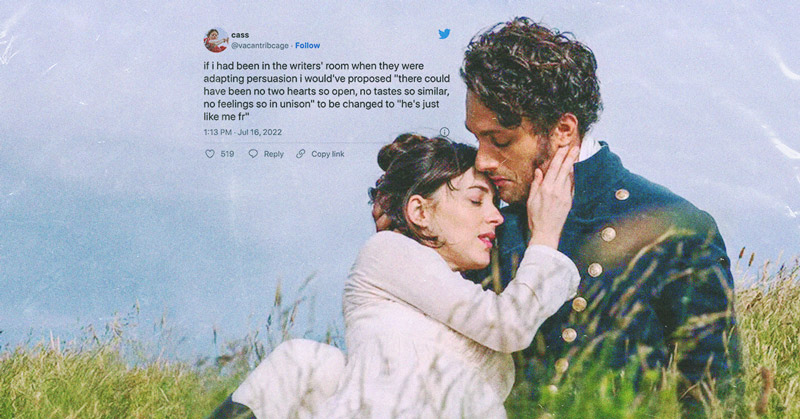 Persuasion? More Like Lack Thereof—There Are Lots to Dislike in Netflix’s Adaptation

But the Netflixification of Jane Austen does bring one good thing

The debate on book-to-film adaptations continues, but I always thought that this never left the realm of modern sci-fi novels or young adult books. So when it boils down to the classics, I’m somewhat clueless about the specific rules or expectations people have for the retelling of Jane Austen novels. Well, except for a couple: the inherent presence of tension and yearning. The slow burn of romance and the urge that will have you turning each page to get to the end. Striking and poetic dialogues that can embed themselves in our heads. So when news circulated about Netflix producing a live-action adaptation of Persuasion, fans were hopeful.

As far as summaries go, Persuasion follows Anne Elliot’s (Dakota Johnson) trials with romance and herself. As a teenager, Anne had a romance with sailor Frederick Wentworth (Cosmo Jarvis) but was persuaded to break up with him because their social standing did not align. Now, 27 and unmarried, Anne wallows in regret and self-pity for letting him go. But as fate would have it, she crosses paths with Wentworth, now an established captain, once more. Will fate work in their favor and place them get back together? The entire thrill of Persuasion builds off on this, as well as Anne’s honest commentary.

This is why when the 2022 Netflix adaptation of Jane Austen’s Persuasion, directed by ​​Carrie Cracknell, began picking up flak over praise, I rushed to watch the new film. After spending two hours watching the movie, I fully understand why it pushes all the wrong buttons.

Red wine-chugging, crying-in-the-bathtub and window-call-ditching bachelorette—nope, this isn’t Bridget Jones’ Diary; it’s a relatable Anne Elliot. Her character may be witty, clever and regretful, but not so much that she side-eyes every shenanigan and unfortunate incident ala-The Office. Instead, this Anne Elliot is slightly resentful and haughty, far from the level-headed and quiet novel character. In every other shot, Anne Elliot also addresses the viewer and seemingly makes eye contact with them whenever possible, breaking the fourth wall too many times. Understandably, Netflix wanted to replicate a narrator, but weaving it into too many scenes makes it awkward. So watching this film felt like a bad mash of Emma and Fleabag rather than a peek into Anne Elliot’s innermost thoughts and feelings.

RELATED: The Gray Man: Not Just Another Action Flick

The Dialogue and Lack of Tension

if i had been in the writers’ room when they were adapting persuasion i would’ve proposed “there could have been no two hearts so open, no tastes so similar, no feelings so in unison” to be changed to “he’s just like me fr”

When Anne Elliot describes herself as single and thriving against a montage that depicts the contrary, it becomes apparent that Persuasion tries to remain faithful to the Millennial-Gen Z humor of irony. But instead, it falls flat. Peppering modern terms such as “he’s a 10,” “exes,” or “self-care” into the script reduces its homage to Austenian poetry to a feeble attempt at making the source material palatable—a pitfall of many an adaptation, but something that sticks out in Netflix’s Persuasion retelling in particular.

Another charm of Jane Austen’s novels is the constant presence of tension and yearning between characters and love interests. They skirt around each other until it becomes unbearable. All these build up to an ending that is well-deserved and almost euphoric. Something that’s worth it. This dissipates when they try to fill in the longing stares across a crowded room with pockets of dialogue and chances to discuss the past. More opportunities presented to hash out their feelings lessens the impact of the ending.

RELATED: Family Flicks To Catch This August at the Cinemas

It seems that Netflix attempted to pull a Bridgerton with Persuasion: a modernized retelling of romance in the regency. Factually, they hit the nail on the head. An era where status determines the worth of a suitor, but marriage is inevitable regardless of feelings. Netflix never falls flat on budget and accuracy, so the visuals are always pleasing from beginning to end. So for those who still hope to give it a chance, press play without expectations. Enter the movie free from judgment, and you might learn to enjoy it.

But perhaps adapting Jane Austen is too might a task that even the media giant struggled with the execution. (The 2005 adaptation of Pride and Prejudice can’t relate, though.) How does one manage to translate her knack for such tensions and stories for the screen? Adapting her most mature heroine and arguably one of her best works is now a major undertaking, a task that could ultimately end as a hit or miss. Yet, in all of its faults, Netflix’s Persuasion brings one good thing to the table: a start for many others to try and breathe a new life into her work.