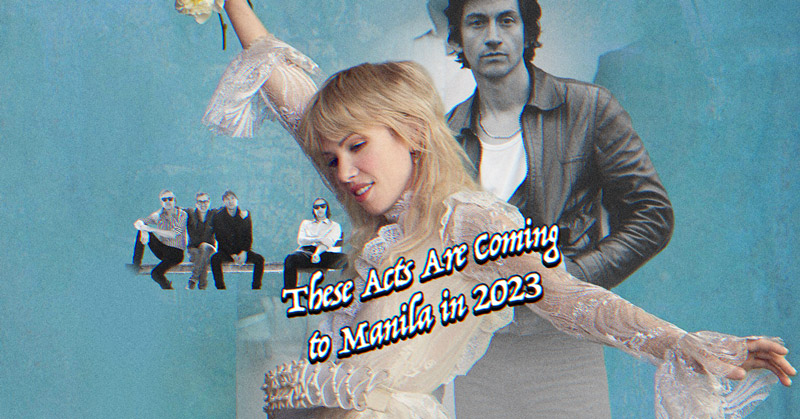 Phoenix, Carly Rae Jepsen and Arctic Monkeys—These Acts Are Coming to Manila in 2023

Get ready for Wanderland: The Comeback

Just when we thought we had a jam-packed 2022 with all the concerts, fan meetings and music festivals playing, 2023 comes in hot. But we all know that one of the biggest music fests we’re anticipating is Wanderland Music & Arts Festival. Produced by Karpos Multimedia and co-presented by GCash and Foodpanda, the long-standing weekend filled with music and art will make its grand comeback on March 4 and 5, 2023, at the Filinvest Event Grounds in Alabang. And, of course, they make a grand return with a heavy lineup of headliners: French band Phoenix and the one, the only, Carly Rae Jepsen. A day after, Arctic Monkeys is set to take over the same location in their Philippine debut.

Yep, you guessed it. Three days of major feels, throwbacks and comebacks, all for our listening and experiential pleasure.

Kicking off festival announcements with a home run, Wanderland surprised their long-time followers by announcing a diverse lineup of artists. They cap the Wave One announcement off with Phoenix: the French band of Thomas Mars, Deck D’Arcy, Christian Mazzalai and Laurent Brancowitz. So relive your favorite moments and move to their hits Lisztomania, 1901 and Tonight at Wanderland: The Comeback. Phoenix will join other acts such as No Rome, Men I Trust, Balming Tiger, our very own BLASTER, August Wahh and more.

We all had a hunch—especially when Wanderland teased their newsletter sale for festival passes with lyrics to I Really Like You. Everyone waited for this with bated breath and, as another early Christmas present, the festival confirmed her attendance. Whether we’re still stuck on E·MO·TION, falling in love all over again with Dedicated (sides A and B) or basking in The Loneliest Time, this opportunity is too rare to miss. She came back for us, baby. She came back for us! Carly Rae Jepsen’s confirmation might kickstart a couple more acts we’ll see on the Wanderland lineup.

Cop your Wanderland: The Comeback passes through the official website. In addition, 15% off discounts from GCash and Foodpanda await until January 12, 2023, or until supplies last!

The announcement of Arctic Monkeys came ahead of CRJ’s confirmation, with the teaser leading people to believe that they’ll headline along with Phoenix. But it turns out, Arctic fans get a solo concert a day after the festival—an even better treat. After all, it’s their first time in Manila so it’s just natural to get a night all to themselves! Their 2013 album, AM, cemented the four-piece English rock band composed of Alex Turner, Jamie Cook, Nick O’Malley and Matt Helders as one of the most brilliant bands ever to exist. They pivot towards vulnerability in Tranquility Base Hotel & Casino before melding both in their most recent release, the sultry and mysterious The Car.

Do you wanna know if you can still secure a spot? Regular seats are still available via tickelo.com.

RELATED: What Went Down in Anne-Marie’s Manila Concert

So who’s it going to be: Phoenix, Carly Rae Jepsen, Arctic Monkeys or all? Let us know in the comments below!