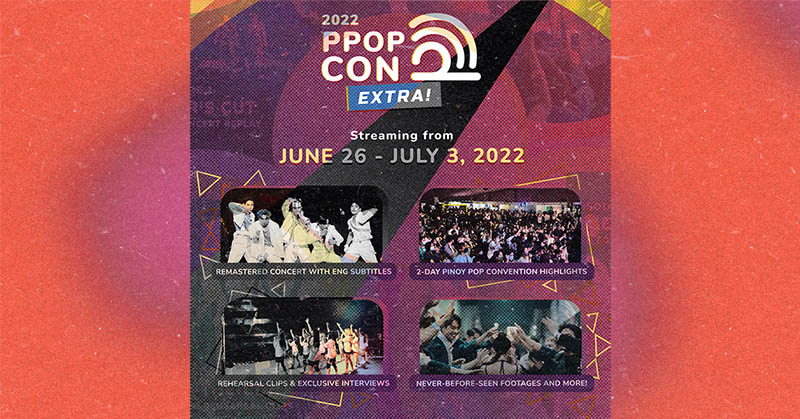 PPOPCON EXTRA! is here to Cure your Post-Concert Depression

If you’ve attended a concert in the past, chances are, you’re familiar with the feeling of post-concert depression. You’re at the concert of your dreams for an hour and a half (two if you’re lucky!) listening to your favorite artist, singing your heart out and being around people just as passionate as you are—and it all ends in a blink of an eye. There’s nothing quieter than the ride home after the concert. Though it’s been a while since we’ve had live shows, it’s almost certain that we’ll be feeling post-concert depression again.

With restrictions easing up this 2022, the live entertainment scene is starting to ripen: once-empty performance spaces are brought back to life with local artists, and the Filipinos’ favorite international artists are bound to make a comeback after being away for more than two years.

Earlier in April, the Pinoy Pop Convention (PPOPCON) marked the return of live entertainment by celebrating Filipino pop culture and music. The P-pop community has grown significantly the past three years, with fresh debuts from SB19, Alamat, BGYO, BINI, LITZ and more.

The event served as a debut stage for promising new P-pop artists like KAIA, G22 and DIONE, as well as a comeback stage for more senior P-pop groups VXON, 4th Impact and MNL48. The convention marked an event in OPM history, for artists, fans and organizers alike.

Three months after the memorable event, PPOPCON makes its comeback for a limited run with PPOPCON EXTRA!—an extended online concert featuring never-before-seen footage, remastered concert replay (director’s cut), exclusive interviews, rehearsal snippets, convention and concert highlights, and many more. P-pop fans can relive the nostalgia and joy they felt during the convention with over four hours (!!!) of exclusive, extended and extra content from the event.

For fans suffering post-concert depression, or even those who missed the concert, get the chance to experience the concert this June to July with PPOPCON EXTRA!

RELATED: All You Need To Know About The First-Ever PPOP Con

Fans can watch the online concert for a limited time on June 26 to July 3, 2022 via www.ticketnet.com and ktx.ph. Tickets will be on sale starting June 8, 2022.