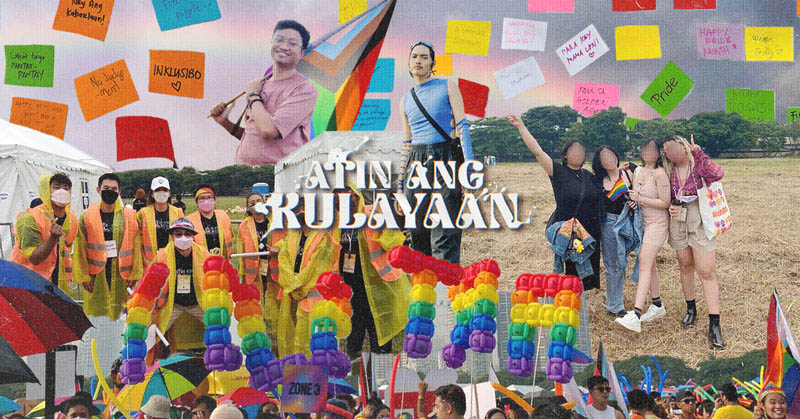 For 2022, given the ease of restrictions and the high likeliness of everyone gathering together, Metro Manila Pride brought our annual Pride Month celebration to the CCP Open Grounds. With the theme of Atin Ang Kulayaan: Makibeki Ngayon, Atin ang Panahon, Metro Manila Pride pushes the unified call of members of the LGBTQIA+ community, allies and organizations. Of course, one pertinent issue that profoundly affects the community is the blockage of the SOGIE Equality Bill in the senate. The community lacks laws protecting them, especially in an era where anti-LGBTQIA+ crimes remain rampant. The other issue Metro Manila Pride March carries is the call to reclaim our history amid an era of uncertainty.

Last June 25, over 29,000 attendees gathered in the CCP Open Grounds to join in the festivities and listen to the call of the LGBTQIA+ Community. It’s the first large-scale march and festival held on ground in two years, which honestly felt like forever to many. Booths featuring organizations, companies and small businesses lined the grounds while educational discussions and performances were well underway before the march proper. Overall, one can only describe the energy as high, contagious and palpable, especially after knowing that it’s been two years since the community gathered together IRL in this scale.

RELATED: #Pride2019 Through The Lens Of A First-Timer

So for some first-timers and first-timers-in-forever, these are their favorite moments and realizations from Pride Month and Metro Manila Pride 2022:

On their favorite moment: The way I burst into tears singing with the crowd during the afternoon program. It was the first time I felt like I belonged, and I wasn’t alone in this fight and struggle. It’s so nakakakilig and heartwarming to be with people or crowds who understand you.

On what Pride taught them: I recently came out as a trans woman, and I had thought that people would only see me as a woman once I’ve fully transitioned and I’m CIS passing. But no, seeing my fellow members of the trans community made me realize that my looks and my AMAB (assigned male at birth) characteristics don’t make me less of a woman. Finally, I learned that PRIDE, as a protest, will never end until everyone from every corner of the world is granted the rights to be themselves and are free from any forms of discrimination and violence.

On their favorite moment: My favorite memory from the Pride March is the whole experience! I remember telling my friend, “This is, by far, the first time I felt like wasn’t judged and discriminated against. This really feels like a safe space for me.” The next day I reflected on what had I told her, and I couldn’t help but smile at the thought. Aside from that, the fashion! Hunny, we cannot NOT talk about the gays serving IT. It’s as if the CCP [Open Grounds] was a whole damn runway, and I am living for every second of it!

On what Pride Month is all about: As soon as I stepped foot on the CCP Open Grounds, I knew and realized that this was it. This is the fight that we’ve been doing for a long time now, the fight started by the ones who paved the way, the fight that we’re representing for those people who can’t do it for themselves and the fight that we will still be doing until we get the rights and equality that we are deprived of.

RELATED: #Pride2019 Through The Lens Of A First-Timer

On their favorite moment: I enjoyed listening to the inspirational talks and stories from different LGBTQIA+ volunteer groups.

On what Pride Month is now: Pride marches from years ago are very different from the marches we have now. The community faced much worse inhumane discrimination back then, while we can enjoy parties and celebrations like these. Even though the hatred against the community is still rampant until now, I’m hopeful that the progress continues in the years to come.

On their favorite moment: Meeting so many years-long online friends that I met in person for the first time

On the biggest learning from Pride Month 2022: How important it is to be more proactive when it comes to fighting for our rights

On their favorite moment: Meeting people. I’m a very introverted person, so when I decided to volunteer for this year’s Pride March I was slightly scared. Scared because I wasn’t sure if I was going to even make friends, but then they just accepted me with open arms and I just loved every second of it. Plus, I enjoyed meeting people who weren’t volunteers— just seeing them and being really gay! 😂  It was overwhelmingly good, I have never had that much fun in my life, so I’m happy to say that I’ve definitely unlocked a core memory.

On what their Pride 2022 experience taught them: People may come from different backgrounds or were brought up differently, but in the end, we’re all just one community. Even though we have different sexual orientations or genders, we are all bonded by one big community filled with nothing but love and support for one another.

RELATED: A Call to Christian Allies

You heard it from them. Aside from a march carrying the community’s calls and an adamant form of protest, Metro Manila Pride 2022 also comes from a place of love. A love for each other and mutual respect for community members to the point that they gather and celebrate everyone’s existence. But beyond Pride Month, we should continuously push for the LGBTQIA+ Community’s best interests. Continue campaigning for the passage of the SOGIE Equality Bill and reclaim our history. Remember, the presence of warm bodies and actual humans stepping out and taking a stand make weighty shows of force. We’ll be able to achieve a better tomorrow with lots of heart and tireless persuasion.