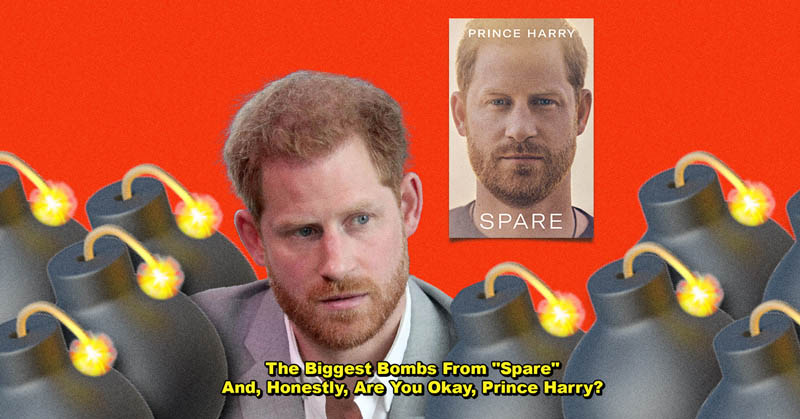 The Biggest Bombs From “Spare” And, Honestly, Are You Okay, Prince Harry?

What else is there to say about Prince Harry?

Despite their verbal wish to become private citizens, Prince Harry and Meghan Markle have been everything but. It seems like every month, the two have something—a documentary, a new family photo, an announcement—that everyone latches onto. But this week, the headlines are focusing on one thing: the spare’s Spare.

RELATED: “Harry and Meghan:” An Indulgent But Illuminating Documentary Series

Spare is a memoir by Prince Harry, which was released just this month, and was ghostwritten by J. R. Moehringer. And just on a separate note: wow, what would I have not given for the opportunity to listen to Harry ramble on—no matter how many times I would have secretly rolled my eyes.

The book has been described as unlike any other released by a royal. It’s been called explosive, ill-advised and downright weird. But for whatever reason Meghan Markle’s husband decided to do this, he has left us with a few bombs.

It happened on a grassy field. Behind a busy bar. It was quick and included some butt smacking. Our dear Duke of Sussex lost his virginity to an unnamed older woman who “liked horses, quite a lot” and treated him “unlike a young stallion.”

It’s not a secret anymore (was it ever?) that the current King Charles III had an affair with Camilla Parker-Bowles while he was still married to the late Princess Diana. When Charles eventually wanted to go public with their relationship—years after Diana’s death—Harry worried she’d be an evil stepmother. Fitting really, as royal fairytale step-parents are usually the worst.

But the meeting between Harry and Camilla was apparently quick, and it was evident that the future Queen Consort made an effort that was appreciated by the younger princes. “Close your eyes, over before you know it.”

But when it came time to marrying Camilla, Willian and Harry urged against it. Be with her, but don’t marry her. Prince Charles went on with it anyway.

Diana is the thread

When Harry was 12, he lost his mother in a car accident. The world knows this.

But in Spare, Prince Harry recounts how his father gave him the news: “I’m afraid she didn’t make it.” There were no hugs for him, just a comforting hand on a knee. In the infamous walk behind Diana’s coffin, Harry took strength from seeing William at the corner of his eye. During Diana’s burial, Harry cried—sobbed, with his face in his hands—and took comfort in the fact that there were no cameras around. Years later, Harry journeyed the road and through the tunnel that led to his mother’s death. The book reads: “I’d thought driving the tunnel would bring an end, or brief cessation, to the pain, the decade of unrelenting pain. Instead, it brought on the start of Pain, Part Deux.”

But more than the telling of these moments, one thing remains clear: Prince Harry is still haunted by his mother’s death. It is the one thing his mind keeps going back to.

And, of course, bombs are dropped left and right about Meghan, Kate and Prince William. I’d rather not dwell, but here:

There were so many stories told, points made and bombs dropped in Spare. There couldn’t be anything more, right? Maybe this is it. Maybe everything that could be said—regardless of whether or not they should have been—has been said.

At this point, there’s only one other question that needs to be answered: Prince Harry, are you okay?