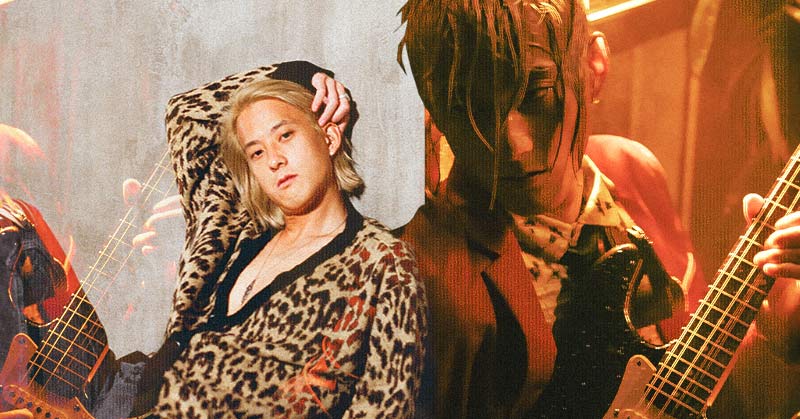 “Just follow what you love and don’t worry about what the world is telling you because [the world] doesn’t know what it wants until it hears it.”

The more time we’ve spent indoors, the more epiphanies we make. We seize the opportunities to do some introspection, whether it’s reevaluating our career paths or recalibrating our self-care methods to stay anchored. And for many artists, the time spent in solitude can reflect in their art. Sometimes, it even follows a particular cycle: looking back into the past and weaving stories about finding solace in isolation or just looking forward to life after the pandemic. Going through these topics seemed like the natural course of creation in the middle of quarantine: reminiscing, reflecting on reality and searching for things that bring us happiness, even when happiness sometimes feels like it’s lightyears away.

Such is the narrative of  DJ, musician and producer Elephante’s releases for the year. High Water is a glimpse into the artist’s past that he saw was parallel with life in quarantine. Meanwhile, Holy Ghosts reimagined Los Angeles as a ghost town. Both tracks are different from his usual sound, slowly veering away from the sharp and punchy electronic dance music he’s been known for as electric guitar chords and slower beats lead the way.

But now that live shows are slowly happening in the United States, Elephante finds happiness in the rush of the crowd in Dopamine. The track revisits the thrill and exhilaration of a long quest for happiness, reigniting the fire you once thought went out a long time ago. Through the high-energy synths and addictive beats that invite you to dance, Dopamine invites you to seek your own shot at happiness in a matter of four minutes.

Last September, we caught up with Elephante—whose real name is Tim Wu—about his latest single, Dopamine, his upcoming full-circle moment and finding your own formula. During our short chat, I learned that the musician and DJ lived and thrived on stage, how he went back to his roots as he spent time in isolation and that the pandemic left a show-shaped hole in his life. Luckily for him, that void is growing smaller as he performs more shows, including his dream stage at EDC Vegas, and that his album Heavy Glow is on the way.

Wonder: What was the major inspiration behind your new single, Dopamine?

Elephante: So Dopamine is just about whatever makes you tick, whatever gets you excited, the thing that kind of drives you and the thing that you’re searching for. For me, it was personally about performing onstage and just the rush of being on stage, in front of fans and watching everyone sing and dance. There’s really just nothing like that, and it’s about that constant search for that joy and the things that make you inspired, excited and wanna get up in the morning.

W: Dopamine’s sound is energetic and more upbeat than your earlier releases Holy Ghosts and High Water. What pushed you to return to your House roots for this song?

E: I think it’s just a natural evolution of the things I’m excited about. I still love dance music. I still love house. I still love that high-energy music that I’ve always made. Holy Ghosts and High Water were exploring a different territory, but the old sound is still a part of me. The album shows a broad range of all of these different sounds.

The way I make music is: I always make what I’m excited by and whatever the inspiration strikes. I don’t think too much about it and just go with it. I’ve learned in my career that whenever you’re trying to force something, whenever you try to make something that you’re not excited about at the time, it never works out. During the pandemic, without all of the shows—the higher energy stuff—I wasn’t excited to work on it. But now that I’ve gone out and played a few shows, that felt like the right song for everyone to hear right now.

W: The pandemic put us in a time where self-reflection became an important part of coping with tough times. How were you able to manage creatively, mentally and emotionally during the peak of lockdown?

E: If I’m being honest, it wasn’t easy. There was so much going on around the world. Especially as a creative, I spent my whole life working on something and getting good at something and dedicating my life to it. And it [was] basically put on hold. Of course, I know in the big scheme of things that I am very lucky, and there’s a bigger tragedy than what I was going through. But at the same time, it was hard.

I think, long-term, it would be good for me because I had to turn inward and figure out what was important to me creatively. It gave me time to dig and see what music I wanted to make without the pressure and just seeing who I am and what I want to do. This album is a product of that and just figuring what I was excited about. There’re no crowds to please. There’s no way to gauge what people like, so it’s just…I went back to what made me want to start making music: writing songs, playing guitar and singing. That’s what the album turned into.

W: We heard that you’re performing at 88Rising’s Head In The Clouds Festival and the mainstage of EDC Vegas. How excited are you to play these shows?

E: I’m so excited, but part of me still can’t really believe it? This is what I’ve dreamed of doing, and to actually be up there…I remember going to EDC and watching the mainstage and telling myself, “One day, I [will] be up there.” Now, it’s actually happening. It’s almost so, so big that it almost feels surreal. I’m proud of all the music I’ve made and the show I’ve developed. I can’t wait to go up there and kind of show everyone. It’s a little scary; it’s a little exciting at the same time.

I have a creative partnership with 88Rising and there’s a lot of cool stuff that’s come out of the last year. The music video for High Water was just kind of the start. I’ve been holding out on a lot of stuff because there haven’t been many shows, but the time has come to let it all loose.

RELATED: The 88rising Head In The Clouds Festival is Back With the Dream Lineup

W: What’s one item you can’t go on stage without?

E: On my last tour, I got into wearing bandanas. Every show, I was wearing bandanas and at the end, I’d throw the bandana in the crowd. I was playing so many shows, so I was spending so much money on bandanas. So I started making my own tie-dye bandanas. Then the next tour, I got the idea to paint custom shirts for each show and write what the city, show and date was. Then I would take that off and throw it into the crowd.

W: The sky’s the limit! Name the artist you want to collaborate with?

E: Growing up, John Mayer has always been my idol. He was the reason why I wanted to make music. I think that would be a cool thing. Either him or maybe Frank Ocean would be really cool, too. I’m inspired by artists and music that I love but are pretty different from the music I do. Some of the coolest collaborations come out of different styles.

W: Lastly, we noticed that you like to play and experiment with different styles and sounds. What’s your advice to young musicians and creatives struggling to experiment with their art?

E: Look, it [can] be hard sometimes. But at the end of the day, you just have to be yourself and you have to find what’s exciting for you. Don’t worry about following trends or trying to make what you think is popular at the time because that’s always moving. By the time something gets popular and you’re like, “Oh, this is the trend I have to follow,” the world’s already moving on to the next one. Just follow what you love and don’t worry about what the world is telling you, because [the world] doesn’t know what it wants until it hears it.

You just have to be yourself. It’s going to be a lot of hard work, and there’s no formula. I’ve learned in my career that if you follow what you believe in, it might not work, but if you try to follow someone else’s formula it definitely won’t. So you just have to do your best and do what you believe in. If you focus on that and keep working hard, good things will come.

While we wait for our own collective situations to improve, we’ll be looking for our own shots of Dopamine.