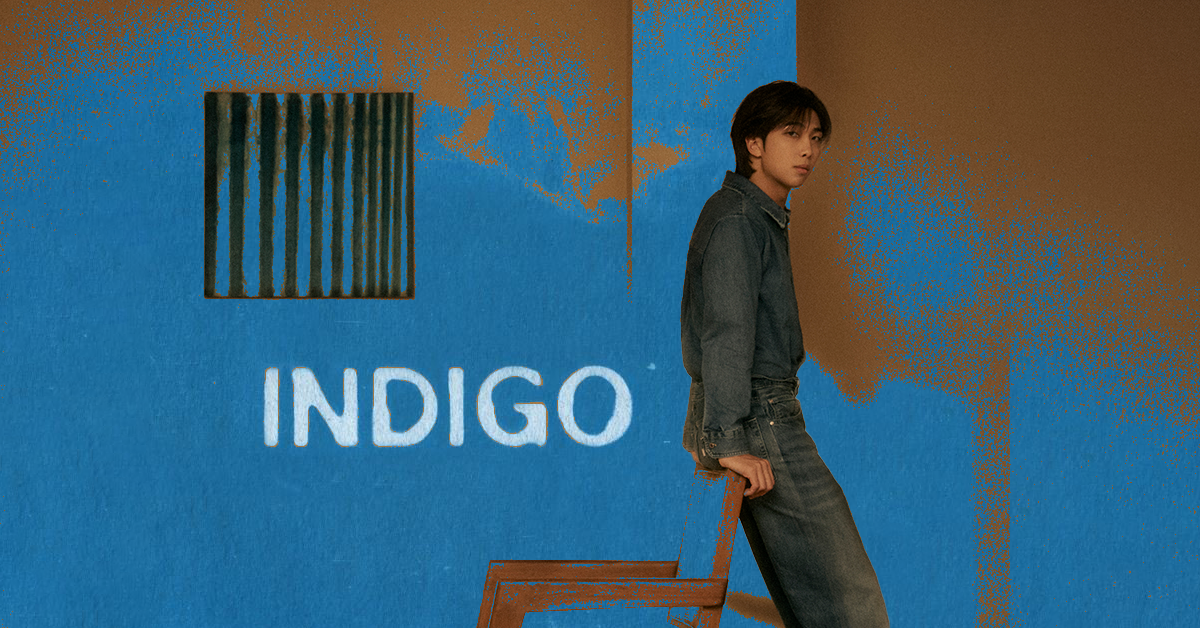 RM reclaims his artistry and personhood in his full-length album, “Indigo”

When I was first properly introduced to the music of BTS, I had just turned 20 and was in my final year of university. At first, I was hesitant to jump on what I thought was an overhyped bandwagon. But as society soon found itself amidst a global pandemic, ushering an unprecedented level of anxiety and uncertainty, I found comfort and solace in the sound—not only of BTS but of its members.

Among its seven members, I found myself resonating most with the group’s leader, RM, who—outside of the group’s activities—would spend his time walking around museums, hiking up mountains and chasing after crabs at the beach. There was an immediately perceptible warmth and familiarity to Kim Namjoon, the man behind RM. More than having similar interests with him, Namjoon had a distinct and enjoyable wit he brought to his lyricism.

From writing a song about how Pluto lost its planetary designation to producing a single on the joys of riding his bicycle, Namjoon brings a unique storytelling approach to music that he carries over into Indigo, his first full-length album in his 15-year career as a musician.

RELATED: The Enduring Charm of BTS’ The Most Beautiful Moment in Life

The album begins with Yun, a profoundly soulful and poetically intense track on Namjoon’s reflections on what it means to be an artist who is true to who he is. Inspired by the works of South Korean painter Yun Hyong-keun, Namjoon brings to life—with the help of renowned singer-songwriter Erykah Badu—the dilemma of living creatively, passionately and honestly in a society that places a premium on virality and hype.

I wanna be a human

‘Fore I do some art

But there’s gon’ be my part

Now you could feel my madness

Yun sets the tone for the emotional and truthful autobiography of his 20s. As many of his fans know, Namjoon spent his 20s—or “adultolescence,” as I fondly call it—under constant observation and scrutiny as part of one of the world’s most prominent musical acts. Living as an idol left Namjoon little to no room for genuine growth in the eyes of the public—a reality he grapples with in Indigo’s second track, Still Life.

In this collaboration with Anderson .Paak, Namjoon takes cues from the visual arts genre of the same name, drawing parallels between the inanimate subjects of still life paintings and the static perception of RM in the media. For instance, despite having held himself accountable for the misogynistic lyrics he had previously written, including having his succeeding lyrics reviewed by a Women’s and Gender Studies professor, the media has continually circled back to and reified a past image of who RM was. Nearly 10 years after debuting, Namjoon takes this track to tell the world that he has grown and continues to grow far beyond the expectations that have been set on him. Or as he says in the song: Ya can’t lock me in the frame, I’m movin’.

Namjoon carries this narrative over in the album’s sixth track, Change pt.2. Although his romantic relationships have never been publicly confirmed or disclosed, this track is Namjoon’s callback to a pernicious past relationship. Co-written and produced by frequent collaborator EAeon, the track surfaces the anger and frustration of being in a relationship with someone who doesn’t see you for who you truly are—feelings we know all too well.

While Namjoon and his fellow members have received well-deserved recognition for their hard work and artistry, the global expectations of BTS have left an immense burden on Namjoon who serves as the group’s leader. With the group nearing its 10th anniversary in June, it is unsurprising that the past decade has left Namjoon feeling burnt out, which he has not shied away from speaking about.

In Indigo’s eighth track, Hectic, Namjoon wittingly takes music reminiscent of those on Fashion Week runways to confront the romanticization of the hustle and bustle that’s part and parcel of being a global superstar. Here, Namjoon is honest about needing to find a reason to keep going on this path where his passion for music is so intimately intertwined with the need to navigate people who care less about his art and more about his fame.

The precarity of being young

As a truthful retelling of Namjoon’s 20s, Indigo brings to the fore the precarity of being young. Among many uncertainties, Namjoon, much like other South Korean men his age, is expected to undergo government-mandated military service that would inevitably take him out of the public eye for nearly two years. Although he and his fellow BTS members have been steadfast in their intention to serve when they are called, Namjoon has also previously expressed worries about their fans no longer supporting them after they come back from their hiatus.

But in Wild Flower, the penultimate track of the album, Namjoon speaks of this freedom that comes with being surrounded by “flowers without names,” especially with his “fame [turning] into shackles,” essentially hinting at this sense of tranquility in taking the next few years away from the limelight. At its very essence, Wild Flower is an openness to and acceptance of the public and perceptible silence that we will all hear from Namjoon in the coming years.

The music video is just as telling. Namjoon uses “burning fireworks into flowerworks”—an ingenious wordplay and reference to how BTS concerts always end in grand fireworks displays—to illustrate a contrast between the glamorous life he’s lived as RM for the past decade and his time as a private citizen during their hiatus.

How poetic is it, then, that Namjoon would choose this track as the lead single of Indigo, especially with his government-mandated military service on the horizon.

In an industry where he is expected to compromise his identity and creativity to churn out the next big thing, whether another chart-topping BTS song or a sold-out world tour, Indigo is a resistance to society’s pull and demand to chime into its noise and chaos. It is a reclamation of Namjoon’s artistry and personhood; it is his way of saying that he has come to terms with simply being Kim Namjoon, the museum-going, crab-chasing and bicycle-loving man behind global superstar RM of BTS.

With his imminent military service, Indigo is a fitting parting gift, especially for those of us who began our 20s in such a tumultuous time with Namjoon by our side. It’ll be the comfort we can hold on to as Namjoon spends the next year or so away from the public away. But as the companion to our 20s, Indigo will be a reminder for us to slow down, make room for growth and honor this time of our lives, including its ugly, painful and embarrassing moments. And if Namjoon has taught us anything, it’s that at the end of it all, we will have become a person we can love and accept.