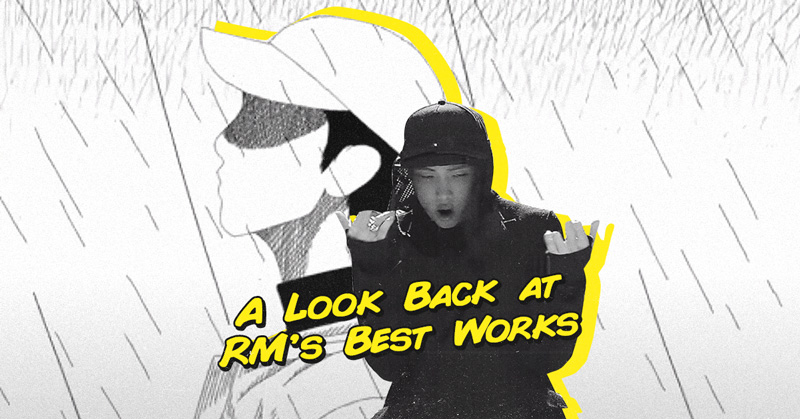 A Look Back At RM’s Best Works Ahead of “Indigo”

From “Do You” to “Intro: Persona,” we break down some tracks by RM

We can’t be the only ones freaking out, right? After mentioning to Pharrell Williams that his album is “90% complete” and moving over to Weverse to tell his fans ahead of the official announcement, RM finally divulged the details of his upcoming debut record, Indigo.

The highly-anticipated album will drop on December 2 at 2PM KST—that’s 1PM in our timezone. Coming in right after J-Hope’s and Jin’s respective projects, RM will finally release his first official album. Of course, fans are thrilled to hear more music from the South Korean artist. But before you ask, “What’s all this attention for?” allow me to explain.

Indigo serves as another pivotal moment for BTS’s leader, producer and master lyricist.  Throughout his career, he’s participated heavily in building his group’s rich discography, assisted in songs for different acts and released two of his own mixtapes, RM and mono. With 200 works credited to his name in the Korean Music Copyright Association, RM is the youngest member of the association to reach that number and the second most credited name in the database. But, if anything, he’s one lean, mean writing machine—and after some time off spent  recuperating, he’s ready to open up again.

Even more than a long list of credits, RM’s mastery of all his skills is no joke. An impeccable wordsmith makes for a lot of lyrics that become life-changing. He’s also a decorated rapper who can effortlessly switch flows. And, most importantly, a proud celebrity who isn’t afraid to tear the curtain down and say it like it is. RM can come from bragging about how he doesn’t need Hugo because he’s already a boss to telling the world about his one-sided love-hate relationship with Seoul.

RELATED: 7 Albums We Can’t Wait To Stream on Spotify: November 2022

Of course, I could go on and on about him, but as we say, let his music do the talking. So ahead, we look back at some of RM’s best works.

Intro: What Am I To You

In BTS’s 2015 album, Dark & Wild, RM opens the album with Intro: What Am I To You. The soaring rap track goes heavy on the strings to heighten all the emotions, but RM’s ardent flow and honest lyrics make it whole. It’s a plea, a bargain so strong that a language barrier proves useless because you feel everything he says on the track. With lines like, “Baby, you should know you change all of my negatives to positive,” and “Even if you’re a fiery road, I’ll firmly walk on it,” who wouldn’t swoon and reconsider?

RM, who still called himself Rap Monster, also released his first eponymous mixtape in 2015. With over seven million streams on SoundCloud, this track proves to be the most popular out of the compilation. With simple and rhythmic metronome beats, RM lets his flow and lyrics do all the talking. As he pushes back against blackness and whiteness in society—there’s nothing wrong with being one or the other as long as you Do You.

While recent years have witnessed RM meet many of the icons he’s looked up to, his first full circle moment happened with a team-up with rapper Wale through Change. The electronic R&B single has RM retaining his observant nature and progressive messages while paring the aggression back. Instead of a “fuck it” mentality, RM and Wale challenge the problems present in the East and West, from education to cyberbullying and racism, while keeping their hopes high. After all, the only thing constant in our world is Change.

RELATED: The Enduring Charm of BTS’ The Most Beautiful Moment in Life

Perhaps the most concrete evidence of RM’s lyrical prowess lies in Trivia 承: Love. The rapper shows how his view on love and life changed and has one of his most iconic lines. He raps, “Although I and U are still very distant, fuck JKLMNOPQRST, I crossed over every letter and reached you.” It’s at this point of BTS’s careers and discography that they explore love not only in the context of romance but in all its forms. For this song, RM doubles down on the natural progression of falling in love—with a person, a brand new thing, with life; it all comes naturally.

His 2018 mixtape, mono, pulls a 180-degree turn from 2015’s RM, with the artist turning inward and reexamining himself through seven calm and cohesive songs. Honestly, the entirety of mono deserves a spot on this list, but perhaps the most stinging track from the mixtape (or playlist) is Forever Rain. In this track, RM basks and examines the concept of loneliness over the indie-rap instrumental. In this song, his thoughts don’t lean towards patronizing or exaggerating. Instead, forever rain offers a space of comfort for those who trudge through loneliness and see the phenomenon as a friend, a cloak and a shield from the outside world.

For the first track off Map of the Soul: 7, RM comes in with Intro: Persona, which features the old-school hip-hop instrumental of one of his earlier works, Intro: Skool Love Affair, from 2014. But more than lamenting the blooming feeling of first love, the rapper turns inward. In this confident track, he analyzes his definition of “the self.” Is his real identity and personality just RM of BTS? Or is it a mix of the hats he wears: an artist, a brother, a sibling, a person passing by the street? At the end of it all, he embraces his complexities and doubles down on his mission, “I just wanna give you all the voices till I die / I just wanna give you all the shoulders when you cry.”

Got any personal favorites from RM’s long discography? Let us know in the comments!