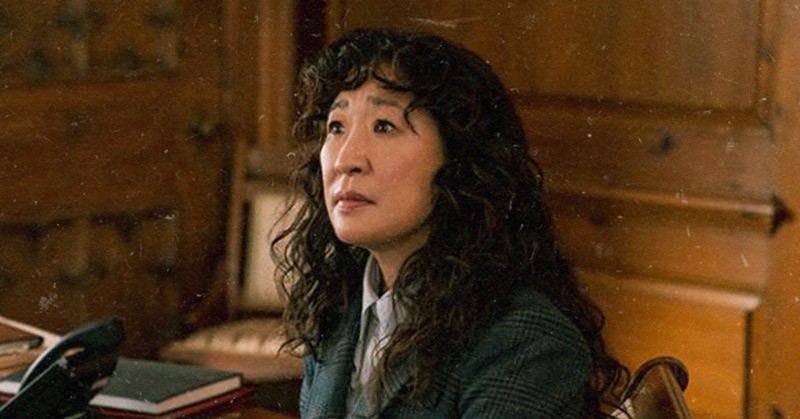 Netflix’s new dramedy schools us on nuance and choosing ourselves

The first episode of The Chair sets the stage for how much of a wild ride the show will be. A giddy Ji-yoon Kim (Sandra Oh) is going about her new office. It’s her first day as the chairperson of Pembroke University’s Department of English. Of course, being the first woman of color to achieve that feat makes her first day extra special. She basks in her excitement bolstered by a gifted plaque that read “Fucker In Charge of You Fucking Fucks.” But all that boss bitch magic dissipates once Ji-yoon’s chair breaks and she falls flat onto the floor.

The scene isn’t just for the sake of slapstick comedy. Instead, it’s a representation of the department she’s going to run, and a foreshadowing that it’s not going to be a smooth ride.

Directed and written by playwright-slash-actress Amanda Peet, The Chair is a brilliant comedy of errors with theatrical scenes. (Literary pun intended.) In six episodes spanning more or less 40 minutes each, they managed to pack mishap after mishap that foils the tasks Ji-yoon did as a chairperson. We see her try and change things up in the predominantly white male department, but another issue often thwarts her.

When low enrolments, clashing professors and students who fight back shake the English Department, Ji-yoon and the rest of the higher-ups grapple to keep the school afloat. Unfortunately, Pembroke’s administration was too busy protecting their reputation that they failed to see what their students were genuinely fighting for: a change in the old culture. The institution was more obsessed with their titles and achievements rather the students they teach and the world they live in. “Why should they trust us?” Ji-yoon interrogates Dean Paul (David Morse). “The world is burning. And we’re sitting up here worrying about our endowment? Our latest ranking on U.S. and World report?”

And as much as Ji-yoon pointed it out quite late, she tried to change the culture with the power she still had.

This is why The Chair is an absurd yet almost accurate mirror of the academic world, coming in hot with punchy jabs that we can only describe as timely. It pokes light-hearted fun at the academe without creating enemies out of a particular group or personality. The show depicts the clash of the youth trying to change the world against the institutions preoccupied with saving face. Issues in the academe are presented the way they are in classrooms: filled with nuance. There are grey areas between the black and white: academic cancel culture, conservative professors changing opinions, the motivation behind doing stunts for shock value to addressing generational differences between boomers, millennials and Gen Z-ers.

But the biggest lesson from The Chair lies with Ji-yoon’s character as she reconciles her duties as a chairperson, educator, mother and human being. She’s constantly spread out so thin, balancing the dynamics among the students, different faculty members and higher-ups. Heck, Ji-yoon even took it upon herself to whip a grieving Bill Dobson (Jay Duplass), who’s in danger of being fired, into shape while mothering a child all on her own.

RELATED: Insisting on an Academic Freeze Isn’t the Solution (or Why Are We So Hypersensitive?)

One of the most powerful scenes of the show is where Ji-yoon attempts to assign Lila (Mallory Low) to a new dissertation adviser, given that Bill’s future as a professor seemed bleak. In a moment of realization, her student says, “You’re putting me on a lifeboat.” To which Ji-yoon replied, “I feel like it’s time.”

Everything just clicked when Lila asked her, “Do you have one?”

Ji-yoon’s life might have been the dream once she got the position of Department Chairperson, but everyone could tell that it brought more harm than growth. The work hindered her from fully supporting those who needed her: her students, coworkers and family. Everything fell into place when she let go and allowed fate to run its course.

The Chair schooled us on an important lesson: the most radical thing you can do is to choose yourself. It’s a rare choice in an era that pressures us to stay always-on, but it’s an art that pushes you to be a better person, to be more present. It teaches us that when we feel like we’re drowning, we need to learn how to let some things go for peace and our own survival.

Catch The Chair on Netflix.