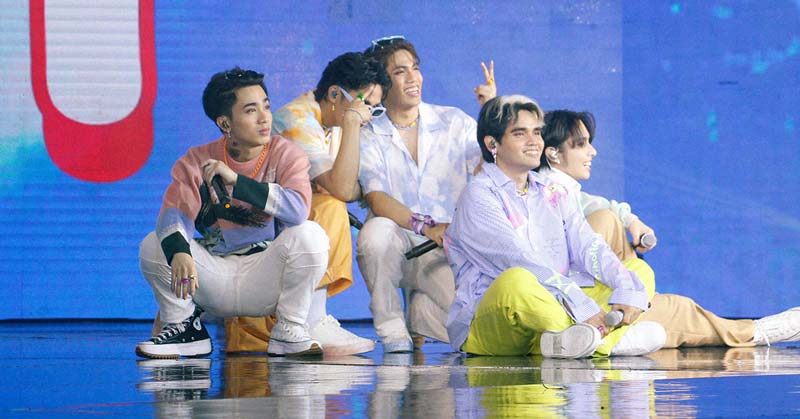 SB19 Retells Their Story As They Get Back In The Zone

From Go Up to What?, the concert tells their origin story

SB19’s Pagsibol EP was evidence of their growth and an homage to their beginnings. Their Back In The Zone online concert was an extension of that, a more detailed re-telling of the path they had taken and the lessons they picked up along the way. The setlist, the costume changes, the interviews and every bit in between retold SB19’s success story in the best way possible.

Guest performers welcomed the audience before SB19. Mona Gonzales did a cover of LiSA’s Gurenge. Following after was 14-year-old Alex Bruce who performed Yakap with a swagger that one can only describe as magnetizing. Sibling quartet 4th Impact closed the special performances set with their iconic rendition of Bang Bang by Ariana Grande, Jessie J and Nicki Minaj.

The amazing performances keep on coming! ?? @4thImpactMusic are here to serenade us with their voices.

P.S. We are LIVING for their fits ? pic.twitter.com/t5XKyqw6dn

RELATED: The First Local NFT Single Has Been Released—What Does It Mean and How Do We Feel?

Who was SB19 in the beginning?

SB19 officially kicked off Back In The Zone with an explosive performance of What? It’s like beginning a story in medias res. The stage introduced SB19 today, the group that’s raised our flag and put P-pop on the radar. But instead of bolstering that introduction with a strong track, the boys flipped the switch and performed Tilaluha (complete with an umbrella as a prop). Thus began the trip back in time.

The boys went back to the song that started it all: Go Up and Alab (Burning) back to back. Seeing it performed in 2021 shows off the immense growth they’ve managed to achieve in a year. The continuous homage to their days from Get In The Zone included their other songs, such as the painful ballad of Hanggang Sa Huli and an acoustic version of the EDM track, Love Goes. This stripped down performance is one of the best testaments to show harmonious SB19 sounds when they’re together.

Now we've got #Stell taking over with his own version of #All By Myself" ?#SB19BackInTheZone #BackInTheZone pic.twitter.com/cXRbnOZyZj

The lineup of the highly-anticipated solo stages began with Justin, the youngest member and the concert’s creative director. He sang a rendition of Coldplay’s The Scientist as photos from his childhood flashed onscreen. Stell followed right after and wowed the audience by singing All By Myself by Celine Dion. The vocals! The high notes! The emotions! We were left reeling. After Stell’s spine-chilling performance, leader Pablo took center stage for his original song Kelan. The anthem wouldn’t be complete without his brother, Josue, who Pablo brought onstage to rap his verse.

A’TINs were in for some whiplash when it was Ken’s turn. The smooth and sensual R&B track called Palayo (with lines in Bisaya, too) showcased his vocals and killer dancing skills. To close the solo stage portion was Josh and his cover of One Direction’s Drag Me Down that showed thanks to the supportive A’TIN and shut down the harshest of their critics. True to what they teased during their earlier press conference for the concert, each solo highlighted all of their individual skills and strengths as performers.

After revisiting their roots and showing off what they can offer individually, SB19 returns to the stage as a unit. As SB19 pulled up in their horror garb and eerie stage setting for MANA, you could tell that it continues the energy of Josh’s stage. It’s their collective way of establishing their humility. Much like the manananggal’s two halves simultaneously being rooted to the ground and flying high, SB19 will continue keeping their feet on the ground as they soar to greater heights. Cruising on the wave of excitement, SB19 followed up with the fun Bazinga stage that kept the adrenaline pumping.

They winded down and began to sing their homage to the people who helped them continue their paths. First, they sang their ode to their parents with MAPA. Their Barong Tagalogs added a very personal and familiar touch to the performance. The same thing goes for the stage of Ikako, an ode to the frontliners who continue to keep everyone afloat throughout the pandemic. The boys closed the show with the fun and colorful performance of SLMT, filled with adorable formations that showed the joy they feel while they perform. It was dedicated to their most loyal fanbase, A’TIN. The group never failed to miss any opportunity to thank their fans. A’TIN supported them throughout the journey, through ups and downs, and it seemed right to send them off in high spirits.

RELATED: Key Style and Beauty Notes From Our Cover Shoot With SB19

Much like any concert, Back In The Zone ended with a surprise encore. SB19 re-emerged from backstage donning their official merchandise and sang a different version of What? The members switched singing parts and even brought out their backup dancers and staff to bow to the crowd. As much as the end was happy and cheerful, you can’t help but feel a little bit emotional to see how far they’ve come.

Back In The Zone has shown why SB19 is considered one of P-pop’s mainstays and pioneers. They’re armed with their own strengths that harmonize once they come together. Despite all of their big achievements, such as millions of YouTube views, top-selling concerts, a BBMA nomination and a fast-growing fanbase, they’re still a force to be reckoned with. We can’t wait to see how Pablo, Stell, Ken, Josh and Justin will rock the stage in real-life concerts. Here’s to hoping that it’s happening soon.

Lucky for A’TIN who missed the show, you can catch the rebroadcast of Back In The Zone on August 22, 2021. Get your tickets via KTX!