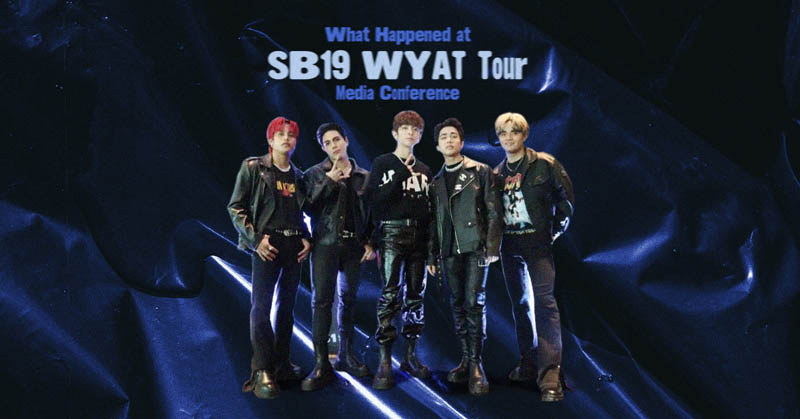 The SB19 WYAT Tour Media Conference was all that (and more)

Calling all A’TIN! No need to feel disconnected because we’re here to keep you up to date on everything that happened at the SB19 WYAT Media Conference at Novotel, Quezon City last September 13.

The P-pop kings have certainly made a mark both locally and internationally with their disco-pop track WYAT (Where You At). The tune topped the iTunes Chart in countries like the Philippines, Singapore, Hong Kong, Qatar and the UAE. There’s no doubt that we were jiving to the beats and falling in love with the meaning behind the single. SB19’s lead rapper and sub-vocalist Josh mentioned at the media conference that they “want to make the reconnection happen…nothing beats physical connection,” and they want to show this through WYAT after the pandemic and challenging times in their personal lives. Through their single, they boys wanted to go back to when everything was okay and when people could easily be with one another.

Justin, WYAT’s creative director and sub-vocalist, says, “we always involve ourselves in everything we do and oversee everything so that it’s something we like.” We can really tell how they’ve put their hearts and souls into the process and how the track has become a collection of different people as well as different minds. The boys also revealed that they put multiple “Easter eggs” in their WYAT music video that fans might notice if they watch it over and over again.

The boys also mentioned that they wanted to make the WYAT experience meaningful for the fans because they “want to give back to them.” Ken said that there was a story behind WYAT, and it’s something that the fans will definitely understand.

During the media conference, the five boys recapped the dates of their local and international shows for the WYAT (Where You At) Tour. The tour kicked off on September 17 with a sold-out show at the Araneta Coliseum and will continue in Clark, Cebu and Davao. Starting October 2022, SB19 will be touring in Dubai, New York and Los Angeles, to name a few.

So to all international A’TIN, you can expect to see Pablo, Josh, Stell, Ken and Justin at a city near you! During the conference, the boys also mentioned that they are “very excited to meet A’TIN locally and internationally, as well as perform for them live.”

When asked how SB19 would like to be known internationally, Pablo mentioned, “first impressions last, and we want to leave a good impression so we’re focusing on training.” And we can tell that the boys have been so dedicated and have been going through rigorous training. The five mentioned that they’ve been preparing a lot because they’re performing all over the world and, through their performances, they’re confident that they “will be taking this to the next level and will take Filipino talent to a global scale.”

When asked why they felt the need to re-record WYAT as a single, the boys express, “kulang sa instruments and instrumentation, mga tunog that will make people want to groove to the music.” And now after we’ve seen how much they’ve grown and how their musicality has evolved, WYAT is a global hit! The boys said they needed “time to breathe and to step back to see what was needed”—and now they are very satisfied with the product, and so are we!

After the WYAT Tour was mentioned, the excitement couldn’t be contained and the boys were asked if there was a possibility of a homecoming concert! To this, they replied that they can’t promise anything, but we’re keeping our fingers crossed.

.@imszmc talks about how they get heavily involved with their work and how it’s important for them to be able to project their ideas into their work 🙌🏽#WhereYouAtSB19#WYATTour pic.twitter.com/faezOBh9SP

We can see how much the boys have grown together and how strong the A’TIN fanbase has become. We couldn’t help but feel kilig when the boys mentioned that they huddle before shows, hype each other up and even do battle cries since they get their strength from one another!

We are so excited to witness SB19 reach even further heights and we can’t wait to support them during their WYAT Tour. See you in one of the shows, A’TIN?