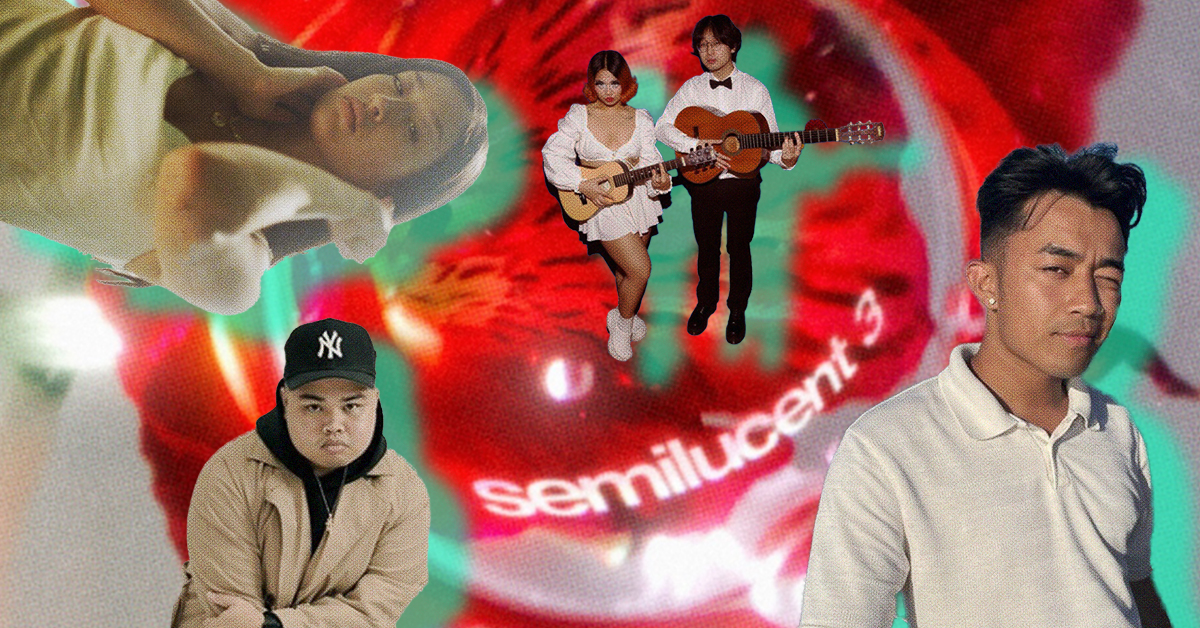 Even with two mixtapes and counting under its belt, no one can really predict how the next semilucent compilation will ever sound. Will we get cheekier, Ylona Garcia-esque bops? Or will we be bumping and grinding to bars only Guapdad 400 can deliver? As the Filipino-led 88rising sublabel dropped the third mixtape, we’d like to believe that PARADISE RISING outdid itself again. This time, they dip their toes in the water with a mesmerizing foray into the alt-R&B sound. Think 90s-era slow jams with a touch of modernity, or bedroom pop instrumentals with lyrics that shoot straight at the heart.

In celebration of Filipino American History Month, semilucent 3 features rising Filipino artists from the United States, Canada and Australia. DACEY, kristina alcordo, 8rae, Cabu and Gabby Nacua have their own distinct flavors and genres to bring to the table.

If semilucent explores the soothing shores of paradise and semilucent 2 dives into the darker side of tropical dreams, semilucent 3 inspects what goes on in stillness. Four hypnotic tracks create a compilation that perfectly captures moments spent in silence, conversations held from across the room and earnest daydreams.

RELATED: 88Rising’s HITC Manila lineup Is What You Need To Brighten Up Your Day

The EP starts with kristina alcordo’s Senseless, a sensual R&B and soul track that opens on a hypnotic note. The understated instrumental gives way to alcordo’s husky drawl as she croons about letting desires take control, à la Daniel Caesar and Summer Walker. It’s a quiet beckoning, an invitation that lures you to let your guard down and let your body take over. Senseless brings us back to the shared connection between two people, may it be eyes meeting from different parts of a room or the satisfaction of moving together like clockwork.

Canadian duo DACEY, made up of Dacey Andrada and Justin Tecson, follows up with the smooth and beachy DON’T WAKE ME UP. Something about the track sonically sits with Toro y Moi’s MAHAL. Perhaps it’s the indie and lo-fi beats laying a foundation for Andrada’s spunky vocals. But don’t be fooled because the lyrics narrate the vulnerable resentment of a love that has run its course. The bittersweet single sounds like the background song to days passing by in a flash, a montage of memories we can only pray to get lost in again.

Sydney-based electronic dance beatmaker CABU recruits Gabby Nacua for the addictive Go Back. In the song, the producer works his magic with 808 beats, adding some flourishes care of his EDM expertise. Coupling hip-hop elements with warped guitar strums creates a tantalizing instrumental that will have you vibing before you know it. Nacua’s vocals add a perfect touch, throwing it back to the 90s when divas like Aaliyah ruled the airwaves. Lyrically, however, the singer laments about leaving things in the past. It depends on the listener if Go Back transforms into an optimistic anthem or a story of someone convincing themselves to no longer remain in the past.

Orange County-based rapper 8rae comes in to close out semilucent 3 with Panalo, an easy-going song about rising from the ashes. The song’s instrumental remains low-key, as smooth synths and twinkling sound effects get littered throughout the track. Effortlessly vibey, Panalo’s instrumental fits right with the lyrics that exude the casual cool of someone who’s finally content with their life. With lyrics like, “A couple months ago / Man, I was recording in my car,” 8rae boasts that he’s made it. Sometimes in stillness, we look at what we’ve reached and what we hope to achieve, and Panalo is that ideal state of mind we all want to land on sooner or later.

RELATED: Nine New Tracks to Check Out on Spotify: September 2022

PARADISE RISING’s semilucent 3 isn’t a reflection of either side of paradise. Rather, it holds up a magnifying glass to what happens during moments of silence. Sometimes it’s throwing all caution to the wind. On other days, it’s allowing us to mourn a loss. But at the end of the day, nothing is more satisfying than turning your back on the past and finally, pursuing your definition of “dreaming high.”

This Filipino American Heritage Month, let’s help emerging Pinoy artists from across the globe reach for the stars. Listen to PARADISE RISING’s semilucent 3 on all streaming platforms. Plus, cop tickets to Head In The Clouds Manila—we tell you why here.