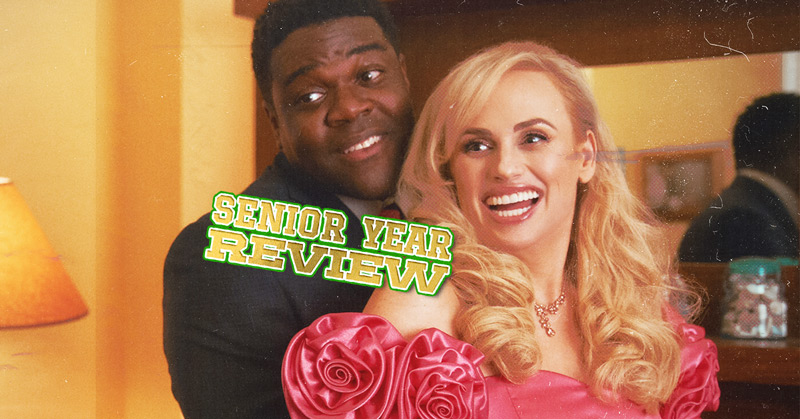 When life is difficult, you put on a ~bad~ movie like “Senior Year”

It was a gloomy Sunday, and I was still feeling the after-effects of a particularly hedonistic Friday. Instead of mindlessly scrolling through Netflix for something half-competent to pass the time, I settled quickly on Senior Year.

Making this selection went against all conventional wisdom and practice of judging a book by its cover (or in this case, a Netflix original by its trailer); it hardly appeared to be arthouse cinema. But something within compelled me to press the play button on the remote control, and the movie commenced. I hadn’t checked any reviews, but I did have some expectations–namely that it would be a formulaic, idiotic, half-baked waste of an afternoon. And for the most part, I was right. But somehow, for much of the two-hour runtime, I found myself enjoying it.

The premise is fairly straightforward. Stephanie Conway is a high school cheerleader who wants the perfect life for a teenage girl: to be popular. Her primary goals are to become prom queen, end up with the hottest football star in school, become rich and live happily ever after. Unfortunately, her dreams are never realized after a cheerleading accident lands her in a 20-year coma. She wakes up two decades later. Now 37, Stephanie (Rebel Wilson) is shocked to realize she’s been unconscious for so long. She recovers almost immediately, gets in touch with her old gang Martha (Mary Holland), now the high school principal, and Seth (Sam Richardson), and decides to go back to high school and reclaim the title that eluded her: prom queen.

The film is far from original, and often feels like a rehashed, inferior version of Never Been Kissed and Mean Girls. But there is an allure to it. Witnessing Stephanie’s alignment to 2022 is not without its comedic and entertaining moments, such as her struggle to adjust to Instagram and smartphones, initially thinking the latter were scientific calculators. The throwbacks are plentiful here, often to the tune of Mandy Moore’s Candy or Britney Spears’ Crazy, with a random cameo by Clueless star and 90s darling Alicia Silverstone as a sage Lyft driver.

The teenage, influencer culture of 2022 are different too: “progressive,” inclusive, oft non-binary kids that practically live online–a stark contrast to Stephanie’s late 90s values, making the audience realize that two decades doesn’t seem that long ago, and that our collective society has drastically changed.

While Rebel Wilson shouldn’t be anticipating any Oscars for her performance for the project and script she was given, she delivered a perfectly adept comedic performance with some randomly-placed but humorous dance scenes and refreshing political incorrectness (it’s okay, her mind is still in 2002). Her thick, unaffected Aussie accent juxtaposed against suburban Americana has comedic value in itself, too.

RELATED: Looking From The Outside: How Buzzfeed Unsolved and Aria Inthavong Approach Stories From The East

In many ways, Senior Year is so full of plot holes, shallowness and predictability that it is the critic’s dream. It’s a very easy target. But for what it truly is—essentially mindless escapism—it is entirely watchable, even agreeable at certain junctures. We have, after all, just lived through a global pandemic, a war in Ukraine and an incredibly stressful election period, among many other things. At a time when it is sorely needed, Senior Year delivers ultralight, cheerful viewing with minimal depth and a happy ending.

Senior Year is a good bad movie, but it is also self-aware, triumphantly basic and knowingly fills a void; the fact that it is now a commercial success is valid evidence.