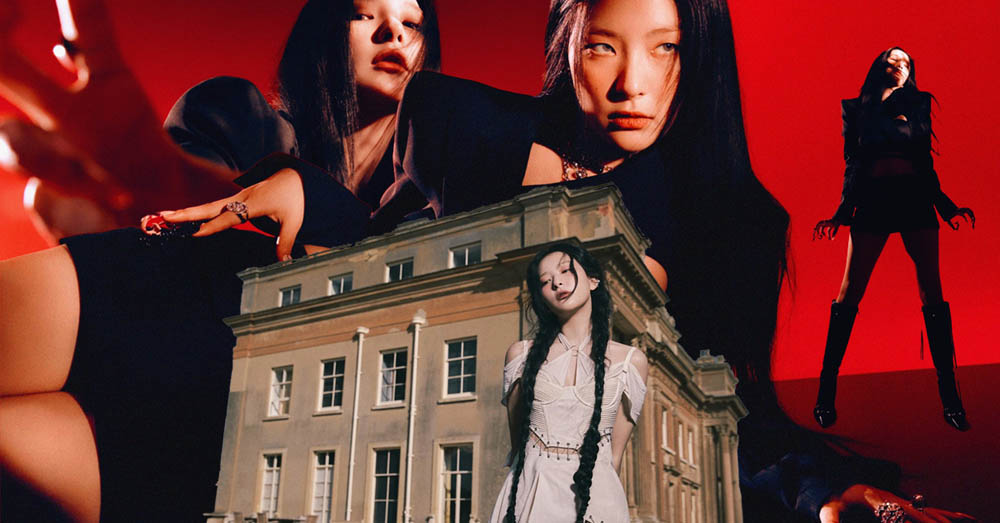 Following Wendy’s dreamy Like Water and Joy’s exuberant Hello, Seulgi takes center stage as the next member to fly solo. While we’ve seen her, for the most part with Red Velvet, a couple of subunits or as a featured artist, everyone knows Kang Seulgi is a well-rounded performer in a league of her own. She’s an impeccable artist, from the realm of the stage all the way down to visual arts.

When listicles and fans list down K-pop aces who deserve the title, her name never gets left out. Everyone recognizes Seulgi’s talent almost all the time, thanks to her star power and chameleonic abilities that let her transform into what the concept demands from her. Her sharp features, clean dance moves and silken voice make her an unforgettable name in the industry. But when we’ve gotten used to echoing the sentiment that Seulgi’s always been a well-rounded star, it almost feels automatic. So her debut EP, 28 Reasons, swoops in to remind everyone of her shining excellence that a single term cannot describe.

RELATED: Is Irene & Seulgi’s Monster the Classic Beauty Serve We All Needed?

The title track, 28 Reasons, overflows with a haunting elegance bolstered by string synths and Seulgi’s hypnotizing vocals. She plays the role of a temptress, seductively luring us into her trap, all decked in leather and chains. The choreography takes inspiration from none other than Marvel’s Scarlet Witch, with tricky hand movements adding to her mysterious persona. This song sets the mood for the rest of the EP, where R&B and pop instrumentals guide the exploration of good and evil. In an interview with Nylon, she shares that an offhanded statement became the guiding concept of the EP. “Good and evil people are not clearly distinguished,” she said in a meeting. “Good and evil coexist within one person.” Thus began the creation of 28 Reasons.

Seulgi manages to bounce back and forth between these personas throughout the mini-album while maintaining a veil of sensual sophistication and refinement. Every musical direction speaks for itself, as each genre explored in the tracks fits the mood perfectly. Whether it’s the thrill of new places in the glimmering EDM of Los Angeles, the dim city pop in the constrained Anywhere But Home or the quiet, synth-led dominance of Crown, Seulgi switches hats like a pro. Even in Bad Boy, Sad Girl, the sole song with a collaboration, explores two sides in a relationship. The sweeter R&B track has Seulgi assuming the position of a woman wronged. Meanwhile, Show Me The Money 10 alumni Be’O takes on the perspective of a misunderstood lover.

RELATED: “IM NAYEON,” A Bubbling Debut From One of K-Pop’s Biggest Stars

Seulgi also proves herself a promising writer and lyricist by penning Dead Man Runnin’. It chronicles the pain and emotional turbulence after a bad, lasting experience. In the song, she chases after the cause of her sorrows with anger, calling him a dead man running. However, rage manifests through the commanding strings and Seulgi’s powerful vocals. The anger bubbling in her isn’t blinding. Instead, it’s almost hysterical. It booms and it explodes, rendering her immobile, and she’s left to sing the pain out of her heart.

Perhaps her switching between “red” and “velvet” concepts for eight years trained her to know who to be at any given moment. But in this body of work, we see her exploring a human’s dichotomies, dualities and fluidity on her own terms while keeping things understated; elements of good and evil, black and white, appear side-by-side on the same muted plane. The intoxicating eeriness of her vocals slowly builds up to resounding bridges and choruses that hit the hardest at the climax. For others, this risk sets a record up to fail, but it works wonders for Seulgi’s 28 Reasons.

RELATED: Smile to Go In Araneta City Is Giving Fandoms a Safe Space in the Healthiest Way

All in all, 28 Reasons is a cohesive album that establishes Seulgi’s artistic capabilities, whether moving her body to each beat and string of the song or using her voice to embody an emotion. The world is her canvas, and Seulgi’s talents are her brush and paint. While we had the past eight years to admire her as an idol, 28 Reasons solidifies that she’s more than that.