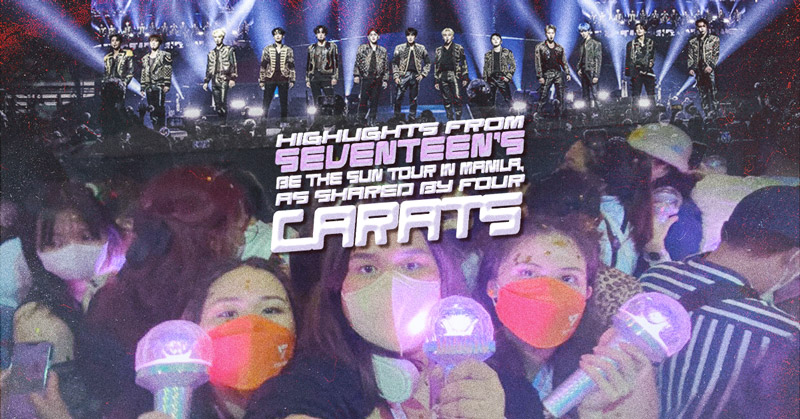 SEVENTEEN: The Best Moments You Missed at BE THE SUN

NGL, we had one hot weekend! While most would say it’s been a regular two-day pause, SEVENTEEN’s fandom—the CARATs—would beg to disagree. It wasn’t just another one of those thirty-four degree weekends in our lives; it was SEVENTEEN keeping the heat up for two consecutive nights with a fire set list at the MOA Arena.

The 13-member K-Pop boyband, SEVENTEEN, took their remarkable BE THE SUN WORLD TOUR to the Philippines from October 8-9, 2022. With the group’s Face the Sun album marking their seventh year in the music industry, Filipino CARATs had to celebrate by selling out the arena twice. The boys might as well believe they shared the stage with the crowd.

I’ve always found the number 17 lucky; it’s my safe answer whenever I’m asked to blurt out a random one. Back in 2015, 15-year-old me liked the idea of fate and fluke. I remember binge-watching K-pop music videos when I encountered Mansae and saw the group name, SEVENTEEN. I was hooked until my school notebook was filled with scribbles of my bias’s name (TMI: it’s Mingyu 💗) and amateur drawings of diamonds. I eventually slipped into the diamond life (as the boys would call it). I knew I couldn’t miss out on the haven their songs and energy would give me.

I saw SEVENTEEN during their first visit here with SEVENTEEN: Shining Diamonds in 2016, even captioning my Facebook album for it as the “highlight of my year.” Now, I’m well-aware that they’ve also become the highlight of more Filipino CARATs over the years. The Wonder team is here to prove it even more.

We asked four BE THE SUN goers to fill us in on the highlights you can’t miss.

Prior to the debut date of SEVENTEEN in 2015, Yara (21 y/o) had already been supporting the boyband by watching “SEVENTEEN Project: Big Debut Plan,” which was a reality show that tackled the members’ ups and downs in preparing for the K-pop world. The fresh BS Medical Technology graduate finds solace in the group, so she takes her chances of seeing them whenever they perform in Philippine concert halls. 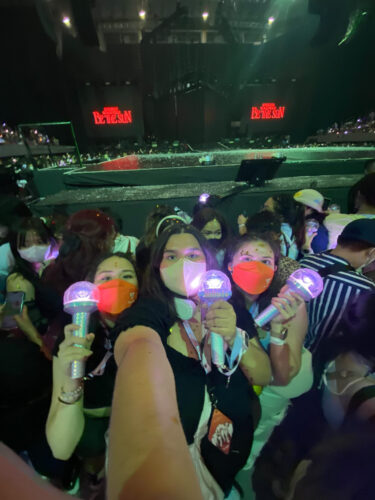 Kate, Yara and Jesi share a group selfie in front of the stage.

Wonder: What makes you support SEVENTEEN after all these years?

Yara: I just really connect to their songs and their energy. When I see them perform, it’s like I am in a different world where everything is blissful. You can also just see how much passion and love they put into their music, their fans and to each other. They are just a place that I would go to for comfort. Whenever I feel down or just need some extra love, I watch their videos and find exactly what I need.

W: What did you look forward to the most?

Y: To see the performances of the songs they released in the pandemic! [And] how they would react to the Philippine crowd again after so long; just seeing them in the flesh! [I was] so excited and also very nervous ‘cause I [hadn’t] seen them in so long. Sometimes, when I see them on screen, it feels like they aren’t real and are just a figment of my imagination.

W: From last Saturday’s concert, what were your favorite moments?

Yara also shares a video clip she personally took of S.Coups doing his notable Snap Shoot solo. (“Yes,” she confirms, “he literally grinded on the floor.”)

Pia (21 y/o) discovered SEVENTEEN when she needed a breath of fresh air last year. In the midst of intense studying and feeling the pressure to ace tests as a BS Accountancy student, she started listening to the boyband’s songs and found comfort in them. She also began getting to know the members through Going SEVENTEEN, the group’s variety show that became her source of happiness. 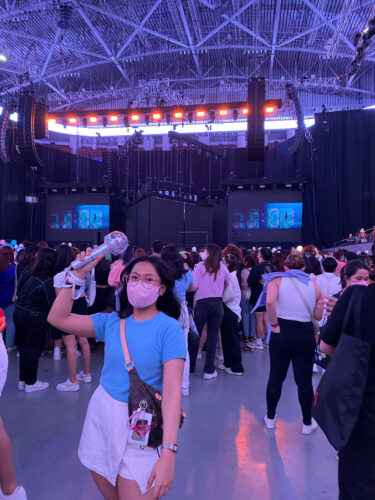 Pia proudly posing with her CARAT bong in hand.

Pia: [The] comfort and happiness—I don’t feel alone when I watch [them] or listen to them. They’re so talented din talaga, like amazing. [It’s] legit pala yung, “I don’t feel alone,” ‘cause as someone who doesn’t have much time to go out with friends, I feel their presence through their content and songs. I didn’t expect their impact on me.

W: Did you look forward to anything before D-day? If yes, what were they?

P: I was really looking forward to the chemistry between Filo CARATs and SEVENTEEN ‘cause I heard na it’s very different compared to other international CARATs. Another one is [that] I wanted to see the members’ playfulness live ‘cause they’re so kulit, ‘di ba? [You feel that] they’re brothers, so [ang] ganda ng chemistry nila. Since SEVENTEEN is my first K-pop concert, wala talaga ako masabi; [they] exceeded my expectations even more, knowing that their performances are excellent but they’re even better at a concert. I was [also] looking forward to hearing the songs live, [since] we know it’s very different from [hearing it through a] stream.

W: You mentioned their playfulness. What were your favorite moments about it from the two nights?

P: The (Jeongcheol and Seoksoo) ships were sailing! There was this part [during the] day two concert na they were playing with the auto tuned mic and sobrang kulit talaga ‘cause sobrang random ng mga kinakanta. During VERY NICE, DK’s voice was so high-pitched that it was scary! He was reaching random high notes until he suddenly belted out. They [also] made CARATs dance Snap Shoot last Sunday, then two others for AJU NICE. What’s cute [is] they really tried to learn some Filipino phrases like, “salamat po,” “mahal kita,” “gwapo ba ako,” “babalik kami.” Joshua even said, “sana all!” And, as usual, Hoshi with his horanghae cult.

For Ivesse (22 y/o), curiosity about the group’s wide discography is what eventually led her to support SEVENTEEN. Ever since she came across “Adore U,” she started seeing the consistency of the members in giving their all onstage through the years. “Don’t Wanna Cry” hooked her free (multi-stan) soul to be dedicated to SEVENTEEN in 2019.

Wonder: How did you feel when the concert was nearing?

Ivesse: I was so excited; I’ve never wanted to watch a concert this much, so I was very happy when I got to secure a ticket. I’ve also seen some of their past concert clips, which made me more eager to attend! I knew how powerful they’d perform and I wanted to witness it live. I didn’t make a mistake to stan these wonderful people—they were worth it until the end.

W: Since you’ve seen past concert clips, did you look forward to anything specific?

I: I was really looking forward to witnessing member-and-fan interactions. I wanted to hear the members ments! I was so excited to see the performance unit perform Moonwalker, [the] vocal unit to perform Imperfect Love and [the] hip-hop unit to perform GAM3 BO1. Imperfect Love is one of my favorite songs, [so that] added to the excitement. Honestly, when I found out about the set list, I was so happy because I loved the songs so much!

W: What are your favorite moments from last Sunday?

I: It’s been a tradition in the Philippines to have the loudest cheers for Dino, and I must say: the tradition lives. The crowd was so hyped and you could feel everyone enjoying [themselves]. It was also nice meeting [fellow] CARATs; it felt like everyone was close, so it wasn’t awkward even if I came alone. The ments were a highlight and it felt really nice to have some members give an effort to learn the language. All the “mahal ko kayo’s” were overflowing. Woozi’s “masaya ako” hit the hardest. Them wanting to come back and saying it tons of times made us feel that they indeed enjoyed [it] as well. Dino’s Snap Shoot part when the crowd started to rap it out loud was so overwhelming!

Carla (22 y/o) was familiar with SEVENTEEN even before she got to know them in 2017. Currently in medical school, SEVENTEEN has become her rest. There’s fondness at the memory of her and her sister watching random K-pop music videos until “Don’t Wanna Cry” played; she’s been head-over-heels with the group since. 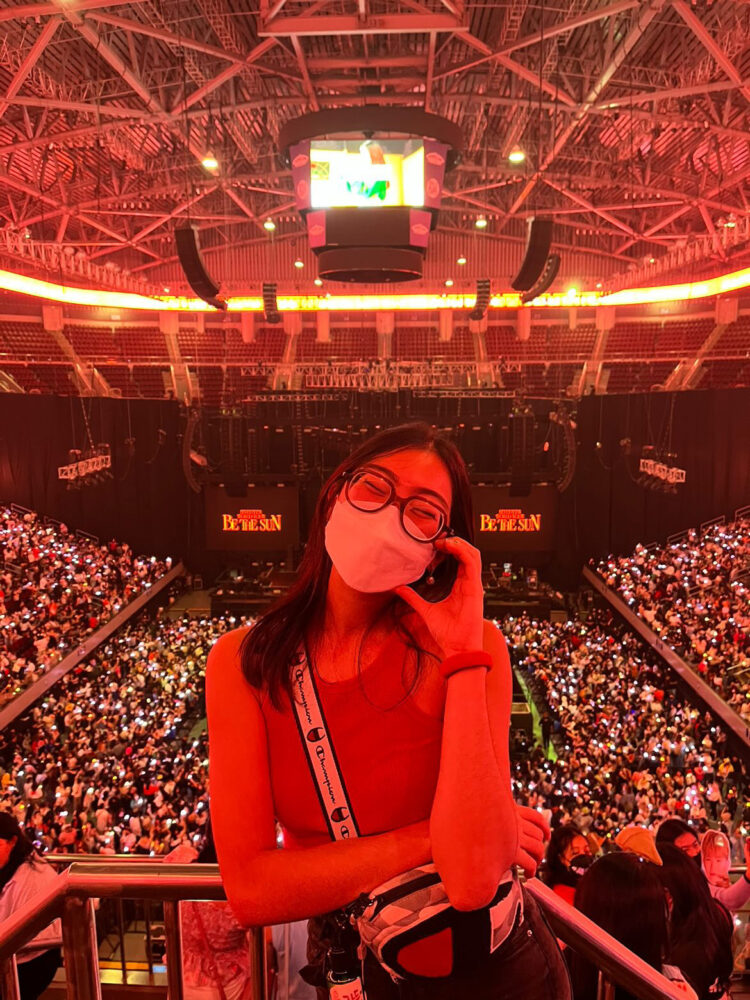 Carla snaps a photo with a cheek heart upon seeing SEVENTEEN.

Wonder: What makes you support SEVENTEEN after all these years?

Carla: I would say [it’s] the overall sincerity of SEVENTEEN; the way they care for CARATs. I feel like it’s so genuine and full of gratitude and love.

W: Did you look forward to anything before D-day? If yes, what were they?

C: I actually attended the IDEAL CUT concert in 2018, so it’s my second SEVENTEEN concert! Honestly, that was the week of my preliminary examinations and the concert was really the only thing I was looking forward to.

W: What are your favorite moments from last Sunday?

C: I enjoyed the entire concert! Choosing my favorite moments would be tough, but I would say any part where my bias is shown on the big screen is my favorite! He’s Jun, so you could say during Moonwalker and Wave. Ah, I went crazy! Another favorite part [of mine] would be when the members were trying out the auto tuned microphone! They’re just so funny and, hay, I just love them. Lastly, the never ending AJU NICE! To jump with them in a sea of CARAT bongs was so cool—it felt like a club! They were really caring [too]. They kept reminding us to be careful and, if we got hurt, Seungcheol (S.Coups) would get sad. I love them!

seungkwan being the aju nice police bc our section was only taking vids and not jumping 🤣 after that he told the whole crowd that the length of their encore depends on how much we jumped 😭#BeTheSuninManila #BeTSinMANILA #SEUNGKWAN pic.twitter.com/JDTQRMIbCY

if you guys get hurt, coups will get hurt as well — hoshi 🥺🥺 pic.twitter.com/WylJKst7pN

Do you have any favorite moments with SEVENTEEN? Let us know in the comments!