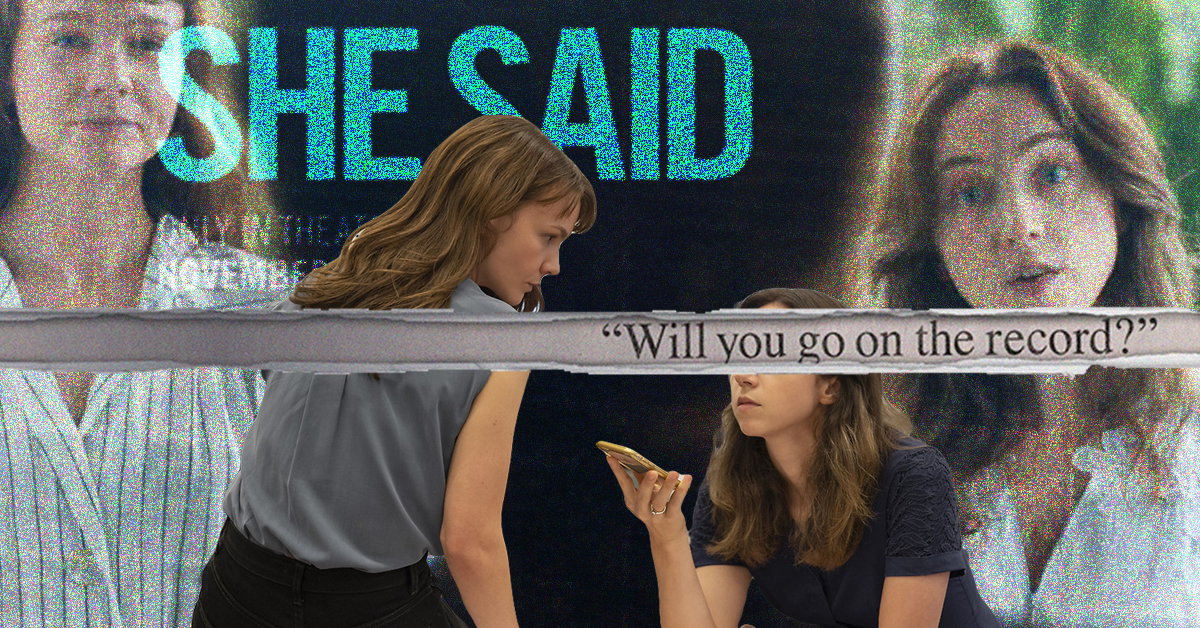 She said, he said

I knew walking into the theater that She Said would be a difficult watch. All anyone really needs to know from the synopsis to get an inkling of just how difficult the conversation this film strives to encapsulate is this: Harvey Weinstein and the #MeToo movement.

You remember the one; it wasn’t too long ago when it happened. In 2017, a New York Times article exposed Harvey Weinstein and his “ways” with various Hollywood personalities. The curtains were lifted from his decades-long career: young actresses who didn’t know any better, secretaries who were told it was all part of the job. And behind that piece, straightforwardly titled Harvey Weinstein Paid Off Sexual Harassment Accusers For Decades, were journalists Jodi Kantor and Megan Twohey.

Jodi Kantor and Megan Twohey were two of the women behind the movement. Kantor received a tip that Rose McGowan was assaulted by Weinstein. McGowan declined to comment at first, later reaching out to Kantor to recall a time when she was raped by the Oscar-winning producer when she was only 23. Kantor then reached out to Ashely Judd and Gwyneth Paltrow, both of whom had their own unwanted sexual encounters with Weinstein.

The problem wasn’t in that there was no story or reliable sources. Kantor’s issue was that the women didn’t want their names attached to the article; they feared for their careers.

With nowhere else to go and no one else to approach, Kantor asks Twohey to help. Twohey finds Weinstein’s previous assistant at Miramax, and while she wanted to speak she could not because of a signed non-disclosure agreement. There are three others—Rowena Chiu, Zelda Perkins and Laura Madden—who speak, but speak off the record. Their names can’t be published, either.

We meet the CFO of Miramax, who refuses to discuss the matter either, particularly about potential payoffs of former employees (read: hush money). The Equal Employment Opportunity Commission refuses to give any information on the payouts, too. Even the district attorney’s office can’t talk about the charges that are dropped as quickly as they come in, because Weinstein has an in there, too.

There are no spoilers here, because we know what happened: Ashley Judd and Laura Madden went on the record. It was a she said, he said battle, and the shes won.

RELATED: Claudia Barretto Is Not Your Victim

Typing it out, She Said sounds like your typical based-on-real-events film. Like something as straightforward as a YouTube video about the events that took place in 2017 and in the years that led up to it. But the film is so much more than that.

If you’ve been sexually harassed or assaulted write ‘me too’ as a reply to this tweet. pic.twitter.com/k2oeCiUf9n

She Said wouldn’t have been as maddening if the victims’ stories didn’t just rip out your heart. To hear anyone—a stranger, a sister, a mother—retell a moment of their lives when they felt that silence and acceptance of their rape was a better option than speaking up, when keeping quiet would do them better than speaking up is fucking maddening. It’s insane. But it’s the kind of insane that you understand because it’s likely happened to you. (The circumstances might not have been exactly the same, but you’re thinking about it now, aren’t you?)

She Said wouldn’t have been as frustrating if Harvey Weinstein acted alone. If his victims were paid off with personally-written checks and personally-drafted NDAs, then I wouldn’t be writing an entire paragraph about it. But the thing is that he wasn’t; he had a whole damn team doing his dirty work for him. He had lawyers who spoke to victims, government officials who would throw away any case records against him. He had protectors. (Imagine that for a little white longer. Read it again: the rapist had protectors.)

And She Said wouldn’t have been as moving if things came easy for Kantor and Twohey. But they did their own research, they fought for their story and they did the damn work. They listened to narratives that were painful for the victims to recall and were heartbreaking to hear. They stood up to a machine so big that it had silenced dozens of women for dozens of years. They empowered and supported and respected victims enough until they were finally, finally willing to lead the movement.

Maybe Kantor and Twohey’s journey to discovering and writing that piece was a matter of perfect timing. Maybe it happened because Judd and Madden were simply ready—but that isn’t the point. The point is that #MeToo and She Said isn’t about timeliness and trends. They are two things that shouldn’t die just because you don’t see it trending on Twitter.

Basically, what I’m saying is this: Watch She Said and make it an annual watch. And when it finally isn’t maddening or frustrating or both, then we can finally say we’ve evolved as a people.