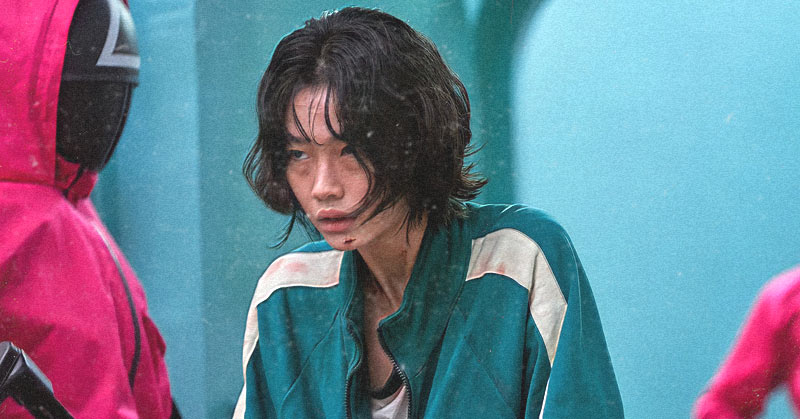 The escape we got is scarier than reality

You’ve seen the memes, the Tweets and the reactions over the weekend about Squid Game. Some might call it overhyped or overrated, but let its 100-point score on Rotten Tomatoes and its title of Netflix’s highest-rated Korean series speak for the series: Squid Game is worth your time. It’s theatrically shot coupled with a compelling storyline, a unique piece of work from director Hwang Dong-hyuk. The series is easily up there with Sweet Home and Kingdom.

The nine-episode Netflix original will leave you unsettled with the number of twists, turns and gore. It’s as graphic and gruesome as Battle Royale, Alice In Borderland and As The God’s Will. But instead of battling it out in a matter of life and death in a dingy place, the players do it in one pastel-colored nightmare. Squid Game turns nostalgia into a disturbing escape, with rooms looking like playgrounds plucked from nursery rhymes and children’s games determining the characters’ fates. It’s this very premise that makes it attractive and unique.

In summary, people swimming in debt get invited to play a series of games for a massive sum of money (we’re talking billions). A new chance at life awaits them at the end of the high-stakes competition. But the moment they start their first round, losing individuals are literally eliminated (read: shot to death). They all realize that the journey to the prize of 45.6 billion Korean Won isn’t as easy as it seems—each end to a game is a childhood nightmare that will haunt you ‘til the end.

We discover that South Korea’s ultra-rich organized the game for their entertainment. The players are perceived as horses bet on in a race or pawns on a chessboard. That’s why they identify the participants with numbers instead of their names, effectively dehumanizing these individuals. But as Squid Game consistently plays with opposites and contrasts, such as graphic violence in a happy-looking playground, the plot masterfully humanizes each character with rich backstories that strike a chord in all of us.

Seong Gi-hun (Lee Jung-jae) is a chauffeur who needs to pay for his diabetic mother’s surgery. Cho Sang-woo (Park Hae-soo), a former investment banker, is wanted for embezzlement and theft. Meanwhile, Kang Sae-byeok (Jung Ho-yeon) is a North Korean defector looking to pay for a broker to help her family escape to South Korea. The rest of the characters’ real lives are equally harsh, giving us clues as to why they ended up competing for the prize money and why they’re willing to do what it takes to win the gold. For them, the reality is either an endless chase with loan sharks or a do-or-die game of Red Light, Green Light (or in Filipino, Pepsi-7Up) in exchange for fortune.

RELATED: From Family Man to Vigilante, Nobody is Bob Odenkirk’s Finest Work

Each character is three-dimensional and jarringly human. Despite being forced to turn against each other, (select) players showed trust, compassion and empathy as they tried to complete all games. Alliances are forged and broken. Because underneath the spectacle, violence and theatrics are humans who feel pity, guilt and greed. But with so much at stake, they’ll do anything—kill, betray, deceive each other—to win.

Squid Game has this to say: our lives are affected by choices, no matter how big or small. All the players find themselves in the twisted game because of a series of decisions they made themselves, the game masters and the people they’ve interacted with. We’re reminded that kindness goes a long way while karma will come swinging right around. There’s no way to reverse what happened in the past. Instead, we need to learn to deal with the consequences and make decisions that count.

So, what will you do with the cards you were dealt with?

Stream all episodes of Squid Game on Netflix.