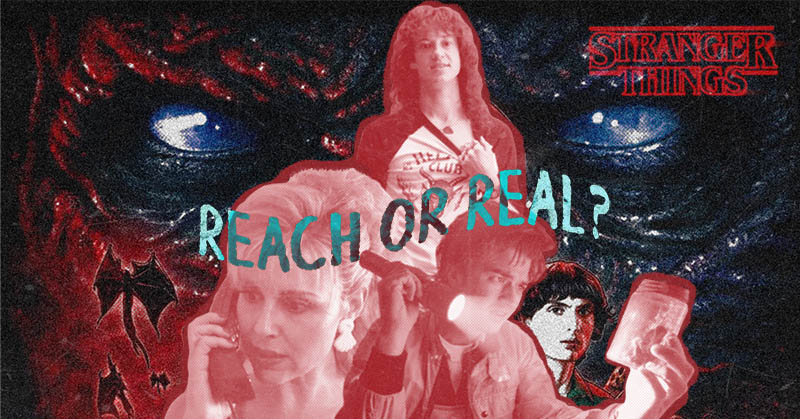 Is Eddie Munson really a survivor from…?

As we count down the days to Stranger Things 4 Volume Two, fan theories appear on our timelines and For You pages. Everyone’s busy guessing the next big thing, especially with episode seven ending with a dazed Nancy Wheeler in the process of getting Vecna-ed™. This gives everyone a recap on Vecna/001/Henry Creel’s past and his inevitable connection to Eleven and the rest of the Upside Down. But as Dr. Sam Owens said, a war is brewing in Hawkins, and the remaining gang is in the eye of the storm.

While we wait to uncover the rest of the plot, let’s check out some popular fan theories and see if these fall under “reach” or “real.”

“Alice Creel grew up to be Karen Wheeler”

We all love Karen Wheeler (questionable chemistry with Billy aside). But upon noticing the poster carousels for Stranger Things 4, everyone saw that the only Hawkins parent present is Karen Wheeler. No Ted Wheeler, no Mrs. Henderson or Mr. and Mrs. Sinclair. What could be Karen’s big role in volume two that warrants her own portrait? Other fans zeroed in on the silhouette of the Creel house at the bottom of the poster. The detail made them believe that Karen Wheeler is Alice Creel, Henry’s (or Vecna’s) sister, who supposedly survived the attack. Aside from the house and connection, some point out Karen uncannily looks like Virginia.

I hate to break it to you guys, but did we watch the same series? Authorities found both Virginia, the mother, and Alice dead on the floor. Henry and Victor were the lone survivors, with the former becoming Dr. Brenner’s first test subject and the latter staying in Penhurst Asylum. I don’t doubt Karen’s upcoming significant contribution to the plot, but I’d like to think it isn’t through the Creels.

RELATED: Ranking Stranger Things’ Best Songs and the Scenes They Appeared In

“Eddie Munson is 010, the test subject Dr. Brenner taught in episode one”

In season four’s first episode, Eddie and Chrissy reminisced about middle school while doing their shady transaction. The metalhead described his appearance with a buzzed head, sounding everyone’s theory alarms. While Brenner’s subjects had their heads buzzed, it’s not entirely a hairstyle limited to them. Another piece of evidence that supports that lies in Eddie’s non-reaction to the Hawkins Gang’s mention of Eleven, a girl with telekinetic powers. Fans think this suggests that Eddie has some idea of what goes on—mainly because he, too, has the powers, experienced that trauma and continues to repress it. No one knows if 010 survives, given that his face remained hidden as Brenner cradled his body.

However, 010 in the first episode looks old enough to be in middle school. So it would take Eddie-010 a few more years to integrate into society as if he belonged there. (Hello, look at Eleven?) So this theory leans more towards highly unlikely, given that he’d struggle to integrate into regular middle school ASAP. Maybe Eddie, just like Max and Bob, got roped into this mess. (But we’re not quite sure if he stays.)

“Ms. Kelley is someone from the Upside Down”

After much snooping and sleuthing, the Hawkins gang discovered that many of Vecna’s victims sought the help of their guidance counselor, Ms. Kelley. From Chrissy’s troubled past, Fred’s heavy guilt, Patrick’s family history and Max’s trauma, their common string lies in Ms. Kelley. Remember that all these victims would hear and see grandfather clocks ticking? When Ms. Kelley sat down with Max in her house, her necklace had a clock-and-key pendant. This made people believe that she has a more significant role for the Upside Down, the Mind Flayer and Vecna.

But many forget that Nancy also fell under Vecna’s curse. Unfortunately, nothing in the show alludes that she has sessions with Ms. Kelley, so that could be another reach. So we’re yet to see if that’s due to exploring Upside Down or an intention on the villain’s end.

RELATED: All Of Us Are Dead Will Get A Second Season On Netflix

“Vecna/001 has been in the show all this time. He even possessed Billy in season three!”

In the season three episode called The Case of the Missing Lifeguard, Max and Eleven storm to Heather Holloway’s house and interrupt a family dinner. A seemingly kind and gentle Billy appears before them, but El has a burgeoning hunch that something else has taken over the teenager. Billy’s body language and speech appear different when interacting with the two girls. He comes off as less aggressive and maybe even a little gentle. Nonetheless, he looks like he knows more than he lets on. Fast forward to Stranger Things 4, where 001’s gentle façade and proper demeanor mirror Billy’s from that earlier night. This tidbit led people to believe that Vecna actually possessed him, and he’s the Upside Down’s supreme being instead of the Mind Flayer.

I’m not an expert in body language, but that *could* just be the two keeping up appearances. Whether it’s a hint or a coincidence, we’ll know on July 1st.

“Eddie Munson, Steve Harrington or Mike Wheeler will die at the end of volume two”

Learning from Barb’s, Bob’s, Alexei’s and Billy’s deaths, we can all agree that Stranger Things have a habit of killing off newly-introduced characters at the end of each season. If the Duffer brothers do follow this formula, we can assume that season four might take a new character from us. They already took Chrissy way too early. All arrows point to Eddie, the outcast metalhead that won the hearts of many. But another theory comes into play when considering the Volume Two trailer.

Based on lip reading, spliced quotes, plus the creators’ hints, the Stranger Things 4 deaths will hurt. So we’ll likely witness the loss of a well-loved new character or an iconic leading cast member. The babysitter, the asshole-turned-sweet-dork and the one shaping up to become Nancy’s new beau (sorry, Jonathan!)—losing Steve will hurt. I’m also throwing the possibility of losing Mike Wheeler, too. What else can motivate Eleven to fully realize her powers than the fact of losing the love of her life? Plot devices, we love to hate them.

Rating: Real—just not too sure who it should be.

RELATED: Director Todd Phillips Confirms ‘Joker 2’ Is In The Works

We’re on the last stretch to the beginning of the end. Hold on to your seats and set your reminders!

Volume Two of Stranger Things 4 drops on Netflix this July 1.