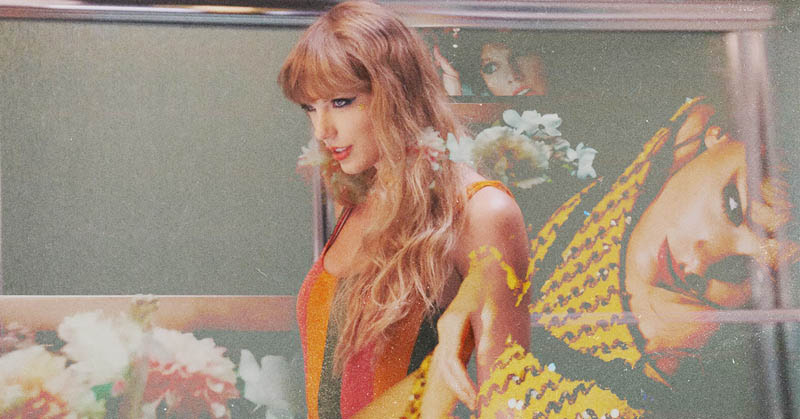 Midnights always get the best of us. We’re captive to thoughts we do our best to push away in the day—brazen truths and crooked lies we allow ourselves to believe as we lull ourselves to sleep. It’s a universal truth: Come midnight, we abandon our pursuit for perfection, weep for our losses and yearn for lives we do not live. Whether we’re alone or accompanied by warm bodies that give us a (false) sense of security, we’re humbled by the reality that maybe, just maybe, we don’t have control after all.

Taylor Swift, the multi-award-winning singer-songwriter, master storyteller and purveyor of all things 13, is no different from the rest of us. She, too, is bound by this time of day—but in her case, it makes for some pretty great music. After her alternative pop-folk debut with Folklore and Evermore that popularized “cottagecore,” we see her highly-anticipated return to pop—the kind that crushes your heart and makes you revisit long-forgotten feelings.

Midnights, the most-streamed album in a single day in Spotify history, is Taylor’s 10th original studio album exploring “13 sleepless nights scattered throughout my life.” With 70s-inspired  sepia-toned visuals, it calls to mind her very own musical inspirations, namely Joni Mitchell and Carole King.

After almost a decade of making music together, Jack Antonoff (Bleachers) takes the lead as Taylor’s co-pilot. In an Instagram post, she reveals, “Jack and I found ourselves back in New York, alone, recording every night, staying up late and exploring old memories and midnights past.” Other notable collaborators include the likes of Lana del Rey, Zoë Kravitz and, of course, William Bowery (Taylor’s beau, Joe Alwyn’s songwriting pseudonym).

Described as a “collage of intensity, highs and lows, and ebbs and flows,” Midnights is an album, yet again, akin to a diary of a woman scorned and loved. Here, Taylor Swift reclaims the title of Queen of Pop, as the country-to-pop crossover star unapologetically embraces her roots. With an additional seven singles she calls “3AM tracks,” these are “other songs we wrote on our journey to find that magic 13.”

The Atlantic’s Spencer Kornhaber encapsulates Midnights best in his review: “The album treads aggressively familiar territory—but with new wisdom and confidence.” Taylor masterly references previous albums and states to make way for the present and the future.

Here are stand-out singles from Midnights we’ve grown to love in no particular order (and how the young’uns say nowadays, “just for vibes”):

The lead single to Midnights exposes Taylor’s “nightmare scenarios and intrusive thoughts.” These are wretched insecurities, which if we’re being honest, on some level we can all relate to. She writes, “This song really is a real guided tour throughout all the things I tend to hate about myself. We all hate things about ourselves.”

It’s giving self-sabotaging queen (along with Vigilante Shit), reminiscent of her Reputation era. Who calls themselves a narcissist? Apparently, Taylor does. We’ve all got anti-heroic traits as our “depression works the graveyard shift” that, at some point, we have to hold ourselves accountable to.

Read this again: Sometimes, you’re the toxic one.

There’s something to be said when a lover is “quiet quitting” on your relationship—simply doing the bare minimum and slowly fading without having the actual break-up conversation. Bejeweled displays Taylor’s frustration with a partner who no longer gives her the enchanting treatment she deserves, but rediscovers her self-worth in the process.

The music video, directed by Taylor, is a “twist on a fairytale we all know.” It features Taylor’s besties, the Haim sisters, and Laura Dern as antagonists. She also gets striptease lessons from the one and only Dita Von Teese.

Labyrinth joins the ranks of Clean (1989) and Begin Again (Red) as anthems for moving forward and finding new love. “Breathe in, breathe through, breathe deep, breathe out” are lyrics from the song, which she quoted, too, in her NYU commencement speech in May. (Ah, give it up for the queen of Easter eggs!)

Taylor revealed how she discovered the phrase “Lavender Haze” while watching an episode of Mad Men, describing a character’s lovestruck demeanor while talking about his soon-to-be wife. Her six-year relationship with actor Joe Alwyn has been picked apart by the public, almost as if wanting it to fail. She references her desire to actively be in that “hazy” state regardless of people’s desperate need to weigh in on her relationship.

Poking fun at all the jokes people have thrown at her throughout the years, specifically calling her a “serial dater” (I mean, who isn’t?), Karma has become her boyfriend. During an interview with New Music Daily on Apple Music, Swift reveals that the song was written from “a perspective of feeling really happy, really proud of the way your life is, feeling like this must be a reward for doing stuff right.” We love an unbothered queen!

Midnights cements Taylor Swift as one of the industry’s—cutthroat as it is—greatest lyricists and performers of all time. While we have our most intrusive thoughts during the time of the day, at least we have her bejeweled vocals to accompany us.