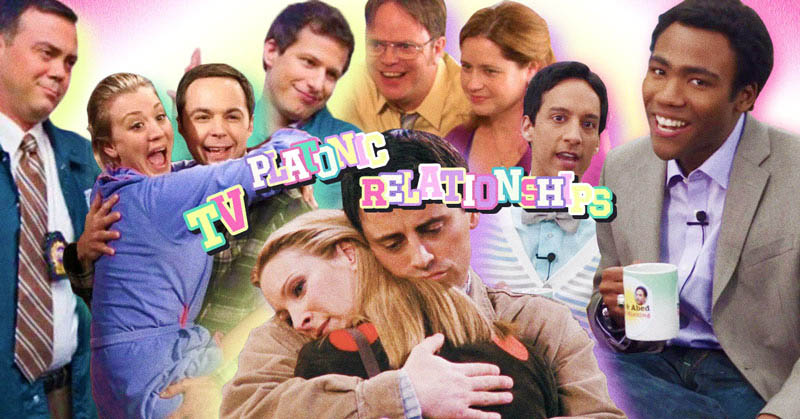 These TV shows have made great points

While TV shows continue to bring us an abundance of love teams and ships that impact pop culture, platonic tandems also carry our favorite titles on their backs. They may be supporting characters providing some much-needed advice to our leads, or were written in to add a ton of flavor and comedic relief to each scene. Either way, an episode can never be complete without them. So without further ado, let me present Team Wonder’s favorite (fictional) platonic relationships that keep us glued to our screens.

One of the first platonic relationships we’d like to feature comes from Community. Troy (Donald Glover) and Abed (Danny Pudi) may seem like your typical dumb and dumber duo, but they’re definitely more than that. Troy and Abed encourage their child-like imaginations, even if it leads to the wildest shenanigans. Sometimes the cast can be wildly disturbed with how close these two are but end up getting roped into their odd ideas in the end. After all, where can you find someone who’ll do both Troy and Abed in the Morning and Troy and Abed in the Morning: Nights with you?

Pam (Jenna Fischer) and Dwight (Rainn Wilson) first appeared as civil co-workers in the early days of The Office. Add in Pam’s closeness to Dwight’s arch-nemesis, Jim Halpert (John Krasinski), and it is safe to say that the two were unlikely to get along. But unknowingly, they forge a close friendship. Case in point: Pam helps out a concussed Dwight, while Dwight comforts a heartbroken Pam. Their relationship is so pure that he puts aside his dislike for Jim, even helping them start anew in a different state.

Phoebe (Lisa Kudrow) and Joey (Matt LeBlanc) might just be two of the most entertaining characters on Friends. Mix Phoebe’s kookiness with Joey’s chaotic personality and you get the best banter ever. The French lessons! The guitar lessons! All the random—almost TMI—stories they share! But when push comes to shove, these two have each other’s backs—yes, even teaming up to bug a Las Vegas casino dealer for another acting opportunity.

RELATED: Can A Polyamorous Relationship Work? We Hear Straight from These Polyamorous Couples

One of the reasons why Brooklyn Nine-Nine cemented itself as an iconic sitcom of the late 2010s is its ability to bring forth unique platonic relationships. Our favorite? The one between Jake (Andy Samberg) and Charles (Joe Lo Truglio). The two are absolutely loyal and even ride along with each other’s wildest schemes, such as roleplaying to solve a case or doing undercover missions. Plus, after ten years in the NYPD and Jake getting thrown into jail, these two are still inseparable.

As much as Sheldon (Jimm Parsons) and Penny (Kaley Cuoco) perfectly embody the definition of total opposites, fans love pointing out their pure—and underrated—friendship. Sheltered Sheldon finds solace in Penny (and by extension, Leonard), whether he’s sick, overwhelmed or just being the typical Sheldon he is. In turn, Sheldon tries to extend affection by taking care of her in ways he can. There are no hidden agendas, no expectations; just the best kind of give-and-take you can get out of a platonic relationship.

While the differences between them never really quite settled, Lady Mary Crawley (Laura Carmichel) and Tom Branson (Allen Leech)  eventually found a way—not just to tolerate but—to appreciate each other. No one respected Tom’s opinions as much as Mary; and no one looked out for Mary the way that Tom did. They always had each other’s best interest at heart, without needing to shy away from a good debate. These make them the best sort of frenemies.

Did we miss other TV friendships on this list? Sound off in the comments below! Lastly, we bring you the latest titles to check out for your viewing pleasure.