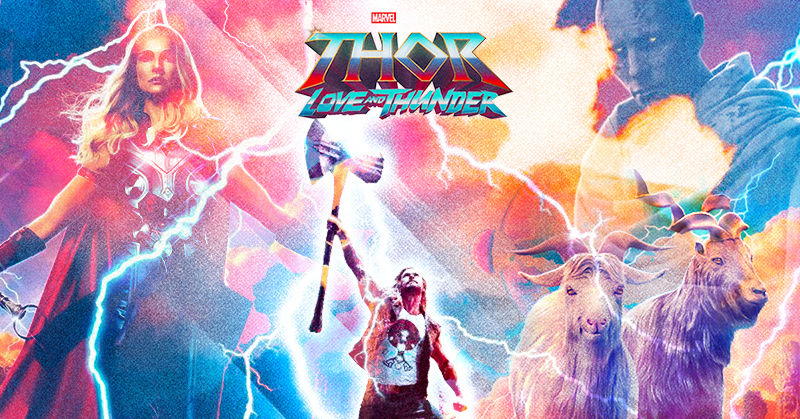 “Thor: Love and Thunder” Is Gorgeous, Godly and Goofy

Disclaimer: this review of “Thor: Love and Thunder” contains spoilers

Superhero movies aren’t my cup of tea. Don’t get me wrong—I lost it when the crossover scene from Spider-Man: No Way Home happened, and I thoroughly enjoyed the freakiness of Doctor Strange in the Multiverse of Madness. But outside those films, I found many Marvel heroes and their standalone movies boring. Maybe it’s the always-serious vibe, the pressure to remain loyal to the comics and whatnot or the copious amounts of action that feels more repetitive than engaging. So when I went to the cinema to watch Thor: Love and Thunder, I didn’t expect that I’d exit the screening tired from all the laughing. Props to Taika Waititi and co-writer Jennifer Robinson (Someone Great) for going above and beyond in flexing their comedic muscle, because this movie won me over as a newly minted MCU fan.

As far as the plot is concerned, Thor (Chris Hemsworth) gets pulled from retirement when Gorr the God Butcher (Christian Bale) carries on his vow: to facilitate the extinction of gods. To stop Gorr’s crimes, Thor returns to New Asgard to recruit the help of King Valkyrie (Tessa Thompson), Korg (Taika Waititi) and a surprising new hero: his ex-girlfriend, Jane Foster-slash-The-Mighty-Thor (Natalie Portman). (Did we mention that Mjolnir is up and working again?) The group traverses different worlds, encounters different kinds of gods and tries to foil Gorr the God Butcher, whatever it takes.

RELATED: “Lightyear” Hits Harder Than I Thought It Would

Overall, Thor: Love and Thunder can only be described as gorgeous, godly and goofy.

Technicalities-wise, I could barely see any fault in the film. While, sure, Tessa Thompson and Taika Waititi poked fun at some minor editing mistakes in Vanity Fair, the general treatment of the movie could only be described as jaw-dropping. A personal favorite would be the scenes in Gorr’s Shadow Realm, a world where everything is in chrome-esque black and white. The only color you’ll see comes from the energy the gods emit in battle. Also, how can we forget the amazing greenery of New Zealand and the Rainbow Beams of Stormbreaker?

Of course, a special shoutout to the cast: Chris Hemsworth, Tessa Thompson and Natalie Portman. Watching the three of them throughout the film was an honor I barely deserved. The casting has always been top-tier, and Thor: Love and Thunder plays this to a tee. Thank you, really. Thank you.

RELATED: Keanu Reeves Talks with Marvel, Says He “Gotta Find Something” To Do in the MCU

In this movie, Marvel confirms the existence of a Greek God in that timeline: Zeus (Russell Crowe). Thor, King Valkyrie and Jane set out to build an army of gods to stop Gorr and find themselves seeking the help of Zeus. Yes, the Greek God with A Dad Bod™, as his lightning bolt proves a powerful weapon. After all, when a battle of divine proportions comes, it’s evident that you need the strongest god in the land to help you out. Zeus appears in the movie in character, where the first agenda of his meeting in the city is organizing the gods’ orgy. Nothing like mentioning Zeus’s favorite hobbies, right?

But the easter egg highly appreciated in the Omnipotence City sequence is the selection of different gods. Yes, including one from Māori folklore, which serves as one of the many Kiwi touches from Taika Waititi himself. The references even brought a Kiwi TikToker to tears—citing representation long overdue.

Honestly, the film keeps giving its viewers whiplash as it shifts from unbelievably funny and harrowingly real to extremely wholesome. Perhaps this is what makes the humor a perfect fit. It highlights the small joys, tongue-in-cheek exchanges and the spontaneity of companionship.

Taika Waititi shows the world that superhero movies can be comedic and that the battle for the greater good can be a bit fun. Sometimes, motivations need not revolve around vengeance, pride and retribution. It could also come from a place of love—maybe because everything they do is a product of love.