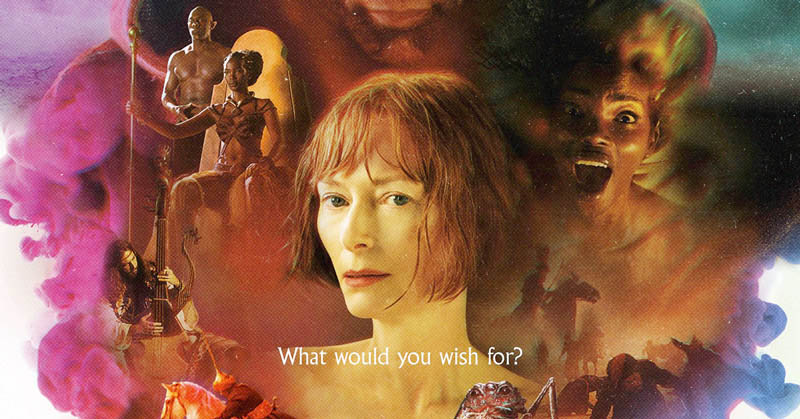 Three Thousand Years of Longing Will Leave You Wanting More

A short scroll through Twitter’s search fields would tell you that Three Thousand Years of Longing is an ode to stories and storytellers. A rich world of fantasy that’s a far cry from director George Miller’s portfolio that includes the Mad Max franchise, Happy Feet and Babe: Pig in the City. The movie, written by Miller and Augusta Gore, is adapted from the short story by A. S. Byatt, The Djinn in the Nightingale’s Eye.

Three Thousand Years of Longing follows narratologist Alithea Binnie (Tilda Swinton) as she travels to Istanbul for a conference. As she shops for a souvenir to remember her travel, the academic comes across an alluring glass bottle that ultimately releases a Djinn (Idris Elba). The Djinn then offers to grant Alithea three wishes in exchange for his freedom. But knowing the cautionary tale of genies, djinns and wishes, the narratologist remains skeptical. This pushes Djinn to tell her his stories to plead his case, which leads to a surprising ending.

If we’re talking about skills, Academy Award-winning Tilda Swinton masters Alithea’s stilted academic persona: distant but courteous, cynical but curious. But, of course, her walls were slowly torn down by Djinn’s passionate stories before giving way to her heart’s desire. Meanwhile, Idris Elba’s Djinn has a certain kind of magnetism only he can pull off, exuding the wisdom of an age-old being. Their chemistry is unmistakable, something that slowly builds up as the two get more frustrated with each tale uncovered. (But tbh, I, too, would risk it all of Idris Elba—whether it’s his Djinn or human form!)

Three Thousand Years of Longing still has Miller’s flair for the dramatics, making the film a fairytale for adults. Modern movies often use CGI to clean up spots and execute ideas that production can’t do IRL. Yet this film utilizes computer tricks as tools for storytelling, creating grandiose worlds that add to the charming allure of Djinn’s stories. The presentation of worlds is perfect, despite each story’s imperfections leading to their demise.

Stories about mischievous, mystical wish-granting beings often center the adventure on the protagonist fighting the flames that their desires leave in their wake. From the Hebrew Queen of Sheba, the Ottoman Empire up until 19th-century Turkiye, Djinn has answered to multiple people and granted their wishes. But unfortunately, all of the people he hoped to free him fumbled with their own selfishness and deepest desires. With Alithea slowly warming up to ask Djinn for something, Three Thousand Years of Longing teaches us that even the most careful wishes have repercussions.

A post shared by Three Thousand Years Of Longing (@3000yearsmovie)

After a wild ride through glamorous, historical worlds, the ending falls flat. One would think that Alithea’s story with Djinn would be the same caliber as those who’ve gone before her. Instead, Three Thousand Years of Longing closes its chapter in modern times: an era seemingly less magical than before. Instead, we get an anti-climactic close to Djinn’s fate that initially relied on human decisions. Alithea, at least, made a difference that gave him peace.

But that realistic ending leaves us asking for more. Perhaps it was deliberate for the movie to take such a direction on Miller’s part. So while we’ve enjoyed Djinn’s adventures, it’s time for his longing to end, finally.