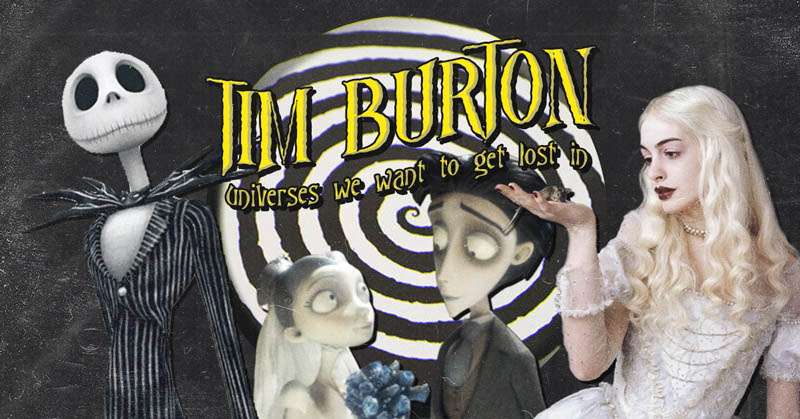 If We Could, We Would: Tim Burton Universes We Want To Get Lost In

Everyone has grown up watching Tim Burton. From the wackiness of Beetlejuice (1988) to the somewhat traumatizing Charlie and The Chocolate Factory (2005), a generation has grown up with the man’s excellent works. Marathoned not just on Halloween but even beyond, Tim Burton has managed to create a name for himself, especially as the father of gothic horror and fantasy narratives. And maybe even the director with the most movies starring both Helena Bonham Carter and Johnny Depp. TL;DR: he’s the man.

The director, writer, producer and puppeteer recently made rounds for his remarks uttered at the Lumière Festival in Lyon, France. According to Deadline, Tim Burton sees that occasional projects might find a place in Disney, but the studio focuses on franchises like Marvel and Star Wars. “It’s gotten to be very homogenized, very consolidated. There’s less room for different types of things,” he shares, mentioning that he would never do a Marvel movie. “I can only deal with one universe, I can’t deal with a multi-universe.”

Well, we can’t fault the man there. The worlds he built in this works are already marvels in themselves (pun not intended), so why push to tie them all together? While easter eggs and crossovers are highly appreciated, we still love a good old universe to get lost in. Sometimes, these places seem better than the world we’re in. Up ahead, we revisit some of Tim Burton’s best works and their equally enthralling settings.

What happens when the dead gets haunted by the living? Well, you call Betelgeuse and probably get more than you bargained for. In this overlap of the afterlife and the real world, this bio-exorcist’s powers might be hell for those used against, but is an absolute joy for the spectators. After all, he will pull out all the stops to spook you. But another option also exists, which is a harmonious and joyful time with the Maitlands.

RELATED: Since They’re All Doing It Anyway: Horror Movie Reboots We Probably Need

The Nightmare Before Christmas (1993)

Written and produced by Tim Burton, this stop-motion movie perhaps is one of his most iconic works. Maybe it’s due to the perfect combination of freaky and innocent, macabre and childlike. Jack Skellington’s Halloween Town is the perfect place, especially if you prefer celebrating this affair instead of jumping straight to Christmas. But if you’ve got Skellington’s curious bones, then a snowy Halloween Town might be your cup of tea, too.

Not going to lie, the afterlife never looked as fun as it did in The Corpse Bride. Maybe it’s the addictive tune of Remains of the Day or the active decision to intentionally make the afterworld more colorful than the world Victor roamed in. The tight-knit community of the dead has amazing stories to tell, ones we might not be tired of hearing. Nonetheless, we need to get used to the spectacle of weird creepy crawlies, falling bones and newcomers in denial.

Tim Burton’s adult reimagination of Alice of Wonderland holds an opulent mirror to the times. Yet, despite its flair for the whimsical and twisted iterations of this bonkers childhood tale, it still echoes many of the absurdities we go through today. Look at the leaders with more style than substance (The Queen of Hearts) or panicked people at the bottom (Nivens McTwisp). As a result, this version of Alice In Wonderland feels more like a familiar image than uncharted territory. And honestly, I prefer dealing with a fantasy world in shambles to a regular world in chaos.

It’s common knowledge that movie adaptations of famous books sometimes tend not to hit the nail on the head. For others, Miss Peregrine’s Home For Peculiar Children suffered the same fate, even at the hands of maestro Tim Burton. But if you watch this without any expectations, you’ll enjoy another movie filled with fantastic wonder worth protecting. Okay, we understand that being stuck in a time loop is boring. But isn’t it nice to stay in a place where you’re welcome, safe and celebrated regardless of powers?

The verdict is still out if Tim Burton’s Wednesday will spook and amaze, as this Netflix series will count as his TV show directorial debut. Nonetheless, we can’t wait to see the magic he’ll make with the horror scene’s newest it girl Jenna Ortega.

Did we miss any Tim Burton worlds in this list? Sound off in the comments below!