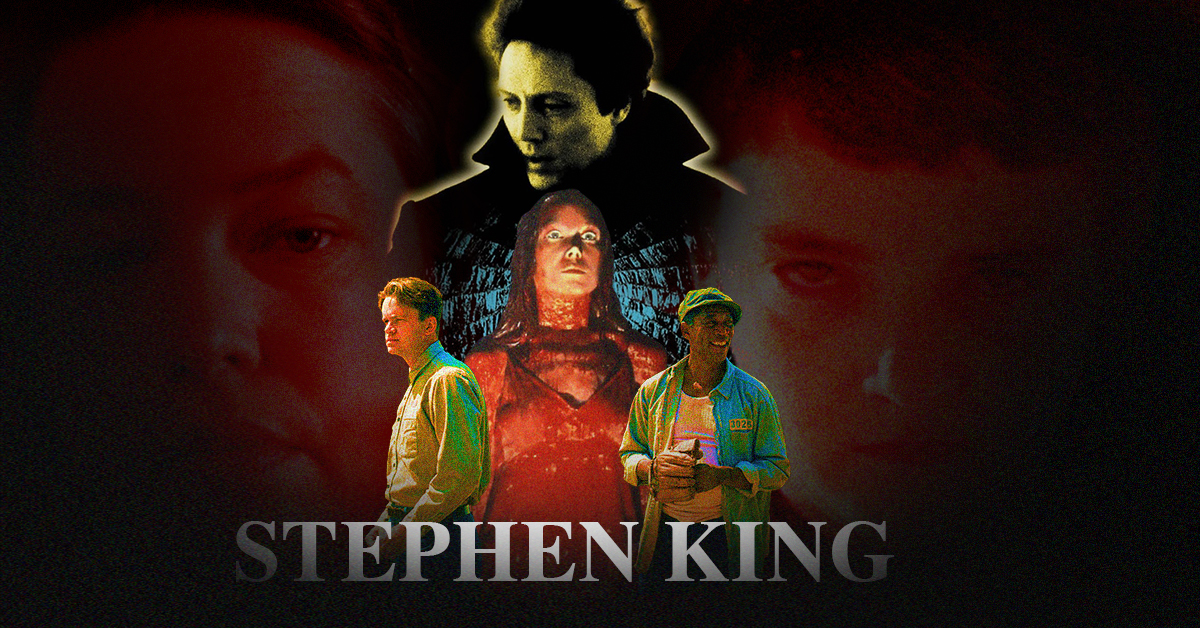 Stephen King Movies To Binge On This Halloween

Stephen King is the undisputed King of Horror

Stephen King, the undisputed King of Horror, the prince of darkness (and anti-MAGA viral tweets,) the writing savant who—even at the tender age of 75—continues to churn out books like the rest of us consume TV series, just as he has for the past half century. His books are often famously adapted onto the big-screen, with the producers of Hollywood being fully cognizant of the high cinematic value his work tends to exude, ready to pounce at every opportunity.

Today, much of King’s work has been immortalized on screen with film adaptations that have gained critical acclaim in their own right. In the spirit of the Halloween season, we encourage you to rally a few friends or loved ones, and binge on Stephen King-adapted films.

Here are some of our favorites.

Kathy Bates won an Oscar for her terrifying and deeply unsettling portrayal of Annie Wilkes, a disgruntled nurse who “saves” the life of her favorite novelist, played by the late James Caan. Mentally unstable, she then forces the recovering author to write a novel for her since she is his self-proclaimed “number one fan.” This might be King’s most disturbing film, since the type of deranged captivity the film revolves around isn’t a far-fetched scenario from reality. Later, King revealed that Misery was an allegory for cocaine, a problem he had to tackle in his youth.

Body horror god David Cronenberg brings out the best in the story of a New England school teacher (professional weirdo Christopher Walken), who gets up from a years-long coma with sudden ability to see the future of anyone he touches. It co-stars Martin Sheen as an angry, conservative politician ascending to power through working-class populism and ready to go to war. Sound familiar?

Although this is not—technically-speaking—horror in the strict sense of the term, Shawshank Redemption shows King’s mesmerizing range as an author. All-around good guy Andy Dufresne (Tim Robbins) is wrongly convicted of murdering his wife (that’s scary enough), and is sentenced to life in the slammer where he meets kind-hearted prison vet (Morgan Freeman). The two form a brotherhood that overcomes their dire conditions and the endemic racism of the time. This is one of those movies that you can watch repeatedly for its heart-warming, yet gritty conclusion and Morgan Freeman’s comforting inflection.

Children of the Corn

A middle class couple (Hamilton and Peter Horton) is on its way to the Pacific Northwest when they make the grueling miscalculation of stopping in a tiny Nebraska town, which unfortunately happens to be run by a killer, pious cult of baby-faced preteens. Not only is this film scary, it effectively depicts enduring American tensions—between young and old, rich and poor, god-fearing conservatives and liberal atheists.

In this creepy adaptation of Stephen King’s infamous horror novel, a sullen and vulnerable teenage girl, Carrie White (Sissy Spacek), is constantly bullied by schoolmates and faces abuse from her religious mother (Piper Laurie) at home. When bizarre things start occurring around Carrie, she begins to realize that she possesses supernatural powers. Asked to the homecoming dance by the kind-hearted Tommy Ross (William Katt), Carrie tries to relax and be a regular teen, but things take a sinister and terrifying turn.