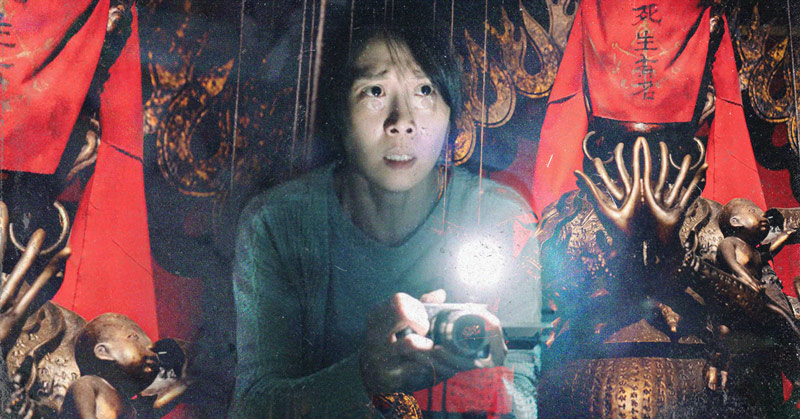 But fair warning, some might just fuck you up

When we need to distract ourselves or want to feel something, we all turn to movies or documentaries. After all, a good marathon brings much-needed spice to our mellow lives. But when action scenes become mechanical and heartbreak films feel cheesier than sad, it’s time to move on to horror and true crime. Whether it’s the thrill of anticipating a jumpscare or the stress of cheering (or berating) the protagonist onscreen, we all love a good scary flick to touch our cold, desensitized hearts. Enter: the titles trending on Netflix.

Looking for your next flick this weekend? Watch these ghastly horrific (sometimes comedic) titles while you cozy up. But fair warning, some might just fuck you up.

RELATED: A Low Down on the 2022 Emmys: All the Numbers, Feels and Questions

You might’ve already heard of this film on Twitter. But this is your sign if you need an additional push to watch it. Incantation follows the story of Li Ronan and her six-year-old daughter Dodo through found footage. The mockumentary-style film has its twists and turns that may not have you jumping out of your seat, but it will leave you unsettled. If you need more convincing, Incantation currently holds the title of “Highest Grossing Film” in Taiwan for 2022. Plus, it’s still trending on Netflix.

Any zombie film junkies here? Here’s one title trending on Netflix you should check out. Ella Balinska (Charlie’s Angels) stars in the newest reboot of Resident Evil. The series counts as the ninth live-action adaptation of the well-loved video game by Capcom. An outbreak of the T-virus caused a global apocalypse, reducing the human population to 300 million uninfected survivors that hide from cannibal mutants. Jade Wesker (played by Balinska) vows to bring down those responsible for the outbreak: The Umbrella Corporation.

If you prefer cozying up to true crime documentaries, perhaps the newest title trending on Netflix may interest you: My Daughter’s Killer. Not exactly horrific or spooky, but enough to move you differently. The docuseries follows the case of Kalinka Bamberski, a French teenager who died in 1982. Her father, André Bamberski, fights to bring her killer to justice, even crossing the borders of France and Germany. His journey even led him to take extreme measures, all in the name of love and justice.

Learn more about the case by watching “My Daughter’s Killer” on Netflix.

If you want to laugh a little, then dark comedies should also be part of your list so take a chance on Lana Condor’s newest series: Boo, Bitch!. It’s senior year, and a pair of best friends forever take it as their last shot to greatness. So they live, live and live—until one of them dies quite literally. Undeterred by the threat of the afterlife, Erika (Lana Condor) and Gia (Zoe Margaret Colletti) still try hard (read: very hard) to make the last stretch of high school count. This dark comedy might be too Gen Z for some of you, but it’s refreshingly entertaining.

Catch “Boo, Bitch!” only on Netflix.

A bonus recommendation for all of you. If you’re looking for some local ~flavor for this weekend’s jump scares, let us offer another recommendation: Eerie. Many of us are all too familiar with the alleged horrors that haunt our Catholic schools, and this Mikhail Red creation doubles down on that while adding his own twists. Eerie follows guidance counselor Pat Consolacion’s (Bea Alonzo) investigation after a student’s unexpected and gruesome death. While some might point to the abusive Mother Alice (Charo Santos-Concio), Pat’s involvement leads her to uncover the school’s secret.

What do you think of these titles trending on Netflix? Sound off in the comments below, and horrific happy weekend 😉