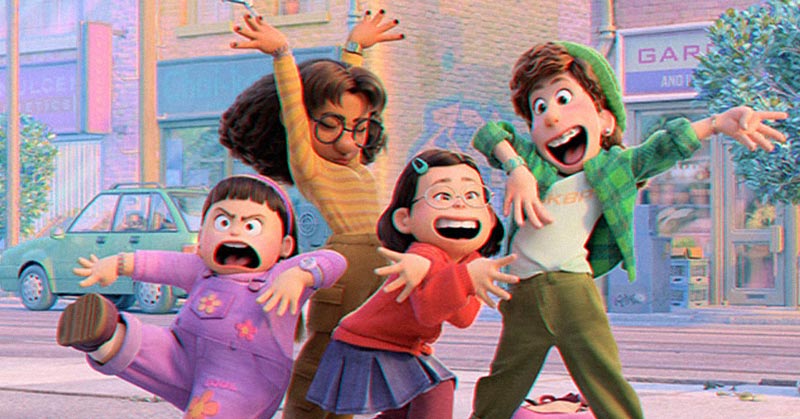 Turning Red walks us through adolescence

Disney comes in hot this March with the release of Turning Red. Plus, Pixar brings in their animation A-game while adding influences from anime. Directed by Domee Shi (the brain behind the Oscar-winning Pixar short film Bao), this movie explores the early adolescence of a Type A Chinese-Canadian girl named Mei Lee (Rosalie Chiang). She harbors a secret: she becomes a giant red panda when she gets too excited.

As it turns out, each woman in the Lee family turns into a red panda when they come of age. This includes her overprotective helicopter mother Ming (Sandra Oh), her aunties and even her grandmother, Wu (Wai Ching Ho), who all went through a red panda transformation. The rest of the movie follows Mei in containing her beast and following her mother’s wishes while juggling the chaotic life of a 13-year-old.

Despite it being one of 2022’s most polarizing films (both surprisingly and unsurprisingly), Turning Red gives us a peek into the journey of female adolescence. But in all honesty, it’s fun, cute, genuine and wholly universal. Finally, a take on the struggles of growing up that is both familiar and new. Scroll ahead as we list down why it’s one refreshing coming of age film.

Exploration of puberty and teenage priorities

Aside from bodily changes, Mei encounters new kinds of emotions. She’s at an age when she realizes that she’s capable of attraction and infatuation. Mei’s got it down bad, may it be a cute boy from around the block or the love of her life, Robaire of 4*Town. And it’s normal for teens to entertain and explore these new sensations. So she pines, she draws, and she flirts a little. She sneaks out, goes to parties and tries to enjoy her life—much to the disappointment of her helicopter mother.

The rest of the movie’s teenagers do ordinary things expected of people their age, such as exploring who they like to see and who they look up to. They work smart and hard to see the boy band of their dreams and go the extra mile to look cool. I don’t know about you, but we’ve all done that in one way or another.

Found family and your actual family can coexist

Mei’s relationship with her mother is as vital as her friendship with Miriam (Ava Morse), Priya (Maitreyi Ramakrishnan) and Abby (Hyein Park). So one of Mei’s most significant conflicts is keeping her favorite people close: her mom (despite her strict tendencies) and her best friends. While avoiding conflict and disappointment might’ve worked for a while, Turning Red’s protagonist realizes that she must face the music and set boundaries. Yes, even if it means saying it like it is, AKA reminding her mom that she also needs a life outside her familial duties. Parents like Ming take some time coming around, though, especially when they refuse to accept that their baby is all grown up.

But it works out in the end. It really does.

RELATED: The Toxic Expectations Of The Filipino Family

In Ming and Mei’s family, their red panda transformation powers started as gifts but became “inconveniences” as times changed. The older women underwent a ritual to contain their red panda spirits to adapt to the times. For their generation, shunning this power away and keeping it under wraps was the only way to control it. But with the help of her best friends, Mei realized that the gift is still a gift. There’s nothing to be ashamed of, especially if it continues to protect and guide their family. Mei’s aunties, mother and grandmother learn to trust the younger generation. She is old enough to decide for her body and destiny.

Bonus: Blasts from the past

Set in the early 2000s, Turning Red brings adult viewers back to specific scenarios. Mei treats her Tamagotchi as her actual child. The boys of 4*Town remind us of boybands like Backstreet Boys and N*SYNC. Listening to music meant borrowing mixed CDs or waiting for the track on the radio. Not to mention, the Cha-Cha Slide is a consistent guest at the hottest party. These details might fly over the heads of this generation’s kids, but are enough to send some of us back in time.

Got other reasons why Turning Red is worth watching? Let us know in the comments below!