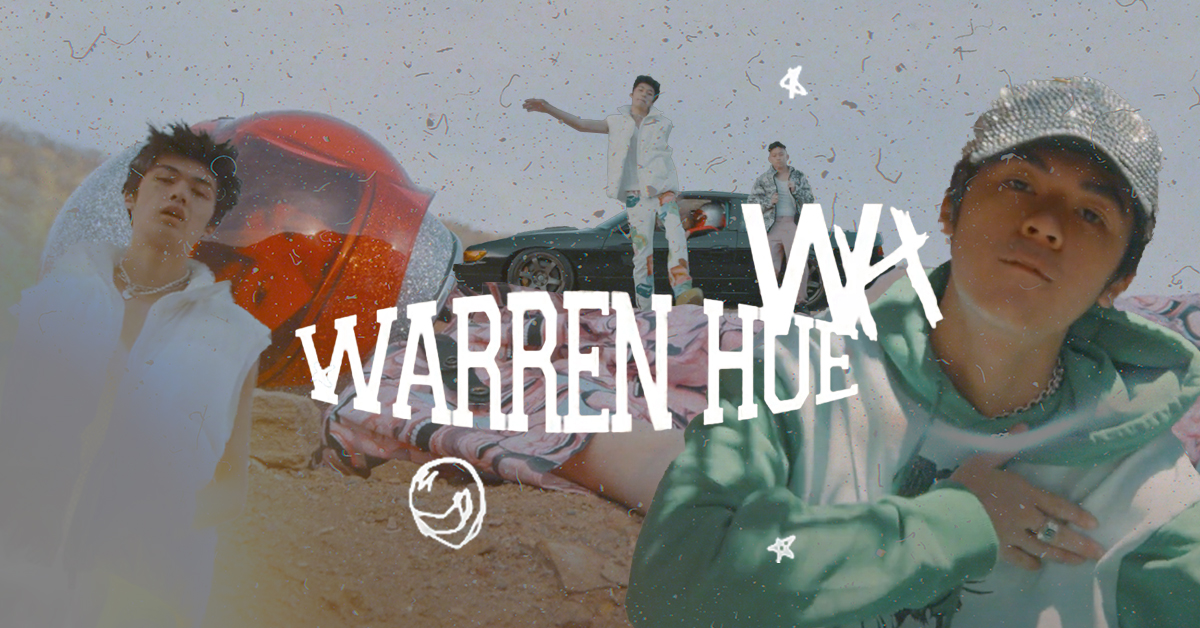 We caught up with the rising, Indonesia-born rapper

For many of us, the first two years of the new decade offered all sorts of change—big and small. Our priorities changed: getting our lives together and striking a balance between work and play came first. Then, we received chances to reevaluate our careers, rewrite our goals and pursue our dreams no matter how seemingly impossible. The bottom line is: change is constant, even as the new year rolls in.

And for Indonesian rapper Warren Hue, whose real name is Warren Hui, 2021 brought a lot of pivotal changes. From signing with 88rising, moving to a new country, releasing multiple singles and collaborations, and performing a set at a major music festival—he’s hit milestone after milestone in a matter of months. Heck, he even got his full-circle moment with Rich Brian—from snapping a photo with him at the mall ages ago to fully bonding with him years later.

But do not be mistaken—this shift is the result of a slow burn.

As early as 16 years old, Warren released an album called ALIEN, heavily influenced by Aminé under the name warrenisyellow—a pseudonym he carried from Soundcloud to YouTube. He went on to release SUGARTOWN in 2019. But like many artists, he found growth. Shedding the warrenisyellow brand, he steps into a new chapter as Warren Hue. Described as a “heady cocktail of alternative hiphop,” Warren Hue’s music pulls influences from different genres like house, industrial and R&B. May it be the funky instrumental of candy choppa, the addictive beats of omomo punk or the steady rhythm of WEST, Hue shows off unique mixes that allows him to stay true to himself.

Up ahead, we catch up with Warren Hue.

Wonder: Your sound is a unique mix of different genres—from electronic to house and R&B. Who are your particular musical influences, and how do you figure out which elements to pair together when you make music?

Warren Hue: Tyler, The Creator—a huge inspiration. I feel like everyone is inspired by Tyler, The Creator, who is my age or even in their mid-20s. Kanye West, for sure. I feel like he does a lot of things, that he bends genres and tries something new for every album. Earl Sweatshirt, too. Definitely, Aminé, when it comes to my earlier projects, he was a big one. He just made songs feel so cinematic and alive, and that’s what I wanted to do with a lot of my music. I like touching new sounds and doing everything.

I do pay attention to my lyrics. I write in different times and pieces together when I have the full vision. But I can just be like in the studio, writing in my bedroom. I hear the instrumental more and fiddle with the whole song and the beat, and I try to experiment with new vocals. That’s what I do.

W: Speaking of your performance, you got the crowd excited with WEST in HITC 2021. Can you give a glimpse into your creative process for the track and the inspiration behind it?

WH: WEST is a track I made four months ago. I got sent the beat by Bacon The Donuts, and it just had such fun energy when I heard it. It reminded me of the 2017 stuff that I used to fall in love with, like XXXTENTACION, that Soundcloud era. I wanted a party song or a song that people can jump to in crowds. That’s what I did when I heard the beat, and then I recorded it a day later.

WEST is basically me showing that I’m in California, LA, the west coast. It’s just a glimpse of the lifestyle I’m living here and just updating people on what’s cool right now.

W: Since WEST talks about what you’ve done so far, what’s the biggest change you experienced since you signed with 88rising and moved to LA?

WH: The biggest change is recording in actual, crazy studios right now. I used to just record in my bedroom a lot. I would just be so comfortable with that while experimenting with stuff, and I wouldn’t feel weird about it. But since we’re in big studios, I have to get used to it—and I’m working with new producers in person. That’s the first time I’ve ever done that musically because I didn’t have that experience in Jakarta. Yeah, 88rising helps with that and pushing my vision forward. That’s the biggest difference—for sure.

W: Did you ever think you’d be performing on stage with so many different Asian artists for Head In The Clouds 2021?

WH: I never really did expect that this soon, especially. I was about to the Jakarta Head In The Clouds in 2020, but COVID hit, so it was sad for all of us. But yeah, I’ve always been an 88rising fan while making music. So it’s crazy to be performing with Brian and NIKI onstage, too. It was an incredible experience, and I’m super grateful that it happened so soon and that they trust the vision. So it was super dope to be part of the lineup.

W: A few weeks ago, you Tweeted that you’re in “album mode.” What sound can your listeners and fans expect from your upcoming release?

WH: I’ve performed a lot of stuff from HITC 2021 that people I already know will be super excited about, which I’m glad I got really cool energy onstage with that. They’re going to expect new stuff, new sounds. This album is tapping into a new experimental field or something I don’t usually do. I’m going to go harder. I’m trying to make 2022 a very prominent year with this album: Boy of the Year.

W: 2021 was a wild, wild ride. If you could do anything over from the past year, what would it be?

WH: I would do the festival over because that whole weekend was just the best. Of all the things in 2021, that festival was just something else. It was super special. The people there had such good energy all the way through. I knocked out for four days because it was just so tiring—but I would redo that moment for sure. 100%. And it’s going to happen in 2022.

W: As we welcome 2022, do you have any New Years Resolutions or goals you want to hit?

WH: Getting my album out. That’s one of the goals I’m trying to do, of course. I want to do shows, a lot more shows. Maybe a mini-tour if possible because that’s a newfound thing I’ve been in love with since HITC.

Find new hobbies. Because music was my hobby in high school, and now it’s almost the main thing I’m focusing on. I have to find and try something else I could do. Probably skate—I’m going to return to do more skating.

Warren Hue has come full circle—but that didn’t stop him from charging full steam ahead, especially with new music and new heights he aims to conquer.

While we sit tight for the release of Boy of the Year, stream WEST by Warren Hue here.