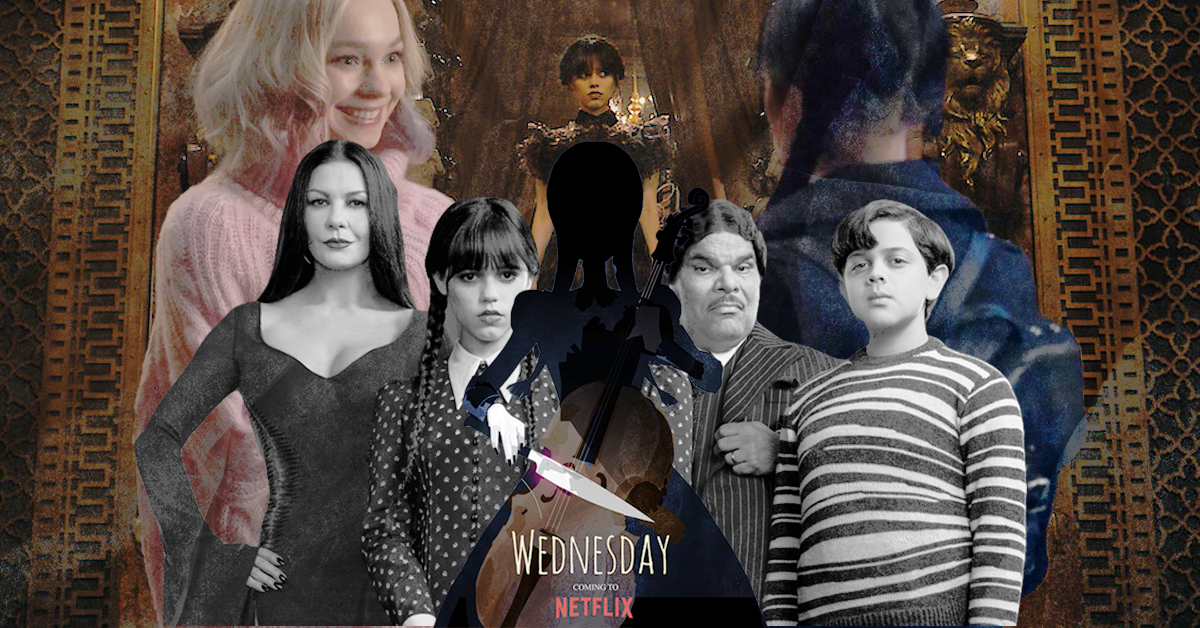 Leave your expectations at the gates of Nevermore

It’s been a good week since Tim Burton’s Wednesday premiered on Netflix. Within that time, the series surpassed Stranger Things 4 as the most-watched English-language series on the platform. Because of its dark and mysterious, almost CW-esque branding, many people press play with curiosity. So how does it set itself apart from the well-loved The Addams Family movies of the 90s? It could be the show’s dark blue filter, the 2020s-era setting or the cast of newcomer and veteran actors? Or maybe it’s because this Wednesday isn’t your typical teenager.

A lot of credit should go to Gen Z Scream Queen Jenna Ortega, who ushered in Wednesday’s new look: two plaits, full bangs and an unflinching Kubrick stare—not to mention an impeccable talent for sprinting in heavy AF Prada Monolith sneakers. She breathes a new spooky—not kooky—life into the character, all bolstered by Tim Burton’s knack for the dark and eerie setting that sets the tone of the series. Need spoiler-free evidence? Check out her gothic, Fosse-inspired dance to The Cramps’ Goo Goo Muck. A cultural reset.

Let me nip it in the bud, though. If you plan to give Wednesday a go, leave your expectations at the gates of Nevermore. This isn’t a continuation of the 90s-era movies; it’s a beast of its own. While the Addams Family movies of that era deal with the humanity of the spookiest, kookiest and ookiest creatures, this series explores Wednesday’s coming-of-age. The teenage experience also plagues and troubles the darkest souls, making this story somewhat deviant of its original DNA.

RELATED: Some Of The Scariest Horror Movie Characters In Pop Culture

As far as plots go, Wednesday follows the titular Addams family member on her journey into Nevermore Academy, a special boarding school for outcasts. In this universe, the human population consists of two types of people: Normies (AKA humans like us with no supernatural talents) and the extraordinary outcasts who wield powers of their own. Wednesday’s arrival at the school, her IDGAF attitude and smartest-outcast-in-the-room moments not only shake the social structure but also help in the discovery of her psychic abilities. All these coincide with a series of murders that rock the entire fictional community of Jericho County.

Most of the depictions of the Addams Family’s daughter have her shy of age ten, but the Netflix series bears witness to a 16-year-old Wednesday undergoing the quintessential high school experience. Sure, she still spooks some outcasts with her love for torture and the macabre, but Wednesday also joins an extracurricular club, attends required volunteer programs and goes to class. Once homework is done, she sneaks off to solve the murder mysteries and even gets forced to join her school’s annual Rave’n dance.

Of course, Wednesday’s personality attracts foes: bullies, self-appointed Queen Bees and social expectations. She even becomes the ire of Principal Larissa Weems (Gwendoline Christie) and Sheriff Donovan Galpin (Jamie McShane). But despite all these, Wednesday discovers that company is better than solitude. After much struggle, she gets along with her polar opposite, Enid Sinclair (Emma Myers). She makes more friends, such as Eugene Ottinger (Moosa Mostafa), and finds herself in a complicated love triangle with Tyler Galpin (Hunter Doohan) and Xavier Thorpe (Percy Hynes White). All the while, she tries to get to the bottom of the murder mysteries.

Wednesday is nearly a perfect blend of the comedic and the macabre, what’s mysterious and what’s straightforward. It keeps you on your toes with suspense while giving you some room to chuckle. All the clues planted through the small details will definitely have you re-watching again and again. With a long list of deadpan one-liners to references alluding to Carrie (1970), and the role Christina Ricci plays as a new character, this show guarantees a spooky fun time. After all, who would refuse to watch Thing scuttle away to do Wednesday’s bidding? Or seeing the main character smile the widest once Uncle Fester (Fred Armisen) pays a visit?

But, of course, we still have our gripes with the series, such as plot holes in regard to the Addams family’s heritage. And as much as we love Wednesday’s parents, Catherine Zeta-Jones and Luis Guzman have a considerable lack of screen time and chemistry. (That, or Anjelica Houston and Raul Julia set the bar way too high that anyone can’t compare anymore.) The story did a good job of building up to the ending, but it still feels like a chaotic and abrupt end to eight concise episodes. Worst (or best) of all, everything ends with a lack of closure thanks to the last scene being a cliffhanger.

RELATED: Horror Movies for People That Don’t Like Horror

We hope that the series doesn’t suffer the fate of cancellation, because we all want to know what happens next. Will Wednesday return to Nevermore? Did she really defeat the Big Bad or is there an even more powerful and sinister force waiting to exact their demise? Well, only time will tell… hopefully.

Catch all eight episodes of Tim Burton’s “Wednesday” on Netflix.