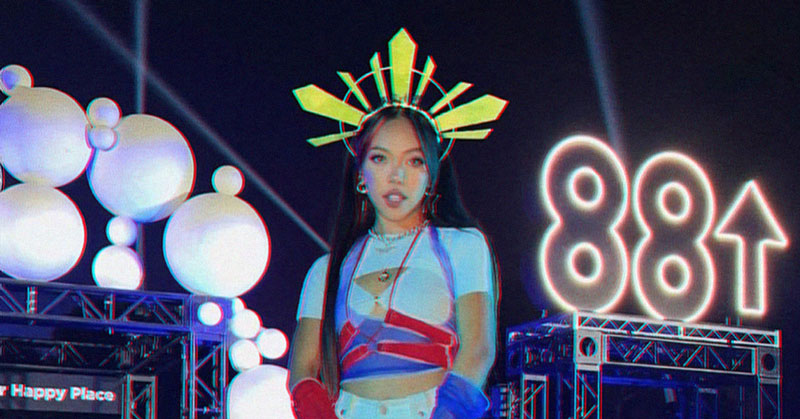 As the world slowly reopened and live shows were slowly popping up one at a time, many music festivals took it as a cue to welcome audiences back with open arms. From Lollapalooza to Coachella, concerts and live performances made a comeback. So, of course, it’s only natural for 88rising to jump in on the fun. After over a year of uncertainty and virtual festivals, the trailblazing Asian American label rocked the Rose Bowl Stadium in Pasadena, Los Angeles, from November 6 to 7 with Head In The Clouds 2021.

Notable festival-goers also made headlines during the HITC 2021 weekend. Fashion and Crafts TikToker Nava Rose sported an outfit inspired by the Philippine Flag. Blue and red accentuated her all-white fit, while her literally shining headpiece could rival Miss Universe 2018 Catriona Gray’s iconic Sun ear cuff. Meanwhile, BLACKPINK’s Jennie also attended the festival and was spotted dancing along to Audrey Nuna from the far end of the backstage area.

But instead of keeping the fun all to themselves, 88rising streamed both days of the festival on Twitch for free. Fans from all parts of the world tuned in via AmazonMusic’s official channel. The exclusive livestream included footage you won’t see anywhere else. It effectively curbed the FOMO with behind-the-scenes sneak peeks and exclusive interviews. Did we mention that the livestream host was none other than KevJumba (yes, as in the OG YouTuber Nice Guys Finish Last KevJumba)? So at-home HITC goers had some of their own fun, too.

Nonetheless, it seemed like Head In The Clouds was the music festival of the year as artists and the crowd enjoyed each other’s presence. In case you missed the stream, we put together the highlights from Head In The Clouds 2021.

Ylona Garcia (our cover girl for April, btw) graced the Double Happiness Stage on the festival’s first day and commandeered the audience like a pro. You could definitely feel her stage presence even through the stream, one that urged whoever watched her dance along to All That. Safe to say, Ylo was in her element once the music started.

Fellow festival first-timers DPR Live and DPR Ian rocked the 88 Stage with their first live performance of Diamonds + And Pearls from the Shang-Chi and the Legend of the Ten Rings soundtrack and their popular songs Jasmine and Scaredy Cat. These two K-hiphop mainstays made their HITC 2021 debut unforgettable by bringing eaJ onstage for Jam and Butterfly. The two also got the crowd chanting “DPR we gang, gang” in true DPR show fashion.

CL did not come to play. At all.
HELLO BITCHES live from Head in the Clouds ?@chaelinCL?#hitc2021 pic.twitter.com/DIRYcGXmK5

​​For her headline set, CL performed her well-loved tracks such as Hello Bitches and MTBD, plus songs off her newest album, ALPHA. From start to finish, CL showed everyone why she’s called “The Baddest” because of her insane stage presence that never wore out. But another major highlight from her time on stage was when she brought the boys of DPR back to perform No Blueberries.

RELATED: K-Pop’s Second Generation is Coming Back, And It’s the Best Kind of Whiplash

One of 88RISING’s most prominent talents, Rich Brian was the second to the last act for day one. Performing his hits like Drive Safe and Edamame (complete with dancers dressed like the dish), the Indonesia-born rapper proved time and time again how great he is with keeping crowds interested. But nothing beats the goosebumps-inducing moment when he performed Slow Down Turbo, and the audience by the 88 Stage sang along.

MFBTY, made up of Tiger JK, Yoon Mirae and Bizzy—K-hiphop’s most prominent icons—set the stage on fire with their remix of Love Peace. But the standout was BIBI, who stole a few smooches from adoring fans as she sang her newest single, The Weekend. If anything, these artists proved why they’re named FEEL GHOOD MUSIC because their set was one heaping serving of good vibes.

The lofi hiphop singer charmed the whole 88 Stage while he took over. Aside from teasing new tunes from his upcoming album, Keshi sang classics such as like i need u and drunk, effectively pulling at everyone’s heartstrings. Keshi also hopped on eaJ’s set to sing Pillows, while NIKI brought him along to sing right here.

88Rising’s muse had a whole hour to herself and maximized each minute. Three different fits, 17 tracks and one whole field that sang along. Her entire setlist felt like a retrospective view of her career, such as her breakout single i like u, the magical La La Lost You and the intense anthemic energy of Switchblade. It was a thrilling hour for the girl who rose above the chaos of 2020.

Following months of radio silence, Joji made his return at Head In The Clouds. Performing singles such as Sanctuary, Gimme Love and Slow Dancing In The Dark, the singer made the most out of the crowd as they jumped and danced along to his songs.

NIKI, Rich Brian and Warren Hue reunited onstage for the finale, capping off the two-day festival with their performance of California. But as the crowd chanted “one more song,” the trio spontaneously performed an acapella bit of Midsummer Madness. It was immediately the best sendoff anyone could ask for.

RELATED: No Rome Kicks Off Highly-Anticipated New Album with ‘When She Comes Around’

If anything, Head In The Clouds 2021 couldn’t help but make us all feel hopeful. The light at the end of the tunnel wasn’t as dim as it was in 2020 because we can’t help but look forward to concerts, music festivals and live shows to make their grand return to our side of the world. But until we can freely enjoy the thrill of festivals once again—sweaty, unsocially distanced crowds and good music—we’ll be waiting in excitement.