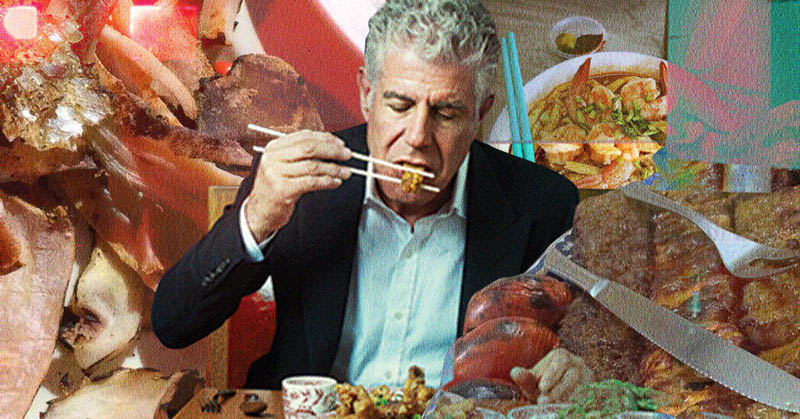 What Anthony Bourdain Meant To Me

I remember it vividly, as one often does when significant historical events occur. I was midway through lunch (an uncharacteristically dry plate of duck confit) at a random bistro in Paris’ Saint-Germain district when I got a text from a friend who spends the bulk of his waking hours on Twitter: “Anthony Bourdain is dead, suicide!”

I didn’t immediately panic, as fake news and internet hoaxes were a way of life then, as they are now. But after performing some rudimentary independent research, the dreaded truth revealed itself—this was very real; Anthony Bourdain had killed himself in Alsace, France, just a few hundred kilometers from the eatery where I sat in stunned disbelief. I didn’t finish my meal, left a few crumpled Euros on the table and stumbled onto the cobble-stoned streets dazed and disoriented; sorrow not far behind.

RELATED: Stanning 101: Long-Time Fans & Why They Keep A Distance

Years before, we had met briefly; serendipitously, he filmed a segment of his Manila episode of Parts Unknown at a friend’s apartment. He was polite but nonchalant and cool—remarkably consistent with his literary and television persona. When people hear the name “Anthony Bourdain,” it’s almost always synonymous with food. But for me, perhaps his greatest talent (and he had many) was found in his writing.

He was a struggling, chain-smoking, drug-addled, renegade chef when, in his early 40s, he (encouraged by his mother) submitted an essay, a sort of behind-the-scenes narrative of life as a chef (and prelude to Kitchen Confidential), to New Yorker magazine. It was so well-received that he was commissioned to write a book, which turned out to be the aforementioned megahit, Kitchen Confidential—the latter being the catalyst to his rise to fame.

He wrote vigorously and passionately throughout his career—more books like A Cook’s Tour, Nasty Bits, and Medium Rare; as well as fictional crime novels, cookbooks and even graphic novels. A real New Yorker, his writing style was decidedly masculine yet hopelessly romantic; constantly acerbic, often subversive, misanthropic and sinister. His prose was like a culinary amalgamation of Hemingway, Hunter S. Thompson and Kurt Vonnegut.

He became a TV star. And over the years, he gradually transformed from the rock n’ roll “host of a food and travel show” to a bonafide journalist, historian and humanitarian. He started off his television career ingesting things like cobra heart and fermented shark for sheer shock value and novelty before inevitably graduating, realizing he had a message and a platform. And because of his tangible authenticity (unlike other “celebrity chefs” at the time), audiences seemed to value what he had to say.

When Parts Unknown premiered, it was clear things had developed for Anthony Bourdain as both an artist and a producer. He was once quoted as saying “there is nothing more political than food,” and this theme resonated throughout the 12 seasons of the series. Sure, food was still featured prominently, but it was treated in a different light. It was a medium to understanding other cultures, creating discourse and ultimately promoting tolerance and acceptance instead of divisiveness.

It was lofty subject matter for network television, yes, but Anthony Bourdain knew what he was doing. By keenly eating other people’s cuisines no matter how foreign, almost like speaking a common language, a barrier is instantaneously broken down—in essence, it was a dialogue through food. Bourdain would visit countries from Congo and Cambodia to Colombia, and powerfully deconstruct their socio-cultural, political struggles, both past and present, always speaking with empathy to those affected. Frequently, the results were profound and distressing, other times, amusing. Insightfully, he enlightened us about the everyday plight, the trials and tribulations, of “the other;” always seeking compassion, not fear.

His life may have ended prematurely, but Anthony Bourdain affected, touched and fascinated millions globally. Four years after his death, the void he left remains substantial, but his legacy, his voice and his spectacular body of work will endure forever.