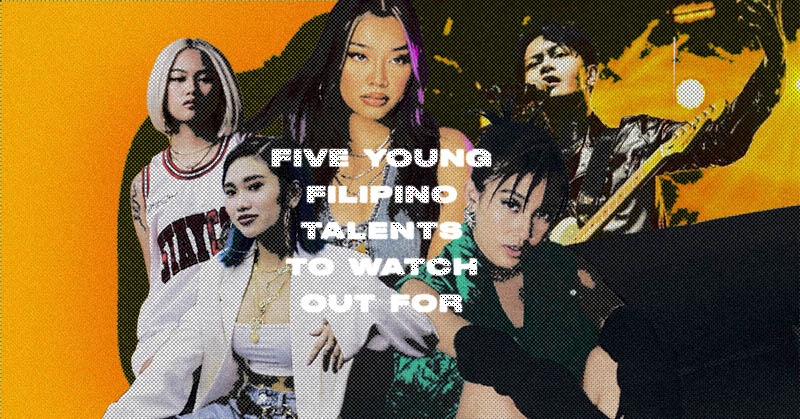 Five Young Filipino Talents To Watch Out For

Listen to these iconic hitmakers, all below the age of 25

There’s always something so refreshing in discovering young, unbridled talent. Artists seem to know the path they want to pursue, and are determined to reach it whatever it takes. While the path usually taken involves honing skills and showcasing them as an adult, some Filipino singers believe otherwise. Undeterred by the pressure of waiting for a certain time to chase their dreams, these young Filipino musicians make serious waves with their sweet melodies and punchy lyrics.

Check out these Filipino musical talents under 25 years old:

While the youngest in the bunch, this 15-year-old Filipino rapper has a flow that’ll have you hooked and an angelic voice that will make you move. Her young voice adds a unique flavor to her songs. For something dreamy, dazed and light, Yakap can serve as a saccharine lullaby for lonely days. But if your taste falls more on bad-ass anthems, then Dime Girls should be a mainstay in your All-Day Grind playlist. She even made an appearance in SB19’s Our Zone concert. The young star is brimming with talent, so do yourself a favor and stan talent. Listen to Alex Bruce.

Originally hailing from Cebu, the singer made it to the finals of The Voice Kids in 2015. Fast-forward to years later, Jolianne signs with Careless Music as the youngest in the roster, releasing a couple of heavenly singles under her belt. Her first single released under the label is called Sublime, a smooth and soulful track about finally taking her moment and making her dreams come true. Meanwhile, Jolianne takes a sad turn with the heartbreaking Routine. Every time Jolianne holds a mic to sing, the young Filipino musician’s vocals always drip with emotion. I’m convinced she has a sweet voice probably plucked from a choir of angels.

RELATED: What Went Down At #WonderAtThe4? A Lot

If you like classic R&B, you’ll thoroughly enjoy Denise Julia’s music. Mix Y2K-esque flavor and a soulful voice to match, and you get Denise Julia’s music. While many would compare her voice to Ariana Grande, her music is also reminiscent of FLO, early Kehlani and Ashanti. In short, R&B enthusiasts of all ages will enjoy her songs. Whether it’s the cheeky NVMD or the “I-could-care-less ”energy of Pity Ya, you’ll find yourself singing (and dancing!) along to this young Filipino talent.

Remember the iconic song called Serve that dominated TikTok? The one that goes, “Eat it up, eat it up, eat it up / Like it’s a wet kitty cat?” The genius behind it is 20-year-old rapper Zae. But don’t be too quick to box her as a one-hit-wonder, because her sick bars and rhythmic rhymes will get you addicted. So for when you feel yourself a little extra (which should be all day, everyday, tbh), play Zae’s discography. You won’t be disappointed.

Sparkling synths, arena-worthy effects and exceptional vocals? Ace Banzuelo has it all. A heady mix of synthwave, pop, R&B and hip-hop, his songs will have you listening with your undivided attention. No song of his is ever the same, whether it’s the 1975’s Robbers-esque electric guitar riffs accentuating Himala or Japanese city pop touches in Babae. Add in Ace Banzuelo’s profound lyrics that hit straight to the heart, this young Filipino musician will transport you to a different, magical world with each song.

RELATED: Paolo Sandejas’ New Single ‘Hide & Seek’ Is About Finally Finding The One

Did we miss other young talents worth spotlighting? Sound off in the comments below!