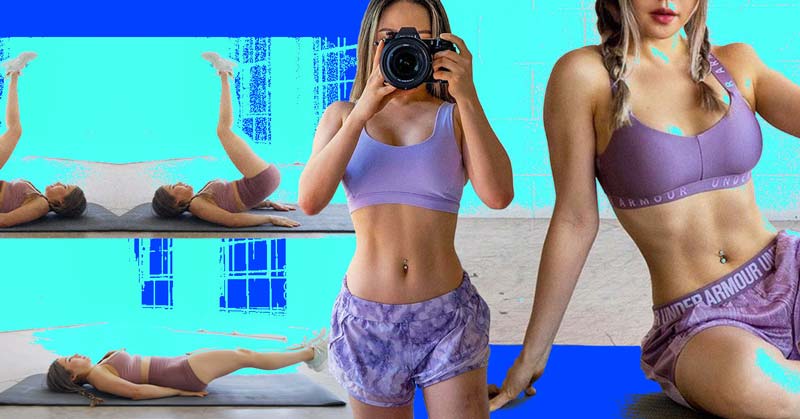 There’s been no shortage of internet talk where Chloe Ting is concerned.

Recognized as one of YouTube’s biggest fitness stars, it seems the quarantine has only done wonders for the Bruneian vlogger’s already massive following. She’s gained close to four million followers in the last month and has recently unlocked the milestone of having a video trend in the United States and Canada upon its release. Factoring in the extra time we’ve all been spending at home, the extra energy we have to expend and the pressing need for methods to push the stress out of our systems, Ting’s meteoric rise to the top of the YouTube food chain makes perfect sense.

And it’s clear to see why people—whether complete beginners or moderately fit—gravitate towards her videos in particular. The duration seems doable, ranging from 11 to 20 minutes. The thumbnails put her ultra-toned body on blast, while the titles speak to the ideals society has ingrained within all of us: “Grow Booty NOT Thighs” “Tiny Waist & Round Butt”“Slim Legs Workout.” Her videos (save for her 35-day Hourglass Challenge) are equipment-free, making them relatively home-friendly.

The most important factor is arguably this: Chloe Ting doesn’t just release one-off videos. She crafts full-on fitness programs. Ting maps out a fully online exercise itinerary, planning your daily workout so you don’t have to for as long as eight weeks. And all of it is 100% free.

I fell for the appeal of Chloe Ting challenges myself. While I’d done a number of her workouts in the past, chancing upon them in my list of recommended content and giving them a shot for the heck of it; I’d never committed to any of her challenges prior to the lockdown. I’m no expert, but even I could tell her form wasn’t the best: butt too high in the air during a planking move, shoulders caving in for moves that call for a chest opened proud. Despite my doubts, I fell down the rabbit hole, curious to see if the transformations thousands had shared online were truly achievable.

RELATED: At-Home Yoga Workouts To Help You Flow Through The New Normal

Introducing the challenge in question.

At press time, Chloe Ting channel has 800 million cumulative views. Right around a fifth of that number—yes, a whopping 150 million eyeballs—can be attributed solely to her “Get Abs in 2 WEEKS” video, which along with her “Do This Every Day to Lose Weight” video forms the mainstay duo of her famous two-week ab shred challenge. Easily her most popular challenge (and also the shortest!), this was the one I chose to take for a spin.

Don’t be mistaken: these videos aren’t the only ones you’ll encounter. This Buzzfeed article claims to have put the challenge to the test, but mistakenly only features the ab workout. Spanning a total of 14 days, the full challenge includes both aforementioned videos every day, often in combination with a number of other workouts. The daily duration ranges from 23 to 47 minutes, except on active rest days, days 5 and 9. While the challenge focuses heavily on toning the abdomen and lowering body fat so results show through, a number of the videos included in the program also target the arms and lower body.

Is a two-week journey to toned abs too good to be true? 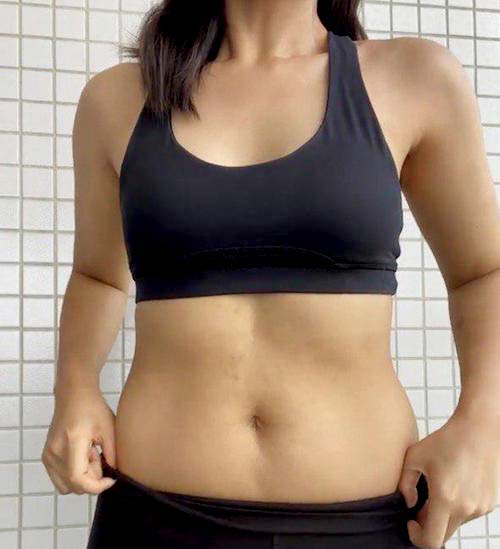 I kicked off the program in the tail end of March, alongside my sister and my boyfriend who were equally intrigued by the results the workout promised.

My life pre-challenge was fairly active. After gaining weight in late 2019,  I returned to working out regularly in February 2020. Barre and spinning classes became my pre-work wake-up call or my post-office stress buster most weekdays. After keeping it up for a good month, I began to lose fat and tone up—all while burning the stress from work right off, which was probably the best part of it. When the lockdown was announced, I tried to compensate with home workouts but didn’t have a particular plan of action until I took on the two-week ab shred.

One of the things I hear about Ting’s workouts from friends who work out regularly is that they’re too easy—and there’s definitely some truth in that. Most of her videos aren’t particularly challenging on their own. Unlike most FitnessBlender or LesMills videos, I find that Ting’s uploads are better compounded: two to four videos, when paired well, can add up to a strenuous session. That said, the challenge had me working up a sweat every day, even though I do HIIT and cardio regularly. I still dreaded the beginning of my exercise window, anticipating the struggle and the sweat and grunts whenever my laptop screen signaled it was time for plank jacks.

Within a few days, progress was visible. The first rest day saw the reemergence of my upper abs. By the ninth day, my obliques were more than just a faint, easy-to-miss shadow on the surface of my stomach. Despite the ache that followed each session, I looked forward to seeing myself in the mirror the next morning. I knew I could lift my shirt, inch my waistband lower and see a little more improvement than yesterday.

As the challenge progressed, I did find little gripes that I chose to gloss over. Me and Chloe’s taste in music appeared to be from opposite sides of a spectrum. The workout videos were extremely repetitive, which made exposure to the same background music laboriously frequent. Another observation: despite days 10, 12 and 14 clocking in at 47 minutes, my progress slowed towards the end of the program. This wasn’t the case for my sister, though, so I chalked it up to our bodies manifesting results differently.

Despite my complaints, I couldn’t deny the results. It’s not”shredded,” but within two weeks, I lost three-quarters of an inch from my waist. My stubborn lower belly lost an inch and a half. Compared to many of the results I’d seen shared online, my progress wasn’t as jaw-dropping—but honestly, I expected it. Many see this challenge as a welcome wagon, a gateway to a more active lifestyle after being sedentary. Since I was already working out regularly, it only made sense that my progress was less drastic. Regardless, I was satisfied. I felt lighter and I slept better, rewards I consider just as good as the whittled-down waist I got at the end of it.

Caution: copious amounts of man-screaming ahead.

Like any celebrity that rises to stardom, videos are equally subject to criticism upon unlocking viral status. When Ting’s two-week challenge stumbled into the spotlight, fitness experts were quick to debunk not only the efficacy she claims the workout has but her channel at large.

Bodybuilder-YouTuber Greg Doucette clearly has his opinions on the matter. An IFBB Pro Bodybuilder holding a Guinness World Record for powerlifting, there’s no denying that Doucette knows his stuff. He majored in Kinesiology twice. He coaches. Authored training and cookbooks. Greg is well experienced to debunk fitness fluff. He points out Ting’s questionable weight loss and dieting tips in this video, rebutting with scientific facts and well, logic. I’m no fitness guru, but it’s simple reasoning: even when intermittently fasting, you can’t eat everything and expect to shed pounds. You can’t stay in your comfort zone if you want to see results. “You need to burn off a tremendous amount of calories to burn fat. 3500 calories are required,”Doucette. Weight loss won’t come from simply “getting your lymphatic system moving.”

Doucette also comments on the ab workout from the two-week shred program. He points out that while it’s great for the abs, but it won’t get you shredded on its own. Like the Buzzfeed writers mentioned earlier, he seems to miss that this video is not the sole component of the challenge. Would his opinion change if he knew there were supplementary workouts and daily cardio in the equation? It’s hard to tell.

Another bodybuilder, Dino Kang, recently weighed in on Chloe Ting workouts as well. In a 62-frame series of Instagram stories, he craps on her videos (his term), altogether making similar points as Doucette. He makes valid, science-supported points, but in the same breath, disregards the existence of the hundred, one of the most popular moves in pilates.

sorry ??? just a warning! up to u if u believe me or not! ? an alternative is Sohee Fit on youtube ##chloeting ##fyp? original sound – niña

Not a fan of the yelling or the text-heavy Instagram stories? Filipina sports science major and courtside reporter Niña Alvia makes her own point in an informative Tiktok video. She also alludes to the frankly derogatory tone male experts assume when talking about Ting’s content. Alvia points out the abundance of push exercises—moves that work the chest, deltoids, and triceps—and the lack of pull exercises to compensate. “You really need to work your antagonist’s muscles or else you might get injured,” she explains.

Alvia also addresses the false hope that could come with exercise challenges with a deadline. True to my own experience, she stresses that Ting’s challenges may only work for “those who have the same body type as her, or are beginners, or literally haven’t worked out in weeks.”

I completed the two-week ab shred in the second week of April. Would I recommend the program. I would have said yes. Chloe Ting workouts are motivating. However, with questionable advice and the threat of injury in the long term, here’s the verdict: the gimmick might not be worth it. Short challenges might seem like a good shortcut, but shortcuts don’t stick. Sustainable workout habits and lifestyle changes do.

There are better, more holistic ways to achieve fitness out there. And yes, some of them are still free of equipment and free of charge. Here are some of them: