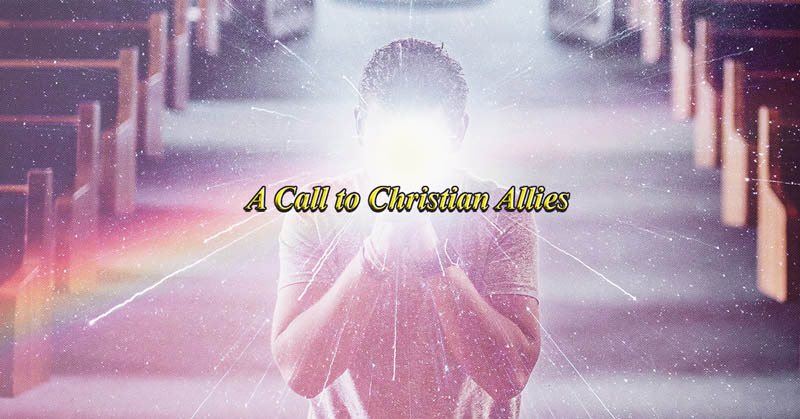 A Call to Christian Allies

For Christian allies of the LGBTQIA+, here’s a call to move your allyship beyond closed doors

As we inch closer to the end of our month-long celebrations and resistance for LGBTQIA+ rights, which also coincides with the beginning of a new administration, I am reminded of one of the last few sermons I heard face-to-face:

The preacher had taken to the pulpit to rebuke—or biblically gaslight—the congregation about making others stumble. To illustrate their point, they had made an example of Christians who expressed support for others who came out of the closet. To the preacher, it was absolutely wrong for Christians to support LGBTQIA+ people as the Bible is clear about homosexuality. In fact, the Bible is so clear that the preacher had proceeded to cite Matthew 18:6, which reads:

“If anyone causes one of these little ones—those who believe in me—to stumble, it would be better for them to have a large millstone hung around their neck and to be drowned in the depths of the sea.”

Hearing that preached from the same pulpit where I learned more about faith and spirituality made my skin tingle in disgust, fear and anger all at the same time. I felt so unsafe and unwanted among people who were supposedly family. I felt unwelcome in the home I had grown up in and spent years helping build.

Back then, it felt ironic that the preacher had chosen that particular verse to guilt-trip their congregation for being supportive of the LGBTQIA+ community when there are other actual issues the church should be affording attention to—like the rising number of extrajudicial killings, the rampant corruption and the widespread poverty that was ravaging Filipino families. But this unequivocal assault on queer people has never been surprising. Of all the things the Church could be vocal about, the institution and its people have consistently targeted homosexuality. And maybe, that’s where my newfound discomfort had come from.

Looking back at that sermon now, the message had clearly been intended to deter Christians from living and acting in solidarity with queer people. Rather than explicitly attack queer people who they could potentially “convert and save from themselves” (which honestly smells like conversion therapy to me!), the preacher had instead gone for their own congregation, reminding them of their great mission to save queer people from their queerness rather than support them.

Of course, this holy propaganda would sell. The entire schtick of contemporary Christianity is saving others from themselves in the same way that they saved themselves from their own sin. And supporting the LGBTQIA+ community goes against that entire thesis, which is something that queer Christians have had to wrestle and grapple with, oftentimes at the prompting of other Christians.

For instance, I’ve had countless instances where certainly well-meaning Christians had asked me how I reconciled being gay and being a Christian. Regardless of who has asked me, my answer has always been the same: what is there to reconcile?

Can queer Christians truly exist without instantenously bursting into flames upon setting foot in a church? I have never needed to extinguish sudden bursts of flames on my body during the countless times I’ve set inside my previous church. Have queer Christians just given up? Can’t speak for everyone, but after praying the gay away and still feeling the same way about guys, maybe we should start asking God what’s up. Seems like a them problem now, don’t you think?

But to be frank, if there is anything to reconcile about queerness and Christianity, it has been the dissonance in how Christians have related with queer people. That despite the supposed centrality of unconditional love in Christ’s life and ministry, Christians have consistently been proactive and enthusiastic in making it known that there is no place for queer people in their congregations.

And this is where genuine allyship is called for.

Christian allies must exercise their privilege to advocate for and amplify the voices of queer people. While private, intimate acts of allyship between allies and queer family, friends and co-workers are important, Christian allies must move their allyship beyond closed doors, private DMs or heart-to-heart talks, especially when the queer people around them are faced with overt prejudice and discrimination. This is especially important for queer people beyond our social circles because allyship isn’t only for the queer people we know. Allyship is solidarity with the people we may or may not know, in their struggles we don’t and may never experience.

It’s certainly difficult to go against the grain and counter the “homosexuality is a sin” discourse that has been, in my opinion, the major roadblock to queer solidarity among Christians. We all grew up hearing it. Some, if not most of us, might’ve even taught others to think similarly. But it’s in these instances when we’re being reminded of our biblical mission and reprimanded for our allyship that we need to return to the call to be Christlike.

Jesus communed with prostitutes and taxcollectors, the outcasts of his society. He reached out to lepers who were shunned from society and forced to wander outside city limits. He was consistently vocal against the blasphemy of the Pharisees and this eventually led to his crucifixion—arguably the most central event of the Christian faith. I am not asking Christian allies to have themselves be crucified in the name of Christlikeness. Instead, the takeaway here should be that Jesus lived in solidarity with the marginalized and oppressed.

So as we collectively retire our Pride merch—until next year—and prepare to face the approaching uncertain political climate, solidarity must become central in our allyship in the same way that it was central in Christ’s ministry. In the coming months, the LGBTQIA+ community’s place in Philippine society for the next six years under the upcoming administration will become clearer. The deliberations on the SOGIE Equality Bill, which failed to pass into law during the 18th Congress, is one arena where such clarification will certainly be observed. This, among many others in the coming years, will be an opportunity for Christian allies to keep raising their rainbow flags and evolve their allyship into solidarity.