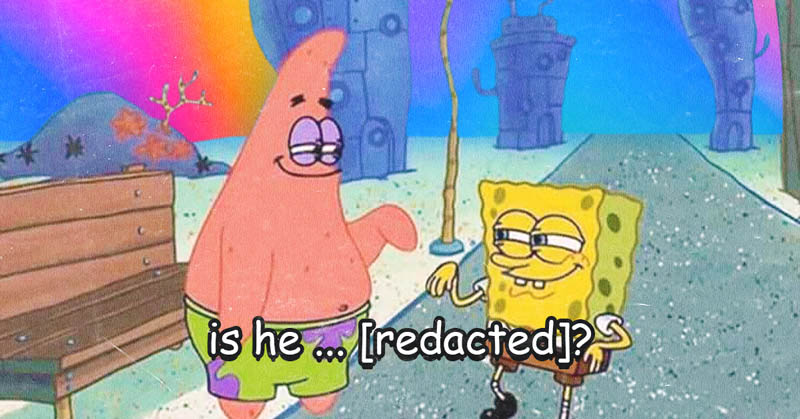 Nowadays, it feels normal to hear someone say “LGBTQIA+” in casual conversations, or to see a TV show character come out as queer. But growing up, these labels were only said in hushed tones or loud whispers. If people were to ever talk about someone being gay, it was almost like saying “shit” or “fuck”—bad words that kids shouldn’t utter or even be exposed to. And if people referred to you as gay, it felt like you were being cursed at. Because back then, “gay” was a bad word, and being called gay meant something was wrong—that you were wrong.

RELATED: What “Heartstopper” Teaches Us About Queer Representation and Solidarity

The first time I remember feeling uncomfortable as I heard “gay” used as an insult was in my first year of high school. Attending a Christian high school, we had the usual hellfire and brimstone sermons about homosexuality. But generally, the culture was incredibly homophobic. From people anonymously asking others on ask.fm if they were gay to using “gay” to refer to something lame or boring in video games; being gay in high school meant being at the receiving end of everyone’s homophobia—whether intentional or not.

As a closeted teenager struggling with my queerness, these experiences, among many others, had only instilled in my mind that being gay was wrong—a horrible sin against man and God. I tried “praying the gay away,” hoping that this was just my cross to bear and that I would eventually come out—pun intended—of this, healed and whole. But I continued to feel the same about guys, girls and people who don’t identify with either.

In the Philippines, queer people are subjected to prejudice and discrimination daily. From being refused access to essential healthcare services to being targeted with hate crimes for being identified as part of the LGBTQIA+ community, the country is far from being a safe place for queer Filipinos to live and exist in. And with the SOGIE Equality Bill undergoing another round of deliberations in the upcoming 19th Congress, the precarity of being queer in the Philippines remains a pressing concern for the LGBTQIA+ community.

How do we quantify being LGBTQI-friendly? Where does tolerance end and genuine acceptance begin? pic.twitter.com/AJU98ayuse

RELATED: How You Can Put LGBTQIA+ Safe Spaces on the Map

But even in the absence of lived experiences of discrimination, years of being told and taught that being gay is wrong has long-term effects on queer people’s relationship with themselves and their queerness. Queer people learn to anticipate prejudice and harassment in their day-to-day activities like riding the MRT or walking down the street. In response, they negotiate their queerness by focusing on other parts of themselves that are considered more socially acceptable, like being the family’s breadwinner.

After my supposed come-to-Jesus moment failed to “heal” me of my queerness, I had mostly stayed in the closet throughout high school in fear of being ostracized. Though some had already felt back then that I identified as part of the LGBTQI+ community, it was only in college that I sat down with my closest friends and opened up about my identity. But getting to that point where I was comfortable with my queerness took some time.

In my first year of college, I found myself conflicted about whether I should come out to my blockmates or not. On one end, none of them knew me. While I wouldn’t need to “break the news” to them unlike my high school friends, I also didn’t know them enough, which meant I couldn’t gauge how they’d respond to queer people. But I also felt that the idea and expectation of having to be in the closet—and then coming out—will only continue to reinforce the narrative that being gay was something to hide; and that if we didn’t do anything about it now, queer people would constantly find themselves in closets wherever they went.

So, after four years of consciously hiding who I was, I opted to simply be queer. I began openly agreeing with the women in my block if they mentioned this random guy from the college was cute. Though not a sign of someone’s sexual orientation, gender identity and expression (SOGIE), I started to raise LGBTQIA+ issues in my classes. And in a few instances that someone would ask, I would talk about being queer.

Some of my blockmates had politely asked why I didn’t have a big “coming out moment” with them. And I honestly asked myself the same thing. I guess we all thought that that was just part and parcel of being a member of the LGBTQIA+ community. And as my high school experiences show, staying in the closet has its merits when it comes to the safety and well-being of queer people. Because in a highly prejudiced and discriminatory society, coming out is, unfortunately, a privilege.

What has truly helped me be comfortable in my queerness and cope with my internalized homophobia was having other queer people in my life who showed me that being gay was okay.

Growing up, I’ve come to know several extended family members who identify as part of the LGBTQIA+ community. Of course, as a kid, I was told that their partner is just their “close friend,” in the same way that people talk about Achilles and Patroclus. But, looking back and seeing how our family continues to love and support them is life-affirming, giving me hope about my place in my own family.

Throughout my undergraduate studies in UP Manila, I also had friends who identified across the spectrum of identities. Our barkada was a source of strength and solace for our individual and collective queerness. Thankfully, I also had other friends and mentors who were proud and vocal allies of the community. The community I was a part of in college allowed me to feel safe around them and in my queerness.

College was also the time that I had found my passion and interest in research. I took every reflection essay, research paper and class discussion as an opportunity for me to further understand my queerness. By reading about the experiences of other queer people, not only in the Philippines but also abroad, I learned that I wasn’t alone and that people like me deserved to take up space in this world. Now, as an early-career researcher, I am learning more and more about the beauty and complexities of being queer among Filipinos.

Unlearning Is a Process

The positive queer experiences I had in college helped me begin this process of unlearning the harmful narratives I had learned growing up and was exposed to homophobia. And yes, this is a process—a long and painful one—because unlearning the negative attitudes and ideas we were taught about ourselves and our queerness doesn’t happen overnight.

It doesn’t help that queer people will continue to meet people who will respond negatively to our casual queerness, say backhanded statements about the LGBTQI+ community, or believe that our rights and our lives are up for debate. And these experiences will bring us back to the first time we heard “gay” as an insult.

While playing DotA with some of my high school friends a couple of months ago, we had matched against this player who had called me “gay” after having lost to him in a battle. While my friends and I had ultimately won the game, it was still disconcerting to have been called “gay” with the connotation that I was a less horrible player than them—actual game outcome and stats aside.

Hearing that had taken me aback because I felt that in 2022, we should all be doing better. But that experience had also taken me back to high school where “gay” just meant lame or stupid. Even the satisfaction of winning the game couldn’t trump the discomfort and anxiety I began to experience. Of course, that interaction spoke less about my queer self and more about the other person and the times we are living in. But part of my discomfort was about feeling so scared and lonely. After all the years I had spent coming to terms with my queerness, I felt so scared and lonely; I was the lost and confused closeted queer kid all over again.

That entire interaction reminded me that healing isn’t linear. We need to give ourselves time and space to identify and make sense of the harmful narratives and destructive ideas we were taught for most of our lives. It truly helps to have communities of care and support that allow us to feel our emotions, including those that make it seem like we’ve regressed, and ultimately remind us that we’ve come so far in our healing process.

We still need systemic changes that will not only protect the LGBTQIA+ community from being further discriminated against but will also affirm queer lives and their place in society. Not all experiences of prejudice and discrimination can or should be addressed by reframing one’s perspective. That’s why our calls for LGBTQI+ rights in the country remain urgent.

We need to hold accountable the institutions, like the media and our educational system, that are at the forefront of teaching generations of queer kids that there’s something wrong with being gay. Moving forward, our individual and collective efforts toward LGBTQI+ rights in the country need to be intentional in countering the harmful narratives about queerness that we have grown up with. Our initiatives—at their very core—must be unequivocal in letting people know that being gay is okay.