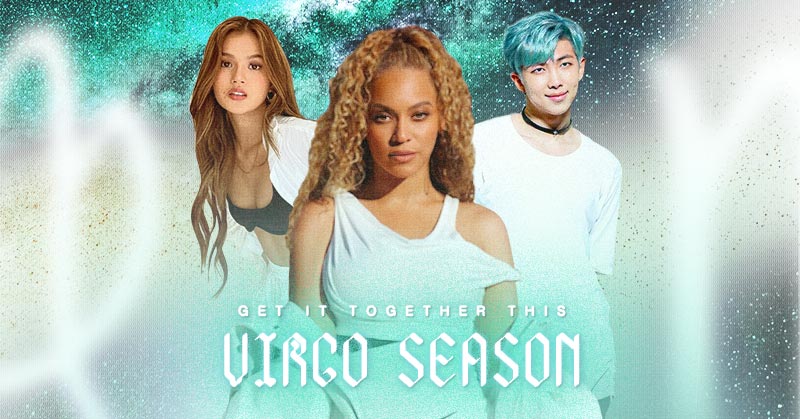 How To Get It Together This Virgo SZN, As Told By Our Favorite Virgos

Virgo season is a brand new slate for everyone

If you felt another shift in energy in the past few days, that’s because the sun has entered Virgo. Everyone is coming down from the high of main character syndrome that Leo season brought; we’re no longer embodying the fiery and upbeat lion. Instead, we’ll be channeling our maidens, grounded and analytical, from August 22 to September 22 of this year. The coming weeks will be all about getting it together without having to wait for the New Year. Virgo season is the perfect avenue to revisit our goals, especially about work, wellness and health.

It’s time to rethink routines and get our lives organized. Consider the coming weeks as brand new slates, whether it’s committing to getting better sleep or finally trying new workouts. Never mind that we’re in the last few months of the year; if you want to overhaul your life, then do it!

Much like the open Gemini, Virgo is a mutable Earth sign. This means that Virgos are quick to adapt to any circumstance thrown their way. Virgo season is the opportune time to explore detail-oriented projects, given the sign’s innate ability to be logical, analytical and assistive. Assess and troubleshoot potential issues before they happen. And if things go awry, be quick on your feet and find solutions to gain control of the situation.

Extend the same help and assistance to others, too. Virgos love being there for their loved ones. Their love language is offering advice and helping them figure out what’s wrong in all aspects of their lives. Yet in excess, this leads to the stereotype that Virgos are perfectionists, killjoys or overbearing. So check yourself before going ahead and giving unsolicited advice and aid. Mind others’ boundaries and know your limits to avoid sticking to the negative traits of the Virgo.

Ahead, we take important notes from our favorite Virgos on how to make the most of their season.

Dune and Malcolm and Marie star Zendaya is one iconic Virgo. She’s transformed from her humble beginnings as a young Kidz Bop star to one sought-after actress. Zendaya’s commitment to her work is admirable, much like the ever-reliable Virgo. In an interview with Vogue, Zendaya recounted how she became the producer for K.C. Undercover. She had a hand at morphing K.C.’s character and ultimately creating a character who showed the world that “There are other things that a girl can be.” She knows what she wants and how to do it in true Virgo fashion, which means you should too.

How can we leave out the mother of all Virgos? She’s probably one of the most predictable people on this list, but that’s because Beyoncé’s the living embodiment of the maiden. Get inspired to push yourself by doing some recommended watching: Beyoncé’s Homecoming documentary. Queen Bey knew what to tweak and adjust to deliver the best returning performance, from the greater picture to the tiniest details. But on top of being the poster woman of insane work ethic, Beyoncé reminds us not to push our limits until we break. Don’t forget that “done” is better than “perfect” this Virgo season.

Naomi Smalls is one iconic drag queen, especially after her run in All Stars 4. Drag Race and its spin-offs are always a game of adapting well to any situation, and Virgo’s flexible nature is often needed to keep the show going. We can definitely see that when Naomi Smalls takes the stage; she tries to do her best in each challenge so she could secure the crown. In case you didn’t know, she’s one of the queens who never lost a lip sync showdown in her season appearance, which means she knows how to shift into character once she’s onstage. Learn a thing or two about adapting and flexibility from Naomi Smalls.

RM is one of the two token Virgos of BTS, along with Jungkook. He’s articulate, intelligent and reliable. But beyond his skills as the leader of a global K-pop group, RM’s little habits also emanate enormous earth sign energy. His love for nature extends to his regular bike rides around Seoul to the point that he has his own term for it: Namjooning. It’s highly timely as Virgo season encourages us to step back into nature in any way we can as part of self-care. So let’s follow RM’s example and enjoy the comforts of the Earth. From the safety of your own home, try out plant therapy—RM’s personal choice is raising bonsais. For a less pricey option, may we offer growing mushrooms?

If we’re talking about Virgo’s quick-wittedness, Maris Racal has that down to an art that she ultimately goes against the “no-fun” image of this sign. Just scroll through her TikTok or tweets to know what’s up with her humor. But beyond poking fun at herself all in good heart, Maris also lends a helping hand in her own right by empowering women. Her song, Ate Sandali, is one example. Think of it as a letter from your favorite Virgo confidant telling you to stay away from red flags. So be that person in your best friend’s life this Virgo season, but don’t forget your boundaries!

There you have it: some tips and advice on how to get it together this Virgo season. Enjoy your new beginning and a clean slate!