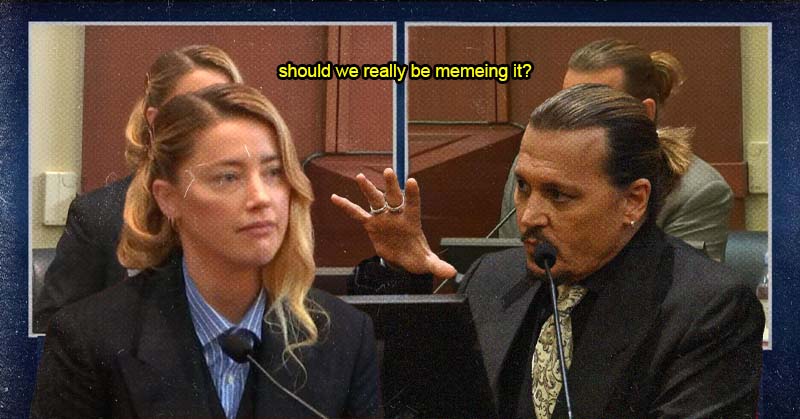 Should We *Really* Be Memeing Johnny Depp and Amber Heard’s Trial?

The internet shares their takes on the proceedings in the most expected way. But does it bring more harm than good?

When a trial or any integral proceeding goes public, individuals would likely respond to it through memes. From the 2022 Philippine elections to #FreeBritney, we’ve seen our fair share of jokes using screenshots and musical references. Of course, coping with humor and comedy— no matter how shallow or dark—has always been a go-to for Gen Zs and Millennials. But we need to discuss the possible repercussions it can bring. Most especially, in the case of the Johnny Depp-Amber Heard trial.

Like most people my age, I initially caught up with the trial through snippets posted on TikTok and Instagram before looking for a written recap online. But what kept me unsettled was the continuous memes about both Johnny Depp’s and Amber Heard’s camps that popped up right after. (Thanks, dear ol’ algorithm.) Fans used the viral meme utilizing Nicki Minaj’s Roman Holiday and Lana Del Rey’s unreleased Queen of Disaster to describe the state of both legal teams. One’s all over the place while the other remains cool, calm and collected. A Johnny Depp fan tried to replicate Amber Heard’s injuries to disprove her claims. While some moments were undeniably hilarious, I can’t help but feel unsettled with the number of memes on my explore page.

The Johnny Depp versus Amber Heard defamation trial aims to uncover whether or not the actress defamed her ex-spouse. The incident in question: her 2018 Washington Post op-ed. The piece details her quest as a “public figure representing domestic abuse” without naming Depp. Nonetheless, all the references point to her former husband. This supposedly hit the nail in the coffin of his failing career. Johnny Depp then sued Heard for defamation, wherein she retaliated by countersuing. The Cut provides updates for a cohesive and concise summary as the trials continue.

The trial’s proceedings and cross-examinations are available to watch through live broadcasts. This gives the public unbridled access to float the conversation on domestic abuse experienced by Depp. However, easy access also brings more opportunities for people to screenshot and liberally use them for memes. While it’s true that some happenings in the trial had us chuckling, the humor gets amplified more than a more pressing issue central to the court case: domestic abuse.

As the proceedings went well underway, the world listened to Johnny Depp’s and Amber Heard’s sides. Their statements painted graphic depictions of violence committed against each other. Yet instead of floating the awareness of domestic and spousal abuse, memes paint the two celebrities in black and white. The internet now sees Johnny Depp as an infallible man deeply wronged, and Amber Heard as an evil, evil woman, some content even becoming borderline misogynistic. Lest we forget: we’re still witnessing a trial where two individuals recount their experiences of abuse.

The constant memeification of Johnny Depp and Amber Heard diverts the attention of many. Instead of having essential and integral discussions, what people on social media are zeroing in on is the comedic scenarios they can conjure up whenever Heard takes the stand. They overanalyze all the movements and hand gestures they make. Heck, they even know that Johnny Depp is “unbothered” and “vibing” by blasting reggae music on the way to the trial. Some even put Johnny Depp on a pedestal, often engaging in uncritical fan behavior. (He also admitted not being proud about texting Paul Bettany graphic and grotesque things against Amber Heard.)

Johnny Depp won’t see your posts turning Amber Heard’s graphic rape allegations into a humiliating meme, but your friends who have survived sexual violence will. #DeppVsHeard

RELATED: What’s at the Root of Victim-Blaming and Rape Culture?

People consume this trial as if it’s a Keeping Up With The Kardashians episode. It’s admittedly upsetting to see them watch it and only pick up its hilarity. The two are engaged in a trial that sheds light on the domestic violence in their relationship. This isn’t a plot driver or an arc in a movie—it’s a very real problem. In the audience’s quest to consume this like fictional media, they forget that these are two individuals reliving dark days of domestic abuse. To provide evidence and context, victims unearth difficult memories. Imagine the emotional strain and trauma this brings to them. The memes might potentially water down the gravity of the situation. This might have victims may feel disenfranchised and demotivated to seek justice and tell their story.

Violence against women is a pertinent issue aggravated by the pandemic. However, we cannot ignore that men are also susceptible to facing abuse from their spouses and partners. Perpetrators, regardless of their gender, can instigate such violence. In the same manner, individuals are afraid to come out as victims of abuse. Women fear receiving hate and gaslighting from the public, much like what Heard is exposed to right now. Meanwhile, men fear being perceived as “weak” or “emasculated.” Domestic violence is a very real problem with material consequences to individuals. This is the most important message all should pick up when catching up on the court case.

RELATED: Rape Culture in the PH: To Be or Not To Be Triggered?

So before you press like on that meme calling Johnny Depp an “unbothered king” or a screenshot of Amber Heard’s crying face used out of context, think twice. If you take the celebrity component of the two humans taking the stand in court, will you make fun of them too? What if a close friend of yours has to recount dark days for the world to see. Will you still crack that joke?

I thought so, too.