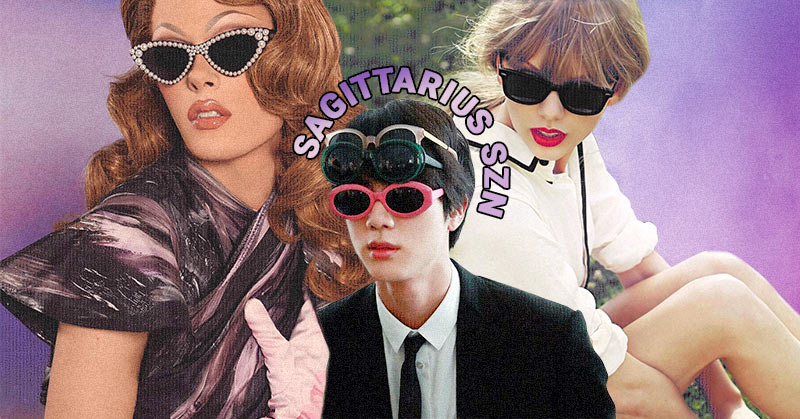 ‘Tis the damn season to explore

Can you believe it? Another four weeks have passed, and the sun no longer aligns with Scorpio. As of yesterday, the sun now sits in line with the courageous, easygoing and cheerful Archer, Sagittarius. So kiss the emotional intensity and extreme focus goodbye, because the Archer can’t be bothered with zeroing in on the details. It’s time to zoom out and broaden your horizons—we’re channeling our inner Sagittarius for the next four weeks during their season.

Jupiter, the planet for expansion, rules Sagittarius. This means that the next weeks provide the opportune time to work extra for the goals you’ve been manifesting the past year. According to Refinery29, you’ll be experiencing a lot of goal-related progress. And yet, there is a resounding but: don’t rush into binding decisions just yet. Instead, be open to options and take calculative risks towards your dreams. Wonder’s November 2021 cover star Ayn Bernos (despite being a Type A Virgo) dropped one of the biggest Sagittarius szn bombs, “…be stubborn about [your] dreams, but be flexible about [your] methods.”

Sagittarius season also offers the best time to be adventurous and look for the world beyond what you’ve known. Explore your surroundings, move out of your echo chamber and stray away from your comfort zone. Embrace openness, not only about internal changes and your goals but the perspectives you get introduced to—an open mind will get you through this season. And you know what goes best with an open mind? A mouth that speaks your truth. Whether it’s telling the world of the changes you’ve experienced, re-telling your story in your terms or the new things you’ve learned along the way, Sagittarius’ expressiveness gives you the platform to say it like it is.

A recurring theme in all these astrological readings would be: anything in excess will do more harm than good. For Sagittarius, their reputation precedes them—obnoxious, loud, quick-tempered and too opinionated. To avoid channeling their more negative traits, check how you deliver your opinions. After all, the openness of Sagi SZN gives us so much new knowledge we want to share. But remember: only give your opinions if your recipient is willing to take it all in. Oh, and if you’re delivering it nicely.

Need more tips on how to live it up during Sagittarius SZN? Let these celebs school you.

The Sagittarian trait of adventure manifests in Janelle Monáe. The multi-hyphenate musician explores many concepts and motifs through her music. By intertwining science fiction, her advocacies and her roots, Janelle Monáe creates stunning commentary covering class, queerness, racism and more. She even opened the 92nd Academy Awards with a number that called out the organizing body for snubbing actors of color who outperformed in films like Midsommar and Dolemite Is My Name. Don’t be afraid to explore new things—who knows, you might find your new niche or discover a new thing you’re good at.

There are people whose Astrological sun signs make sense, and Gigi Goode is one of them. From her campy outfits to her competitive streak, this Drag Race season 12 runner-up exudes peak Sagittarius energy in the best way possible. She’s outspoken and confident, but not too obnoxious and loud. Despite Sagittarius’s notoriety for hogging the spotlight, Gigi redirects all praise to her mother as far as her outfits are concerned. Be like Gigi Goode this szn, the perfect balance of self-expression without teetering too close to the edge of annoying.

According to the AstroTwins, one superpower for this season is humor, especially when things become overwhelming. Jin, BTS’s eldest member, is also known as the group’s moodmaker. Whether he’s walking red carpets with his bandmates or flying solo in a hosting stint, Jin has that magical charm that puts everyone at ease. It’s only later on that ARMYs find out that he gets pretty nervous, too, but he chooses to pull through to keep the show on the road. Just like Jin, keep going and laugh the stress away this Sagittarius season!

Taylor Swift is one legendary Sagittarius who leads by example about speaking their truth through some on-brand wit. Her lyrics are unapologetic, honest and clever—three qualities her sun sign exudes. But beyond her hard-hitting lyrics and catchy hooks is her shining optimism. After all, many of her hits have pretty painful backgrounds. Nonetheless, she manages to spin these into magical sonic experiences. Don’t be afraid to stand back up after a rough time in the coming weeks and beyond.

Euphoria star and plus-size model Barbie Ferreira joins the roster of celebrity Sagittariuses. Her free-spirited personality can be attributed to her sun sign, most especially how she worked towards being an actress. Her humble beginnings as an American Apparel employee-slash-model became the foundation for her acting career. Years later, she landed her breakout role as Kat Hernandez. Her career was built through a series of risks— some calculated, some not. So take notes from Barbie this Sagittarius season: be open to any opportunity, because it might just land you to where you want to be.

For an optimum Sagittarius season experience, protect your shining optimism and keep an open mind. Enjoy and don’t forget to live it up!