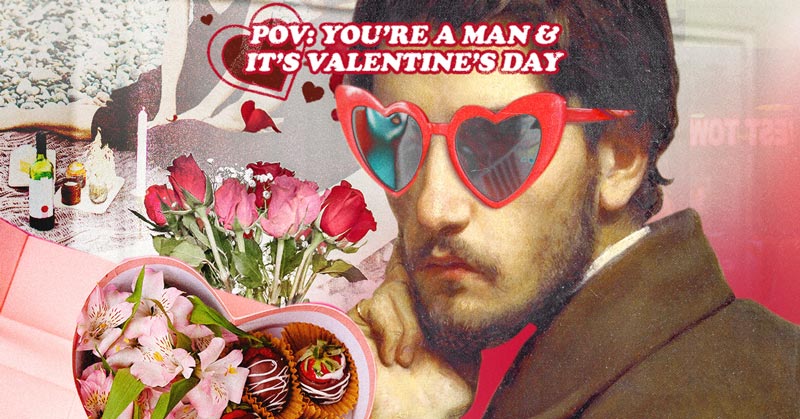 Valentine’s Day from a Male Perspective

In a few words: Valentine’s Day is unnecessary stress

Most importantly, I don’t hate Valentine’s Day—to detest that which is popular is the type of cynical fervor I left with my younger self, the guy that reread Catcher in the Rye at least four times and had Rage Against the Machine’s greatest hits on repeat. I have taken a far more mature perspective as of late.

With the exception of anti-vaxxers, motivational speakers, and people that frequently use the term “hubby,” I consider myself a tolerant individual. When it comes to this annual celebration of love, for instance, I have taken a far more mellow approach, one no longer grounded in antagonism and childlike pessimism—that Valentine’s Day and the weeks’ long hype that precedes it are not lame, just extraordinarily tedious.

Initially, Valentine’s Day is an annual occasion marked by consumerism and stomach-churning conformity. As a male with over three decades of life experience, it pains me to see my fellow man bumbling about, armed with floral bouquets, some heart-shaped paraphernalia, or supermarket-bought chocolates. Is this the status quo women really desire, to be the recipient of such a stunning lack of originality? Then there’s dinner, at an overpriced restaurant that advertises itself as “fusion;” a bottle of red wine, merlot probable—obligatory. I believe we a species deserve better, maybe by not feeling compelled to celebrate such a ghastly day, one more manufactured than an Olivia Rodrigo single.

In addition, February the 14th is also a stressful day, particularly if you are dating or in a relationship, wherein it requires an inordinate amount of mental preparation. Say you’ve been seeing each other regularly for a few weeks, do you give flowers or is that needy? But you don’t want to seem standoffish either, nor do you want to reveal yourself as a conventional simpleton prematurely—in which case, any vestiges of mystery you were hoping to attain would then evaporate at an undesirable place. Maybe you consult with a friend or worse, online, which invariably gives flawed, deeply cliché advice. We are living through a global pandemic; the added pressure is unnecessary.

RELATED: 2022 Dating Trends for the Single and Coupled

For the single, Valentine’s Day is just as tiresome of an affair, if not more. For one thing, it seeks (through social media, mainstream media, greeting card companies) to reinforce now outdated norms: that the path to true contentment is through a relationship or traditional romance. Hence, by established standards, being alone and unattached on Valentine’s Day is akin to waking up to a prison cell on your birthday. There’s nothing like the first two weeks of February to trigger your seasonal depression and borderline existentialism. Scrolling through social media exposing yourself to the seemingly endless bliss of acquaintances (and nothing else) doesn’t help either.

And really, is all the fuss, the emotional whirlwind, warranted? Scholars maintain the Valentine’s Day has pagan origins. An article from NPR states: “From February 13 to 15, the Romans celebrated the feast of Lupercalia. The men sacrificed a goat and a dog, then whipped women with the hides of the animals they had just slain. The Roman romantics were drunk. They were naked. Young women would actually line up for the men to hit them…They believed this would make them fertile.”

Above all, if this Valentine’s Day gives you anxiety or glum. Maybe its brutal origins will give you a sense of calm. Ditch the expensive flowers, log off social media, stay indoors; maybe get heavily intoxicated. Love after all is such a powerful emotion. In conclusion, cramming it in a single day is a pointless and understandably overwhelming exercise.