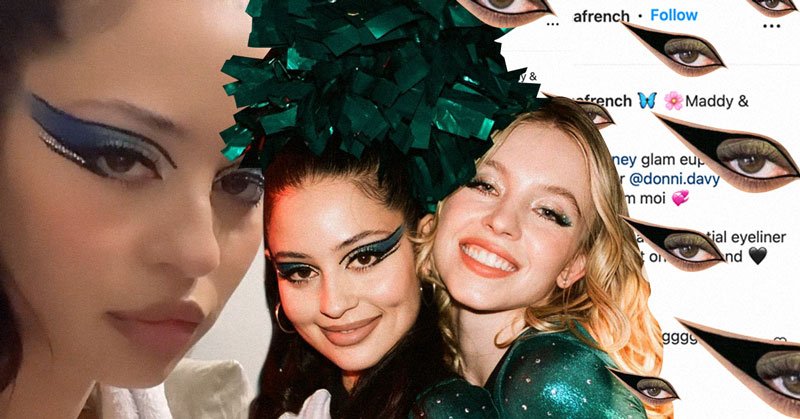 The Most Iconic Beauty Looks from Euphoria Season 2

The show that launched a thousand beauty looks

There’s no doubt that Euphoria—the most tweeted about TV show of the decade in America—has launched a thousand looks. Spearheaded by Donni Davy, the award-winning teen drama’s makeup designer, the show has inspired a creative movement among makeup enthusiasts and professionals, amplifying Gen Z’s obsession with all-out, fantastical makeup and beauty looks. Let’s not forget the glitter and rhinestones! The success of the show is realized in her upcoming makeup brand in collaboration with Euphoria and A24 Films, Half Magic Beauty, launching this spring.

More people are unafraid to play with color, making a bold statement amid a sea of minimalist, natural looks. As we close the second chapter of Euphoria, we take a look back at the best beauty looks of the season (to hopefully recreate) and the stories behind them.

This season, Rue and Jules’ relationship plummets as Rue relapses while navigating through her drug disorder, returning to her old ways. It’s pure chaos, but when it’s good, it’s good. The visually stunning montage celebrates the young couple’s love, recreating iconic love stories from pop culture and history. This includes the likes of Patrick Swayze and Demi Moore in Ghost, Jack and Rose from Titanic, plus John Lennon and Yoko Ono. Still, it foreshadows the trouble that’s to come.

Lexi’s metamorphosis—from neglected friend to brazen director of her own life—is this season’s most celebrated storyline. She’s no longer that friend donning a Bob Ross costume for Halloween; she’s breaking out of her shell, not taking shit from anybody. For this season’s looks, she dabbles in more Twiggy-esque looks, referencing the 1960s, that screams edgy but still a bit muted. She also wears bolder lip colors, ranging from a classic red to a deep berry.

Donni explains, “I wanted to give Lexi’s look it’s very own evolution this season that would make an appearance around halfway through the season, just as her confidence is growing and her play is coming to fruition. I didn’t see her makeup looks as necessarily getting bigger and bigger though, but rather she begins to hone in on unique little details that she can call her own.”

I have never, ever been happier! This Oklahoma-esque, Dolly Parton-inspired look on Cassie is giving country music star, but about to have a meltdown of epic proportions. The “ethereal soft” powder baby blue eye accentuated with exaggerated lashes is inspired by the ‘60s.

In her Instagram post, Donni shares, “For anything that calls for a retro look, I love looking at makeup ads and magazine covers from whichever era I’m going for.” She emphasizes, “I wanted this makeup to look beautiful and sweet on Cassie, and just a little bit babydoll costume-y. I love how her meltdown (aka @sydney_sweeney‘s performance) erupts and burns through this look, morphing it from soft delicate babydoll to something a bit more deranged.”

Best friends Cassie and Maddy AKA “Caddy” may have been beefing throughout the season because of one Nate Jacobs, but their history was revisited in Lexi’s play. In their cheerleading scene, Maddy’s signature winged liner and Cassie’s subtle gems get an upgrade. Halloween costume ideas, maybe?

Euphoria’s bold beauty looks this season continues to serve the script, Donni Davy tells in a conversation with Buzzfeed, contrary to what other people believe. She shares, “I’m in service to the script and the story and just getting the actors ready and to set on time, which is the goal.”