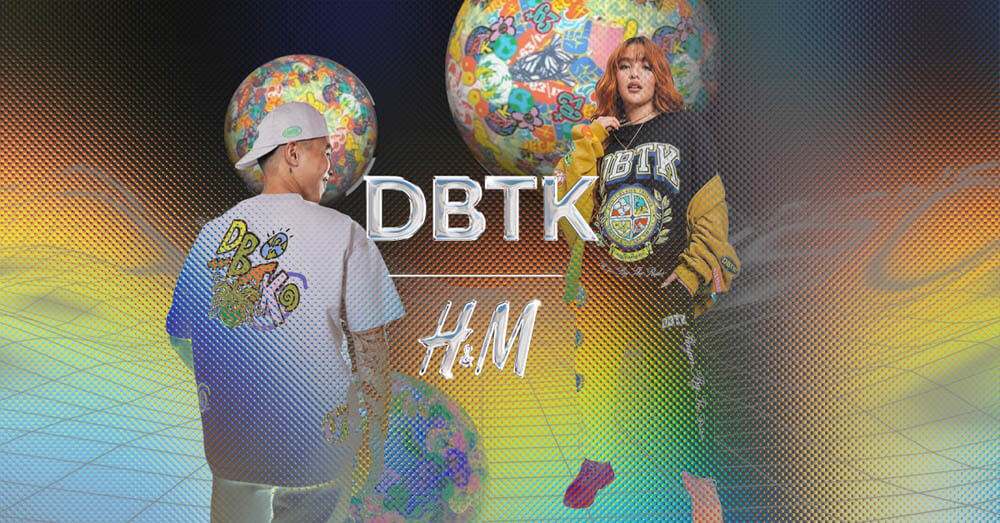 #StreetwearForAll: H&M Teams up With DBTK for Their Latest Streetwear Collection

It seems like Don’t Blame The Kids is on a roll. After spending the year with a couple of licensing collaborations with names like Pokémon and My Hero Academia, the local streetwear brand continues to drop campaigns that get everyone hyped. But perhaps one of the brand’s biggest milestones, not only for this year but for their 10-year run as a cult favorite streetwear name, materializes in their collaboration with global fashion brand H&M. This team-up marks H&M’s first (of hopefully many) Filipino-designed collections.

Six exclusive DBTK-made designs appear on an expansive list of muted streetwear staples, from socks and baseball caps to sweatshirts, hoodies and joggers. Themed “The World Is My Home” and “Streetwear For All,” the collection follows DBTK’s decade-old story. Co-creator Vince Javier shares the inspiration behind the exclusive prints appearing on the pieces. “This is the story of DBTK’s 10 years in streetwear. This is about our journey, how we manifest things and how we process things. For this collection’s six designs, the inspiration is our identities as persons,” he discusses. “[Emil] and I [have been] very passionate about creating things in the past 10 years, and I think that’s what the theme is all about.”

The DBTK x H&M capsule collection is one highly-anticipated release, garnering so much buzz and hype even before it dropped in-store last September 8. If the long lines camping out to cop the latest release are any indication, it seems like the collaboration is already a success.

RELATED: Yellow Cab and DBTK School Us on Building a Brand from the Ground Up

In an interview with Wonder, H&M’s Country Sales Manager, Frankie Shadbolt, shares that they approached Vince and Emil Javier for the collaboration a year ago. But everyone’s dying to know, why DBTK? Shadbolt explains, “I think that something that speaks to us right now, and we’ve learned a lot about ‘streetwear for all.’ This has been something that’s come more at the forefront, I would say locally but also globally. Knowing what [DBTK] stands for as a brand, their streetwear collections and the different collaborations they’ve also done, I think that was important for us in looking and searching for a brand to work with.”

Quite obviously, this team-up stands out from the rest of DBTK’s wide portfolio of brands they’ve worked with, but for a different reason. For Emil, it’s because the local team from H&M felt like they were part of the DBTK family. “It’s really easy for you to work with someone who gives you importance and is able to push you in creating something or to put your element in their brand,” he shares. After all, a partnership like this requires some sort of care from both ends to fully materialize and align with both of their visions. Their undeniable chemistry between the brands is palpable, and it even shows in the support for the campaign.

RELATED: The Oral History of NOBODY Clothing

But also, the team behind DBTK appreciates H&M letting them do their thing for the collection. “What makes this challenging and fun is that they wanted us to introduce DBTK and input it into their canvas and fabric,” explains Emil. “We made sure that the designs should also complement what H&M stands for. So this is a two-way partnership. Whenever you see this release, the first thing you’ll think is: this is an H&M and DBTK collaboration. This is not just DBTK being DBTK, it’s DBTK for H&M.”

In case you haven’t seen it, the DBTK x H&M campaign involves different faces, such as actress Andrea Brillantes, P-pop icons BGYO and even members of the DBTK Team. The diverse selection of personalities and creatives in one campaign was a deliberate decision, as it aligns with the theme of “Streetwear For All.” From humble beginnings in buying and selling sneakers and copping trendy clothes from Divisoria and Quiapo, Vince and Emil found their self-expression through creating a brand that is now DBTK.

“My kuya and I always share our dreams [with each other],”divulges Vince. “Every night, we share what we want after five years, ano yung gagawin namin bilang magkapatid (what we’ll do as siblings), and I think ito yun eh (it’s this). Binigyan kami ng H&M ng opportunity na ma-share namin kung ano yung Filipino creativity (H&M gave us the opportunity to share what Filipino creativity is).” Of course, this also manifests with the creatives involved with the campaign. While DBTK runs around 20 campaigns in a year with a team of eight or nine, they had the help of around 50 different people to mount this major release. “I think our team managed to be perfect, and as you can see in the campaign, it’s a successful one,” expresses Vince.

RELATED: 3 Ways to Dress up a Plain White Shirt

Of course, seeing the heart and soul of DBTK being uplifted not only by its followers, but the local streetwear scene and Filipino shoppers alike is a sight to behold. After all, who knew that a small, humble brand would blow up into one of H&M’s first Filipino designed collaborations? If there’s one thing we can learn from Vince, Emil and the entire community of Kids, it’s that determination and hard work definitely pay off.